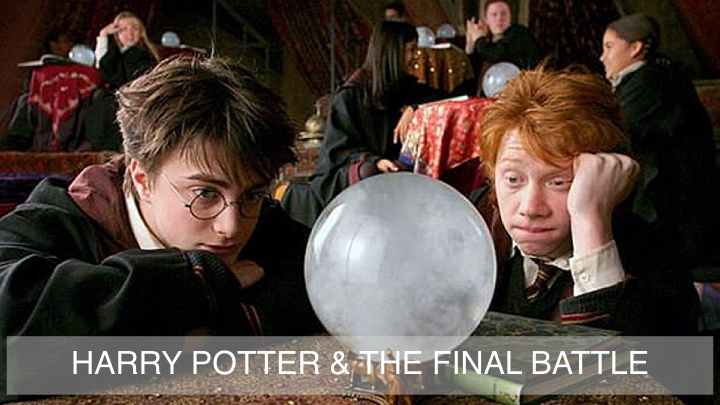 The instructional approach for teaching teachers is one of a narrative game interwoven with instructional moves and content called Harry Potter and the Final Battle. During the game the teacher (our learner) is asked to help Harry, our main character, in choosing the course that will be best suited for his learning needs. Harry will soon face Voldemort and to do so he must acquire new skills. The main difference between the courses, besides the instructors, are their learning objectives. Our intention was to show how important learning objectives are for a course. In the case of our game, if the learner chooses a course with poorly defined learning objectives, Harry fails to learn and therefore is unable to defend himself against his nemesis and dies.

Our instructional approach followed a specific sequence of activities and learning principles to enhance our learner’s experience. 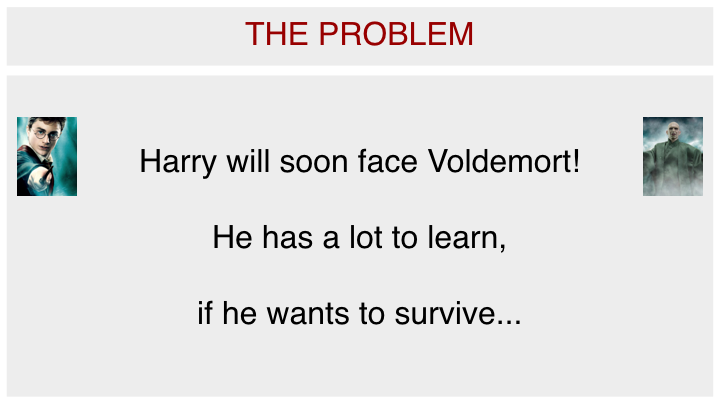 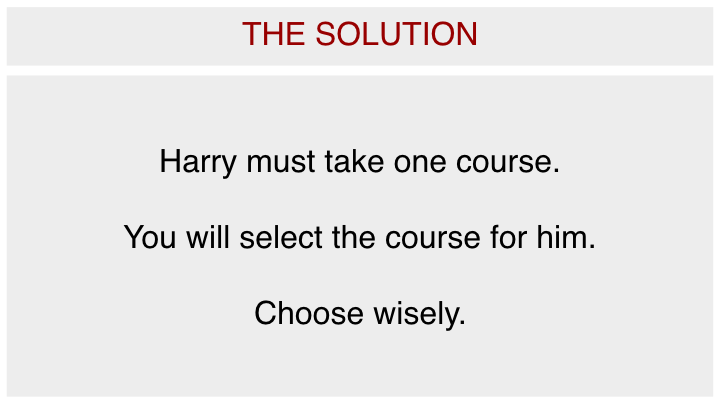 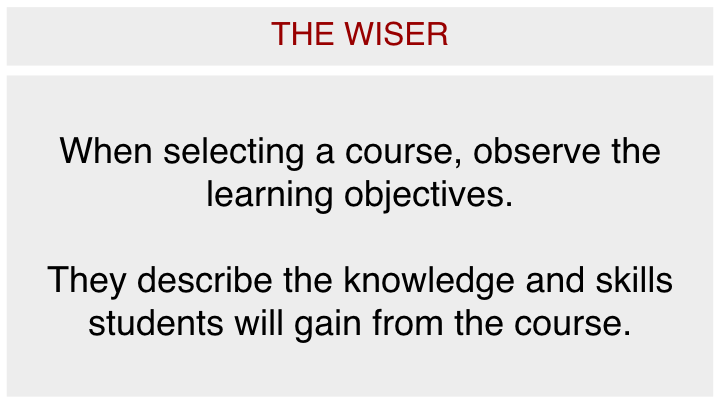 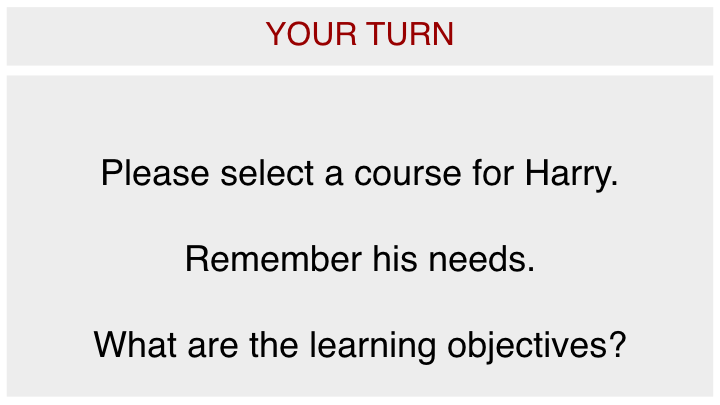 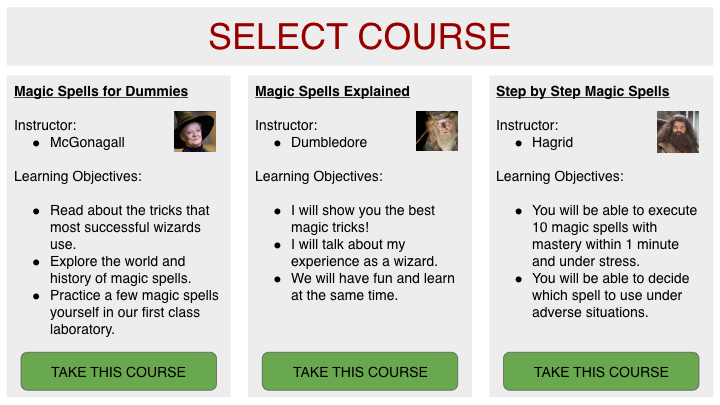 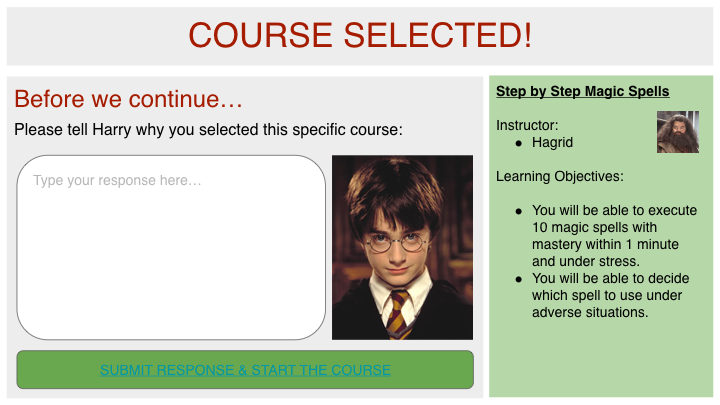 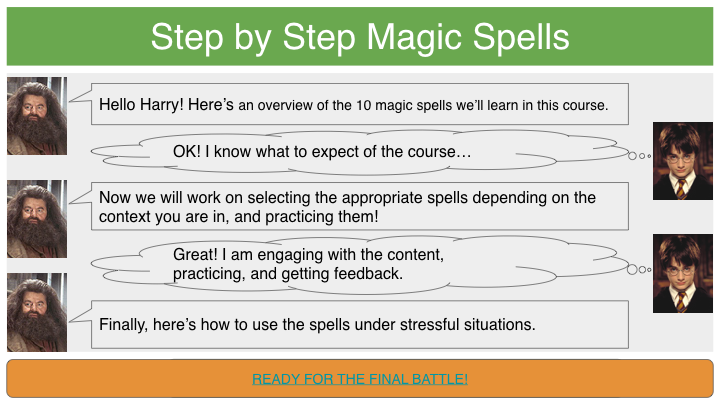 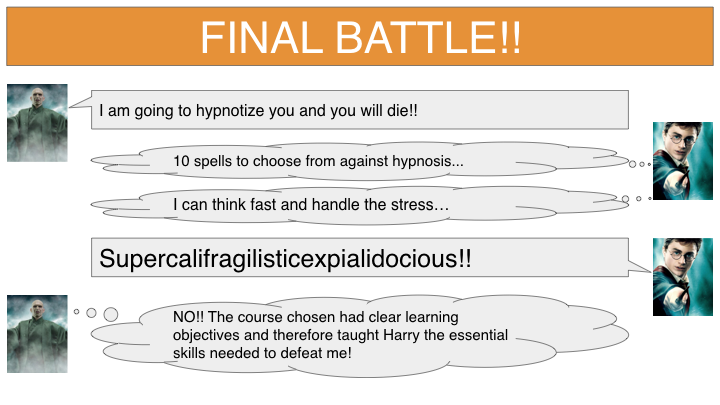 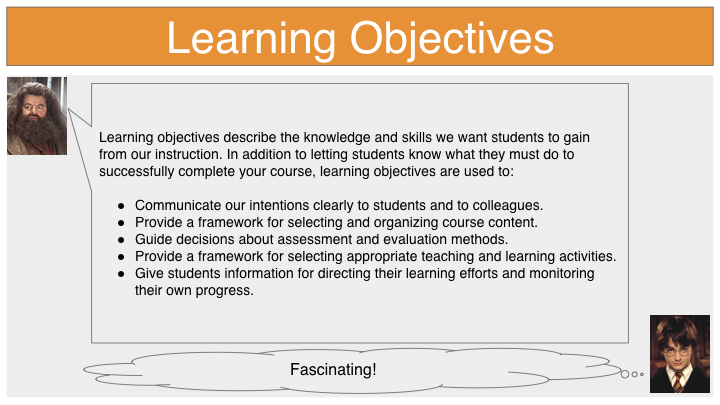 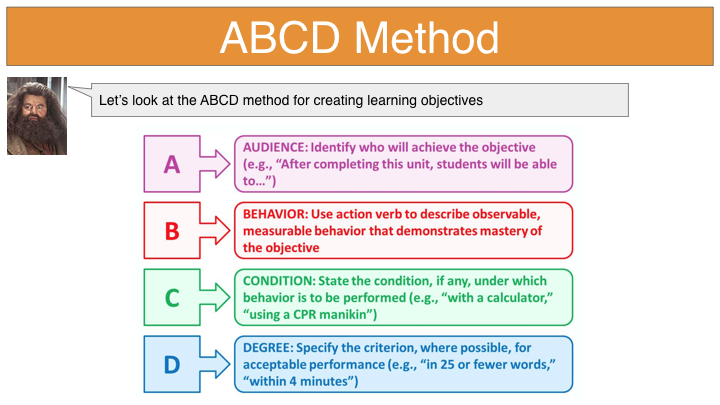 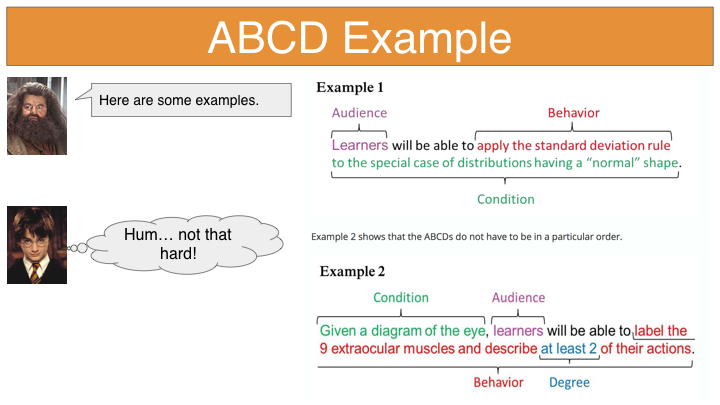 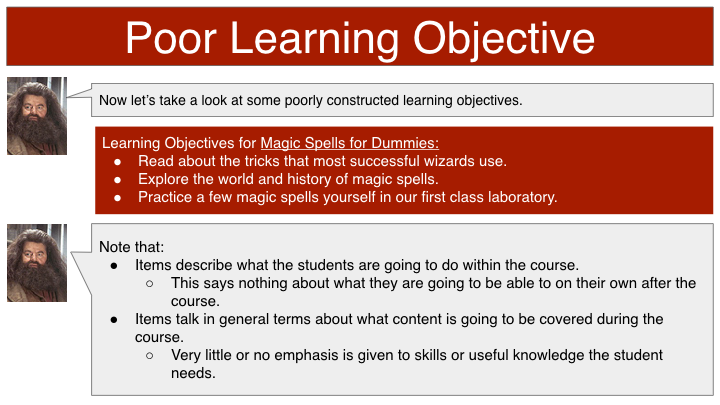 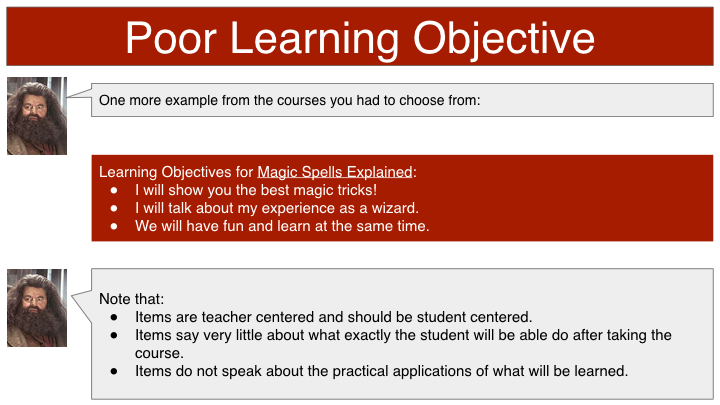 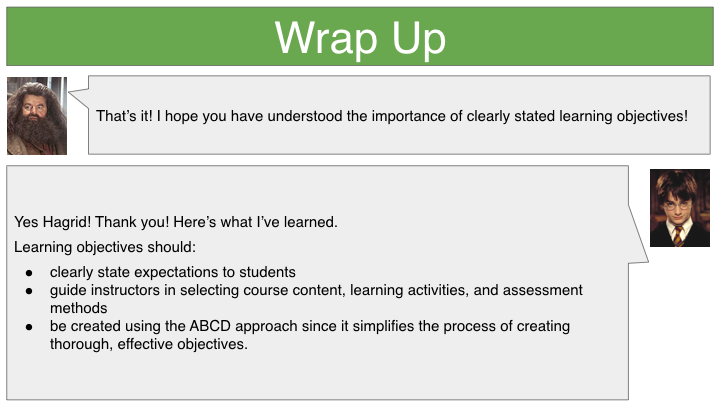 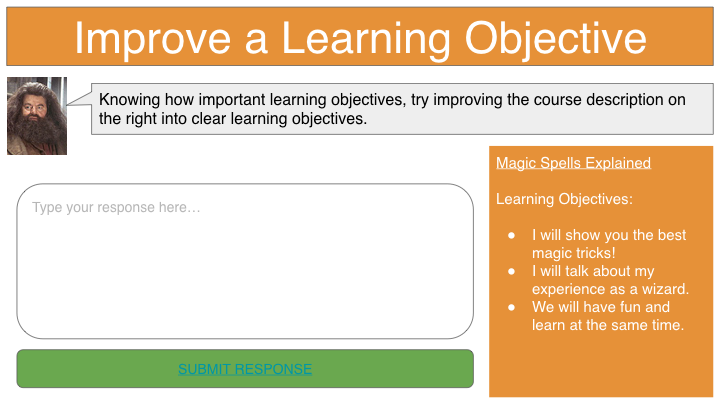 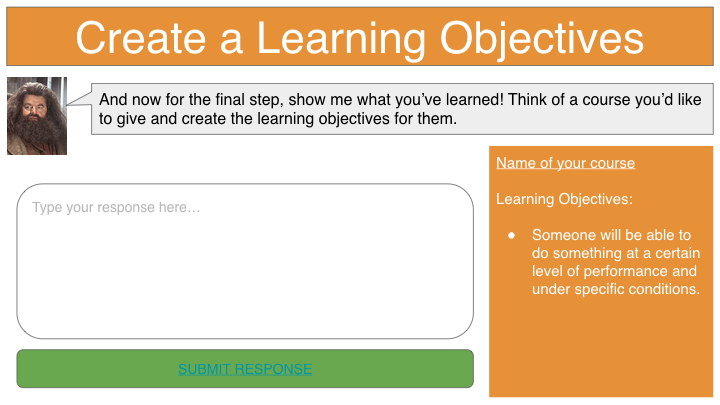 This overarching path was partly defined based on part by the elements of mastery (Ambrose, 2010) and partly defined by Bloom’s Taxonomy. The mastery elements are grouped in a manner that you need to start with some direct instruction to ensure the learner acquires some knowledge, followed by their interaction with the content through practice, and finally understand when to apply what they are learning. 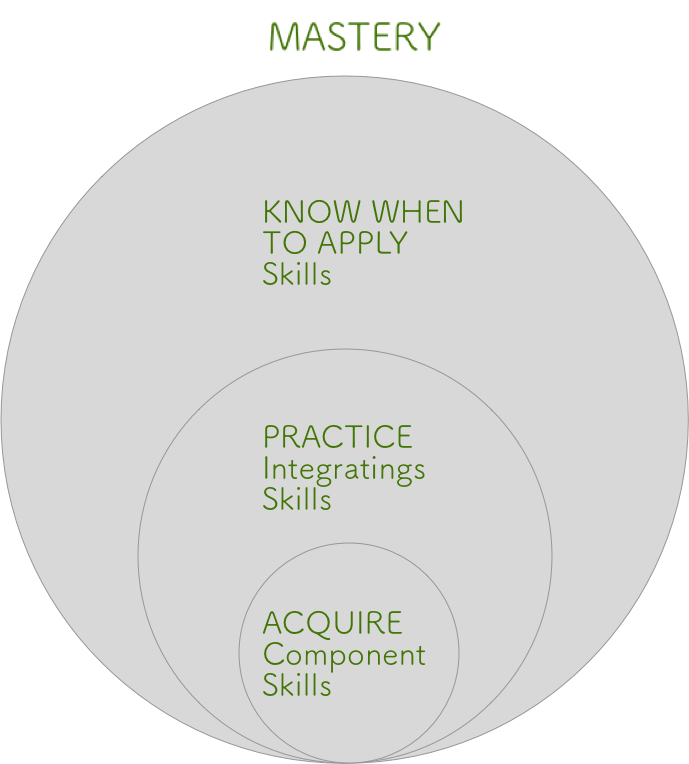 “To develop mastery, students must acquire component skills, practice integrating them, and know when to apply what they have learned.” (Ambrose, 2010)

In terms of game design principles, we decided upon using the following aesthetic models presented by Hunickle et al, 2004 and Schell, 2014:

Especially when designing the challenge of our game, we used the Lens of Choices (Jesse, 2008) for validation. We reviewed the following questions of the lens:

Finally, we recognized that the stages in the Development of Mastery had to be considered in our design. Given that our users come into the game with an Unconscious Incompetence where they do not recognize what needs to be learned, we prompt them explicitly at the start with phrases such as “When selecting a course, observe the learning objectives.” and directly explaining what learning objectives are. This moves them on to the Conscious Incompetence level where they know what needs to be learned. At this point the user goes through the activity of selecting a course, observing the final battle, and going through more content about learning objectives. We then present them with two opportunities to practice improving and creating learning objectives in the attempt of moving them into Conscious Competence, where they still have to think about what they’ve mastered. To reach Unconscious Competence, they would need to practice on their own to be able to just do it instinctively and forget how much they know. (Ambrose, 2010). This would be of course our ultimate goal with the course.

The feedback we received from the user testing was extremely valuable and triggered several design changes in our prototype. The biggest design change we implemented after the testing was to maintain our user within the Harry Potter world. Our prototype immersed the user into a fantasy world during the initial phase of the game but then jumped out into a ‘regular’ world where serious content was being presented. The jump was evident in terms of content and in terms of the design of the interface. We also restructured the sequence of content which was all being presented at the end of the game and moved some of it to the start. That made the learning objective of our own game more evident, clear, and explicit.

We also added another opportunity for practice in creating learning objectives after giving the user the opportunity to improve existing ones. Several additions in terms of content were made to improve the flow of the game and to make it feel more cohesive. Previously there seemed to be two distinct moments which confused our testers. Hopefully this new version resolves some of the issues.

and game research. In Proceedings of the AAAI Workshop on Challenges in Game AI (Vol. 4, p. 1).