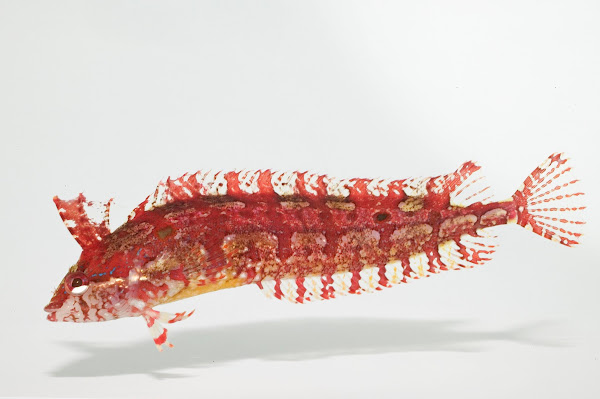 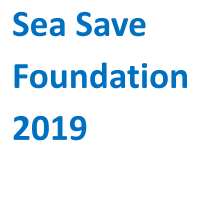 Impact Statement: Sea Save Foundation strives to protect our oceans by raising awareness about the beauty of marine ecosystems and their fundamental importance to human survival. We seek solutions, advance public policy, and drive advocacy. 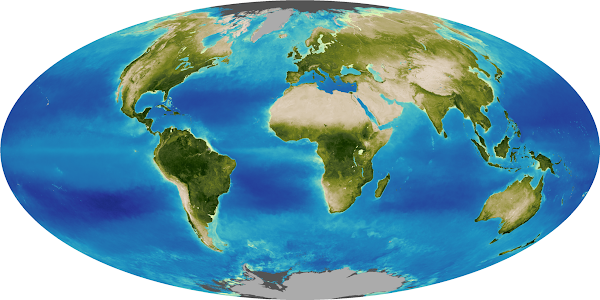 "Our oceans do not recognize political boundaries.  We must work globally to realize success." 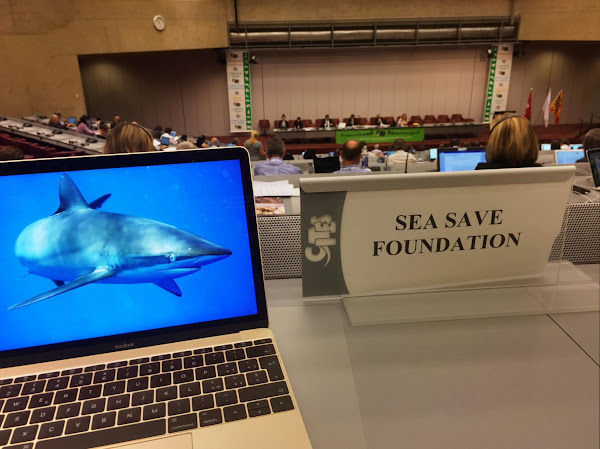 Marine animals do not recognize political boundaries. Many species migrate and cross international borders.  We must have international agreements in place if we are going to successfully protect threatened and endangered flora and fauna as well as ensure healthy oceans for the future.

Advocacy means fighting to defend and protect that which you value. Sea Save Foundation believes in taking information to build knowledge, and using knowledge to take action to protect the oceans. CITES, the Convention on the International Trade in Endangered Species, is one of the international platforms where Sea Save Foundation courageously wages battle to protect threatened and endangered species from extinction. The Conference of the Parties of the Convention on International Trade in Endangered Species of Wild Fauna and Flora (CoP CITES) is where the international community convenes to discuss, debate and decide which species warrant some level of protection via international trade restrictions. The Sea Save Foundation team prepares and attends these high level international meetings. We study the proposals and create knowledge translation materials for delegates, who may not understand how a loss of a species could impact their country. We work with other non-governmental organizations, scientists and delegates to explore the science and policy surrounding each species.

CITES is a critical international meeting where member nations decide which animal and plant species should be protected. Scientific evidence is produced and a delegate vote decides if proposed species should be treated as threatened or endangered.
While CITES has no authority over how animals are managed within a sovereign nation, the decision of the CITES majority affects how the species (dead or alive) are treated at border crossings. The member countries from around the world join voluntarily and their adherence to the decisions is voluntary.  Much like the Paris Climate Accords, CITES decisions are carried out based on monitoring and public reporting.  CITES convenes every year with voting every third year. SSF has attended for the last 9 years and during this time we successfully ushered many marine species on to the Appendices.  This year, we attended the 2019 Conference of the Parties in Geneva. This year we worked to prevent the removal of previously placed species from the Appendices prematurely. We have never lost a species that we fought to keep on the Appendices. We also fought successfully to have long and shortfin Mako sharks, guitarfish, wedgefish and some sea cucumber species protected by appendix listing. SSF was also part of the Working Committee that wrote the proposal to add Mako Sharks to the Appendices. 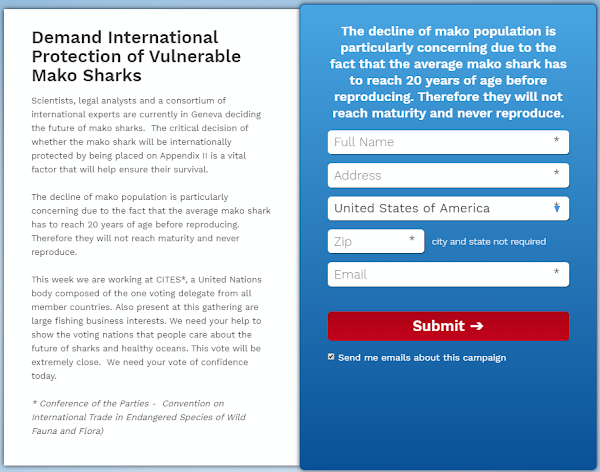 Raising awareness and educating people about ocean conservation issues only serves as a source of frustration unless we provide solutions.  Using our online toolset we connect the public with decision-makers who can immediately effect change.

This year we held multiple campaigns:

Email campaign - Over 50,000 people from around the world sent a clear message that they wanted Mako sharks placed on Appendix II. This was a contributing factor to the successful placement of this species on the protected Appendix II.

Twitter and Email campaign - Canada was the first G7 country to pass a federal ban on shark fins. We want to see the United States become the second.  We are very close, with a bill that has passed through both the Senate and House appropriates, we are now awaiting a final floor vote before this bipartisan bill can be sent to the floor for a final vote.  If this is not executed before January 1, 2020, our efforts will be wasted. 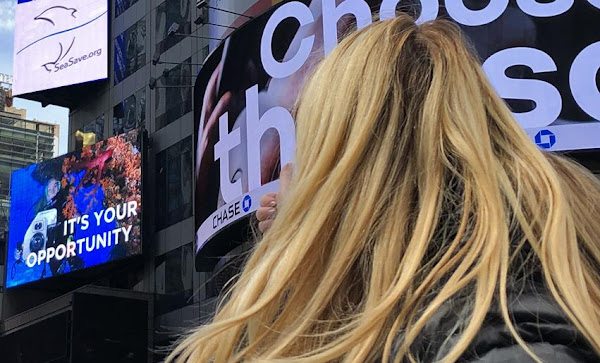 Our wired world has left many people feeling over-scheduled, leaving little time to keep up with critical issues, including the state of the oceans.  Lack of time to seek out important ocean information can result in lack of knowledge, indifference, and inaction. A poorly informed population will not push back against bad policy and dangerous decisions by local, national, and international leaders.

Part of our mandate is to raise awareness about marine conservation in the public sector.  Just like companies selling products, we have used our modern media, marketing and social networking tools. To that end, we created ocean-friendly, informative advertising.

Sea Save Foundation partnered with a Times Square billboard marketing firm. Times Square is visited by over 50,000,000 people per year. We projected our conservation messages in Time Square to educate those passing through. This exposure will grow throughout 2020. 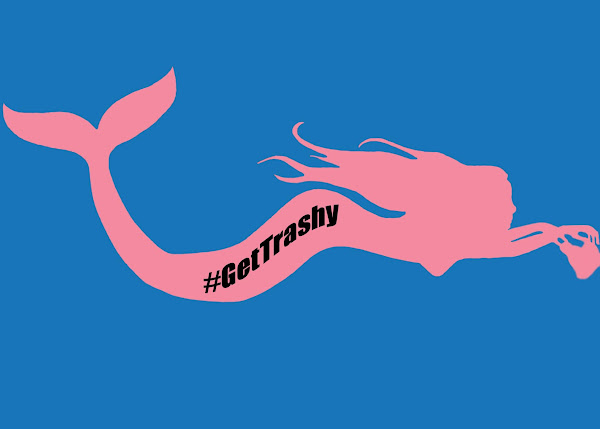 Get Trashy – Beach Cleanups for the 21st Century

Around the world trash and particularly plastics are finding their way into our oceans.  Sea Save Foundation is working hard to try to stop the production and unsustainable use of single use plastics, but we also need to clean up the existing waste from the land, freshwater streams and rivers as well as oceans and beaches. Current beach cleanups are great, but they require people to clean up at a predetermined time and at a specific targeted geographical place, leaving many close to home trash build-up sites unchecked. Get Trashy is a way to join the ocean advocacy community and show, via uploaded video, the scope of the cleanup you completed for the week.

Get Trashy is a weekly personal challenge to the worldwide ocean advocacy community to clean up our waterways. Through weekly Sea Save Foundation videos we will be asking and inspiring people to get involved by dedicating just a few minutes of their day in efforts to clean up waterways in their communities. By removing trash from a lake, river or ocean, individuals could improve the water quality, improve the environment for local inhabitants and look to better the aquatic ecosystem. The videos will encourage people to participate no matter where they live - near the beach or in a city - as we must start somewhere if our aim to clean our oceans and planet. We will encourage people to create and post their videos or photos of their cleanups, tagging us (#seasave #seasavefoundation) as well as encourage people to use the campaign hash tag #gettrashy to create a compilation of all efforts.

Get Trashy is a personal challenge that’s intended to be a catalyst for individuals and groups to initiate clean up activities in their communities and post the results on Facebook and other social media forums. Sea Save Foundation will post videos asking people to do a personal trash pick up this week and to post a video or image of their outcome.  The location, time, and scope are up to the activist, creating a more flexible approach to the traditional beach clean up.  Posting resultant images or videos is a way to show outcomes and inspire others to do the same. In addition to the flexibility of choice about time and location, Get Trashy promotes making advocacy clean up of trash something that can be done weekly or as frequently as the individual desires. The individual flexibility and digital video posting opportunities makes Get Trashy this generation’s answer to the traditional beach clean up. #GetTrashy is a virtual call to action.  Want to do a beach cleanup?  Great! Do it.  Then post pictures or video of your effort and upload your effort to social media with the #SeaSave #GetTrashy tags.  You will be part of an international groundswell effort of people pitching in to clean up the oceans!

Our wired world has left many people feeling over-scheduled, leaving little time to keep up with critical issues, including the state of the oceans.  Lack of time to seek out important ocean information can result in lack of knowledge, indifference, and inaction. A poorly informed population will not push back against bad policy and dangerous decisions by local, national, and international leaders.

Every week the Sea Save Foundation team researches and vets the critical stories from the last seven days. We use only reliable news or primary sources. We weave the critical facts into a few tight sentences and present this “Week in Review” to our audience via our blog and social media platforms.  By investing a few minutes each week, readers can stay abreast of current scientific breakthroughs, challenges, and advocacy efforts and incorporate this information into their understanding of the ocean. People want to do the right thing and want to protect oceans; we arm them with the information they need to best further these efforts. An informed public will choose to support sound policy that promises secure ocean futures.

Knowledge Translation - Often scientists write in a language understandable only by their colleagues. We breakdown stories published in peer reviewed journals and reputable publications in a way that is understandable and interesting to the lay reader.  We write entries using language that captivates and engages our readers. Information can contribute to knowledge and knowledge can result in action to protect our oceans.

The Week in Review is published on our blog every Friday. We optimize post time so that it can be read during the morning or afternoon commute. The Week in Review post is segmented, each portion containing an individual news story.  Each summary is about four sentences long, contains an illustrating photograph, and a hyperlink where interested readers can dive in to discover more details. The Week in Review is then posted on all our social media platforms (Facebook, Instagram, Twitter, Linkedin, SCUBABoard, Snapchat) We also promote this body of work by sharing it with our strategic partners so they can disseminate it to their networks.

The Week in Review is an essential weekly read which makes it possible for even the busiest person to stay abreast of all the breaking ocean news.