This article was originally published at CRIAViews, the blog of the journal Cambridge Review of International Affairs, in August 2015. The website has since undergone substantial redesign, and some of its archives appear to be lost. Consequently, the article is republished, exactly as it originally appeared, here:

One of the more memorable experiences of my first days at the Department of Politics and International Studies (POLIS) was a panel discussion on the humanitarian and political crisis in Syria. The panellists all agreed that Iran was a dangerous influence in the region, and that despite the then-recent election of Hassan Rouhani as Iran’s president, its foreign policy would not, could not change without regime change. Ironically, during the very hour of the panel discussion, the British government would take its first steps to normalizing diplomatic relations with Iran, largely in reaction to the election result.

The audience members seemed largely to share the panel’s dismal view, and a reader of Western press coverage of Iran at the time could hardly blame them. The unique nature of the decades-long diplomatic freeze between Iran and the West ensured that most Western coverage was written by reporters who had never been to Iran or interacted with Iranian officials. It was, in the estimation of one reporter, “sensationalized.” The story of the nuclear agreement is thus also the story of how the West(ern press) was won, and how it took the public and politicians with it.

There were several broad categories of reporters who covered the talks, and they played different roles.

First, there were Iranian state media, there to communicate carefully targeted messages from the Iranian delegation to the Iranian public, especially to hardliners, in order to show that the Iranian diplomats were both working hard on a deal, and also standing tough against the Americans. One reporter recalls, “From a media perspective the Iranian delegation would get more information than [the Western press] were getting. There was a drumbeat of releases, every day there was something, even if it was just pictures in the hotel suite and no news. They were managing domestic expectations for success but also for a failure. To be able to say, ‘It’s not our fault, it’s not us who’s walking away.’ ” 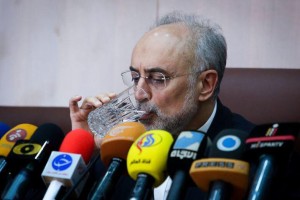 Second, there were American journalists who cover, as a beat, the State Department in general or a particular diplomat, and travel as part of State Department press corps. For these reporters, who approached the talks as John Kerry’s personal struggle, the exposure to Javed Zarif as a sympathetic personality was decisive, and several journalists told the Cambridge Review of International Affairs, deliberate. “There was this idea of him being so dramatic, coming out onto the balcony. He would smile and laugh and shout down to reporters. With Kerry they would place the flag, the podium, his remarks, his water. It was very ordered. Even in meetings, you’d see photos of Zarif with no documents, just a smartphone in front of him.” As outsiders to the Iranian nuclear issue, these reporters stood in for the American public and their shifting perspectives – influenced at least in part by the relatability of Zarif – reflected and shaped the domestic public approval of the talks.

Third, there were several of a new breed of journalist, foreign policy specialists who write not for major newspapers but for niche online diplomacy journals whose readers know who Federica Mogherini is without the aid of Google. These reporters covered the talks continuously (“a week a month for two years”) whether the high level negotiators were present or not, and relied heavily on the personal rapport they built with their Iranian colleagues.

“Since are all following each other on Twitter,” recalls one such expert, “if the Iranian journalists have been told something, we can all bring it to the State Department’s attention in five seconds. There was a parallel engagement on the journalistic side. I don’t think it was totally unrelated to the diplomacy; the two ministries couldn’t ignore that we were triangulating.”

Indeed, several reporters recalled being leaked information by the Iranian officials, asking the American delegation to confirm it, and finding it was news to them. This kind of use of the press pool, especially the specialists, as backchannels was most common when the talks threatened to stall, with the Iranian leaders seemingly using the press to keep the talks going. And it worked: “Often the US spokesperson would let a false report go, recognizing there was a reason the Iranians said that.”

Together, these processes of communicating with the domestic public, building personal ties with journalists from other countries, warming to foreign negotiators and taking part in backchannels, turned the journalists into stakeholders. In the final days, a much tweeted and hardly scientific poll of the press awaiting an announcement from the diplomats showed the majority both expecting and rooting for a deal, with one diplomat quipping that the press “are more optimistic than we are.”