This document is fairly long (but worth it!), so a brief table of contents…

Open up CNet, and tap on the hamburger menu to enjoy a really painful jank during the nav slideout:

Up front is a lot of JS cost adding latency before we see any effect. Then a 200ms-long animation that appears to do layout in every frame.

Clearly, we’ve blown our Midnight Train budgets of 100ms for input latency and 6ms of work per animation frame.

Let's dig in and see what's up!

Let's zoom to the first chunk: 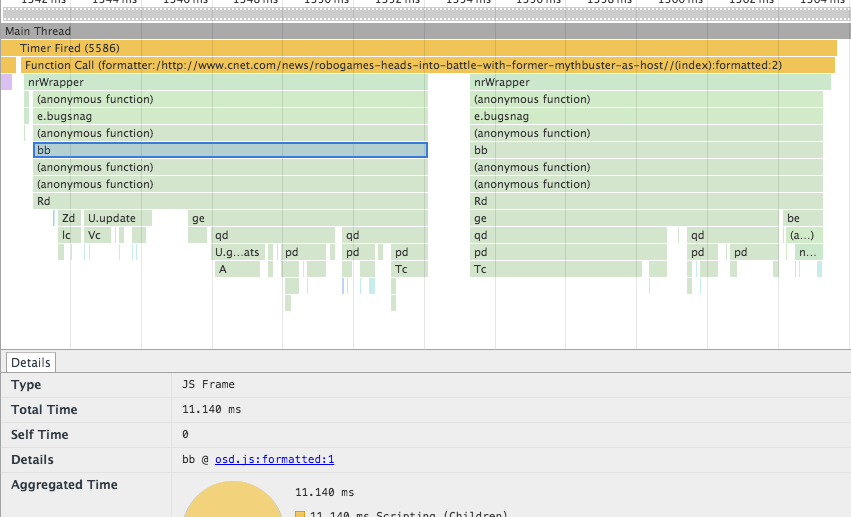 It's Google Adsense doing 24ms of work, every 1000ms. But in this case it fired right as my finger hit the hamburger icon.

Next, we have some mousedown handlers:

Looking closer, one of the handlers is some event delegation looking for a very specific selector ([data-user-show] which I've never spotted in their DOM). But, obviously handling this mousedown delays every touch.

Finally we get to the click handler that does the work:

The revised flame chart coloring (by file) makes it easy to see our code vs jquery.js.

Clicking into the layout we see that our layout thrashing comes from the same source line (118):

They're using a class on the <body> to trigger the effect. Obviously this invalidates the style & layout for the entire page. :/

Then, they curiously call scrollTo(0,0); This is to jump the page back to the top of the screen because the nav, at rest, is positioned up there:

However this scrollTo(0,0) ends up forcing a 25ms layout they probably didn't need.

Once the "m-view-nav" class is in place, the animation gets triggered.

The nav panel  gets a CSS transition on layout property left: 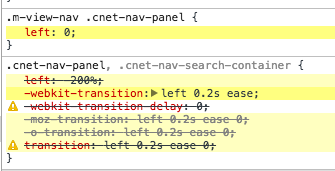 And the content-panel also shimmies to the left as well: 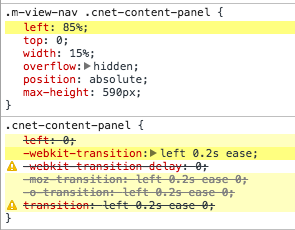 So they have two elements, independently animating with the same duration, and hopefully it looks like they move in concert.

Watch the full 60fps video of the 15fps sidenav slide.

Fling it to scroll it. We'll scroll at maybe 13 FPS, if we're lucky.

We have some touch handlers that push us into slow scrolling mode.

Plenty, plus a lot of handlers on scroll itself.   This scroll handler below was on the shorter side (21ms) of ones I’m seeing (avg 35ms).

I investigated each handler to see what they’re up to:

All of these run on every scroll event. It appears that the scroll is blocked on completion of these handlers.

NewRelic wraps around every event handler in the page and grabs Date.now() on both sides of each.

Every 500ms, Yahoo Ads runs this, querying scroll and size metrics of their iframe.

Every 1000ms, another Google Ad network runs a good amount of JS.

My favorite: a loading spinner, that’s a canvas element, is rotated with css transforms every 42ms, via setInterval. 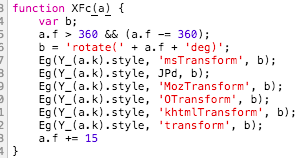 Scrolling time.com/3703410/uma-thurman-face-red-carpet/ during loading on Clank is a great devil case. I regularly see it paused for 5 seconds.

I recommend you turn on “Show Touches” in Developer Options. You can leave it on permanently.

It helps you evaluate latency between Android OS receiving your touch and the result.

For this audit we won’t look at scrolling during load, but just a scroll fling, well after the page has loaded.

Looks like a lot of JS. Let’s validate its the JS causing the problem. Turn on Show Scrolling Bottlenecks: 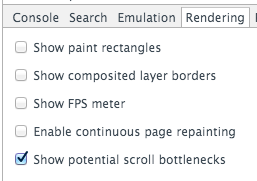 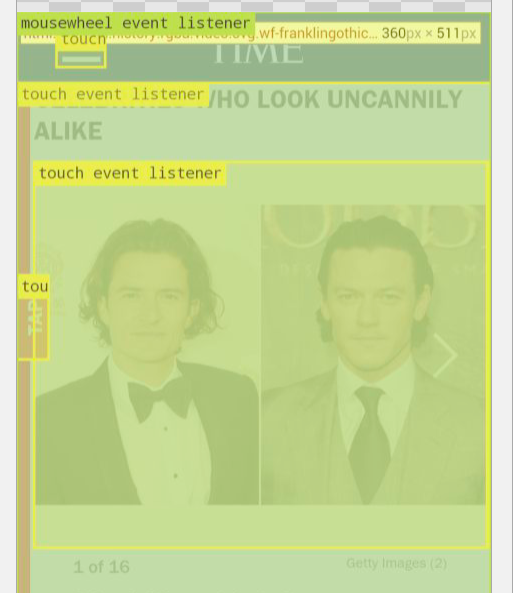 We’ve got a mousewheel handler somewhere. Hard to see exactly where, though.

We can actually look a little deeper here.

If I record Timeline with Paint checkbox checked, we can inspect the layer tree and investigate if any have scroll scrolling behavior: 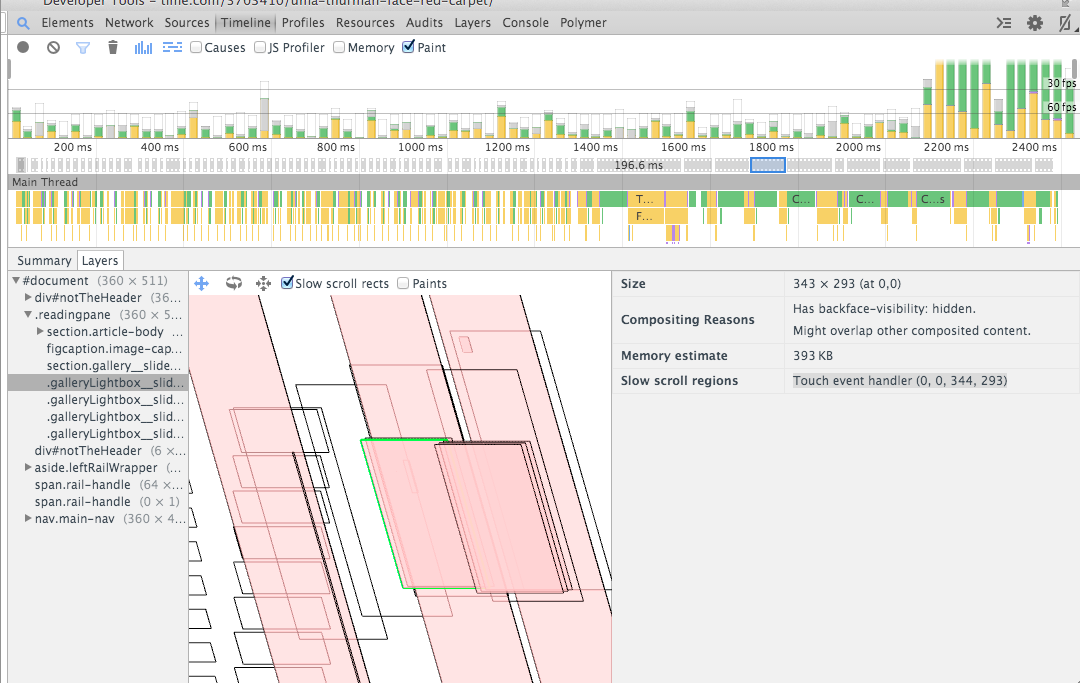 It’s telling us we’ve got at least a gallery lightbox with a touch handler. And all that pink indicates more than just that element has a slow scrolling reason.

So, Let’s see what’s going on in our blocking event handlers

I wasn’t happy with all these handlers so I nuked them all to see a difference.

You can navigate all event handlers via the listing per element or use the Console to grab them and trash them. 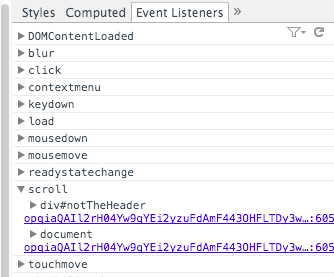 After looking at the yellow haze of unclean slow scrolling for a while,

the event handlers are gone and the content emerges. 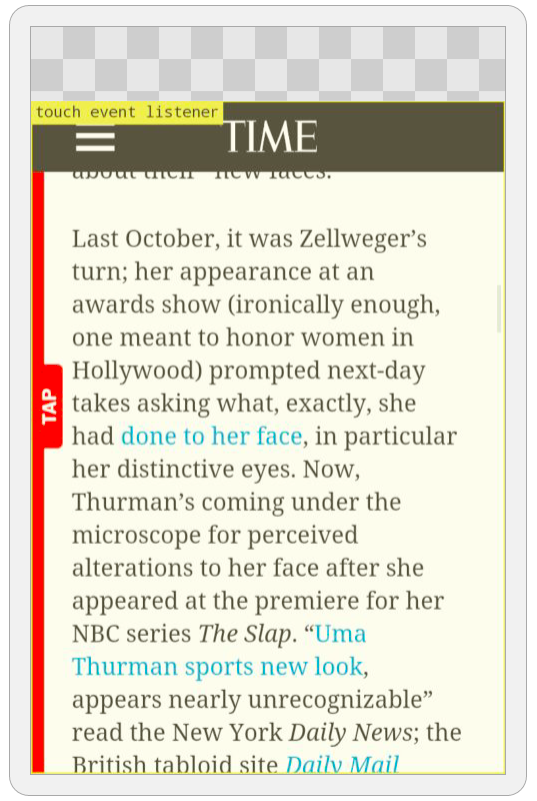 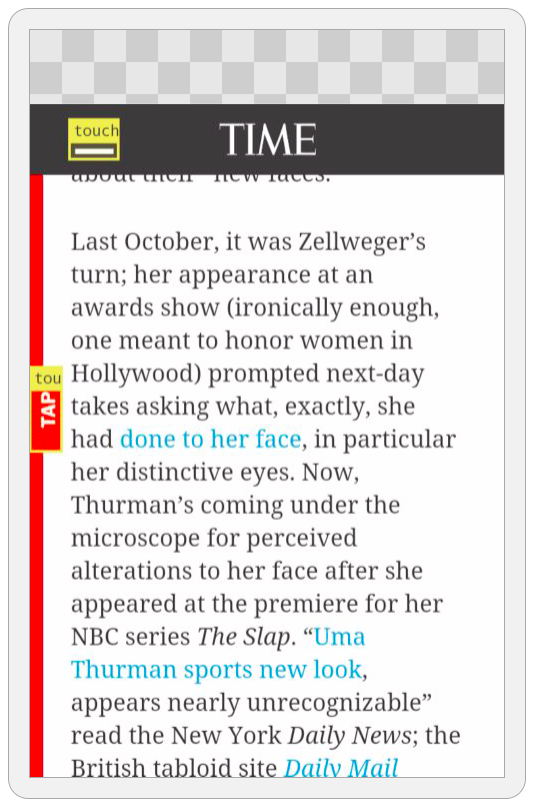 Before and After Heavy Input Handlers

Scrolling the page gently, the start of the touch, visible on Uma, is synchronized.

Here, we can see the impact of those handlers more clearly.

The same scroll now in Timeline…

This is already at least a 2X improvement. Great stuff, but towards the end some JS comes and ruins the 60 FPS party.

Digging into these frames we have a 23ms scroll handlers and a 6ms rAF.

Are these long scroll handlers busting our frame budget repeatedly?

For simplicity I’ll remove these handlers as well:

On a hunch, I recorded the page at idle, not touching anything.

All this work comes from some 3rd party code, churning in the background:

And the recurring rAF is a Flash → HTML5 runtime, somewhere on this page.

But, lets back up, all that green paint work I saw during scrolling..

Let’s see what it’s for.

Flip on Paint Profiler to see what we were so busy with: 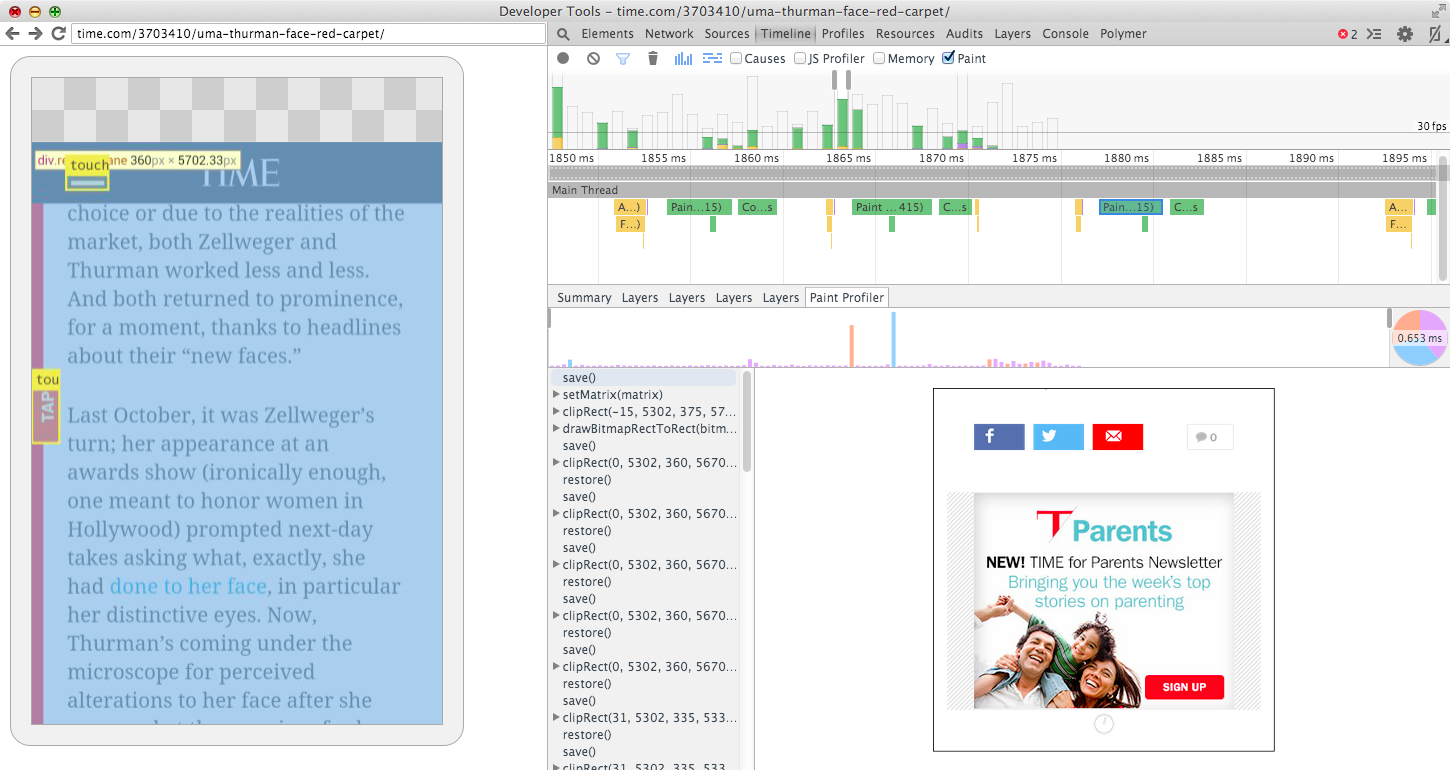 We’re repainting this one ad a few frames in a row.

It’s not terribly expensive, just 3.5ms each time, but we’re paint storming on it. Not sure why.

But in addition to these paints, we spend a lot of time Compositing.

Why so much compositing cost?

The side nav that’s not on screen has 28 layers.  Youch.

We can still do better. Let’s get to our goals.

There was one ad network firing a visibility checker every 100ms. I ripped it out and tried my scroll again:

And as a last-ditch effort, I display:none’d the two layer-heavy DOM subtrees to see if I could reduce the compositing costs.

Yup. Nice reduction in my green jank. That’ll do.

So, looking at our grand before/after…

Obviously, there’s a lot less work happening in each frame. We haven’t disabled all javascript, just removed our handlers for touch, wheel and scroll. And nuked a few very costly setIntervals.

But the important thing is we’ve finally hit our Midnight Train goal of 60 FPS, and believe me, the scrolling experience feels so so good.

The inability to scroll at the start isn’t fully an input latency concern.

The full page’s content isn’t available. Below, a 4s gap between these paints. 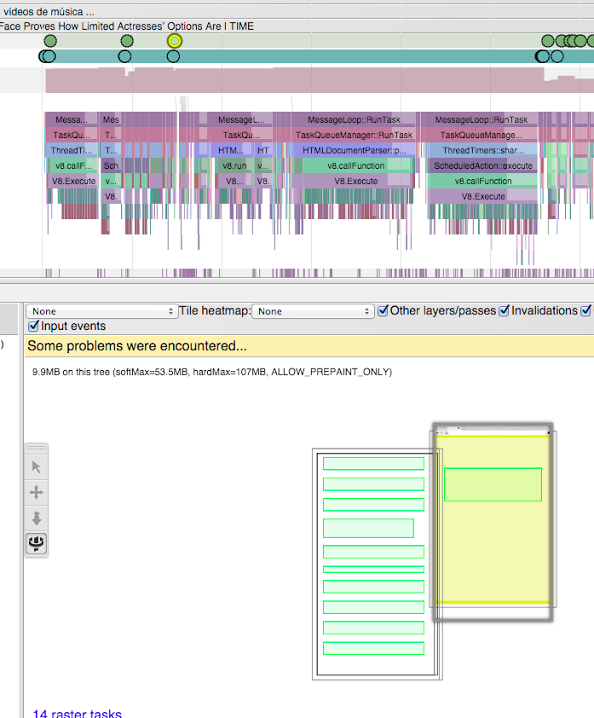 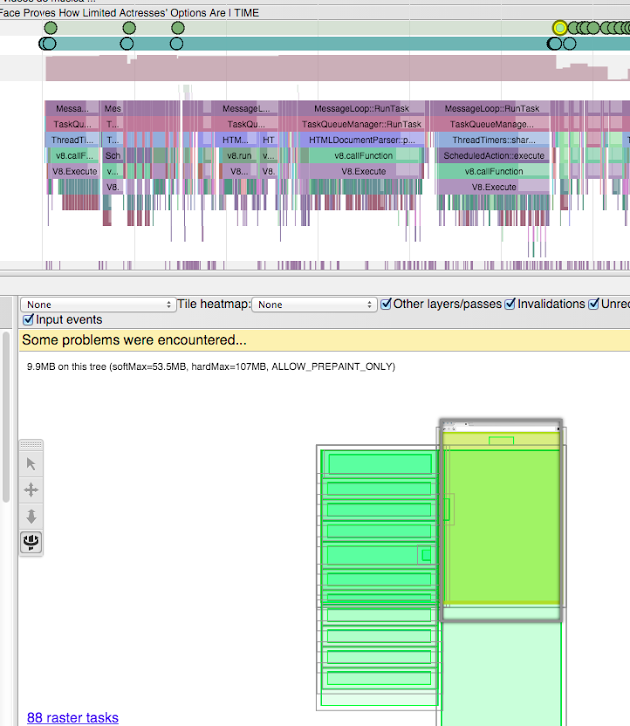 Inside these two frames is a bunch of JS taking up 4200ms: 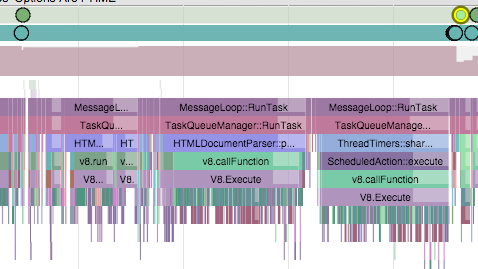 The JS ends up being Backbone doing clientside templating of ads and navigation menus. Luckily, the primary article’s content was already delivered in the HTML.

We investigated the desktop experience of the wikipedia visual editor along with their engineers. 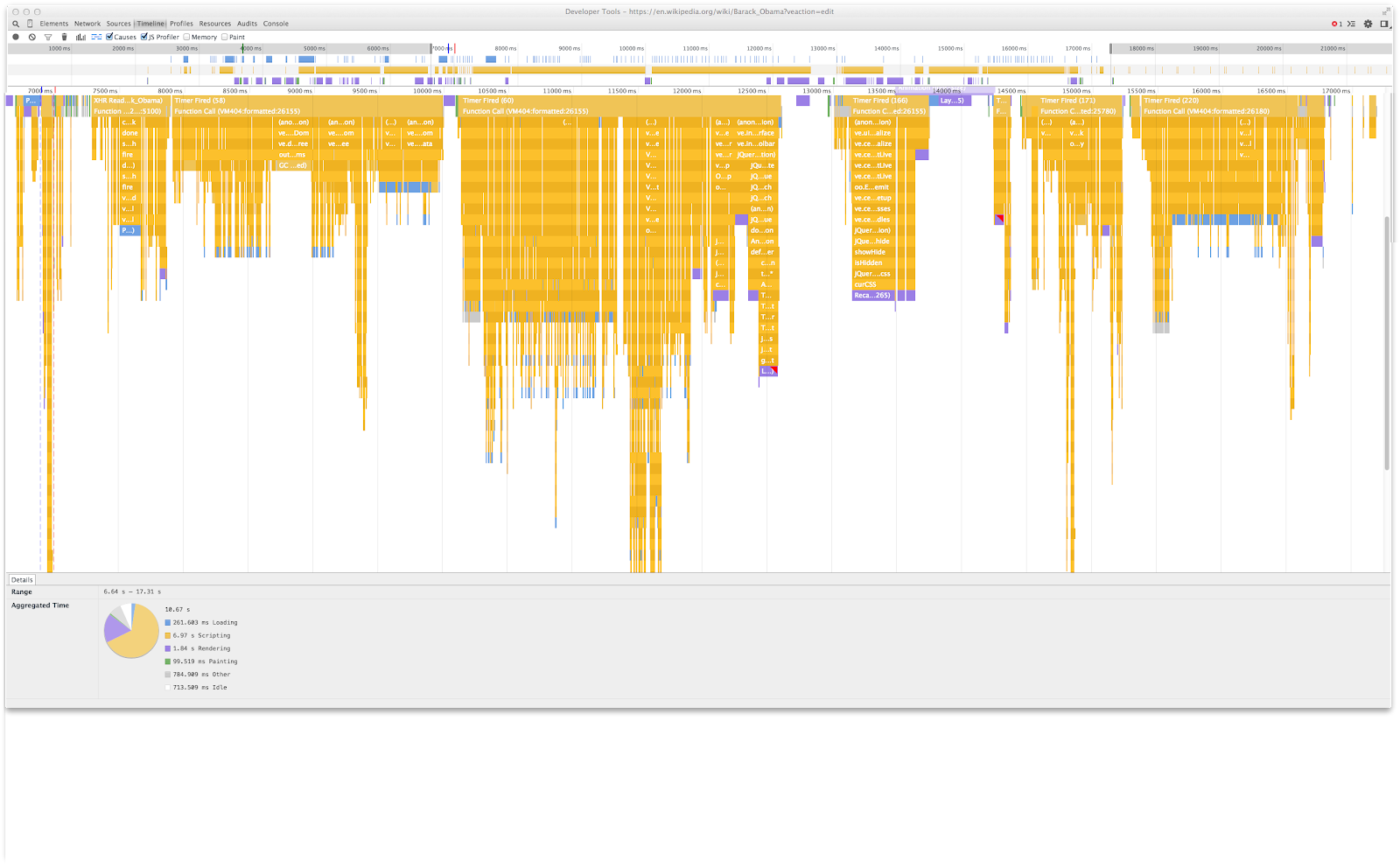 The result gives us about three equal size sections of activity. Let's look at each third as an act. 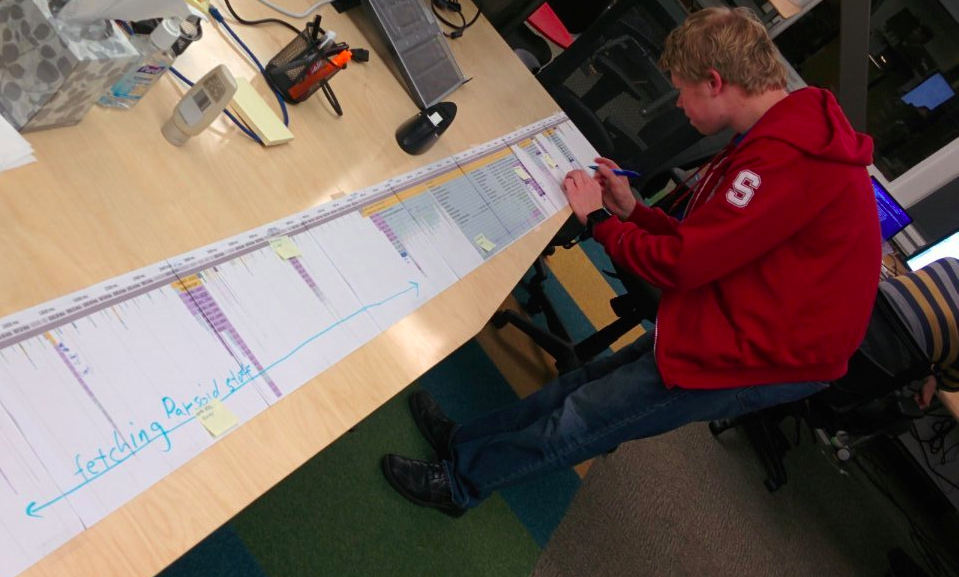 Here, Wikipedia is annotating the Timeline recording's phases of load with post-its and markers.

How does one print out the timeline? With Wikipedia, we found a creative solution: Inspect the inspector, use Device Mode in desktop mode, stretch viewport to 9000px wide, grab the Timeline's <canvas>, toDataURL() it, set to img[src], download, print.

Update (March 19), Plenty of fixes are in

https://phabricator.wikimedia.org/project/board/831/query/JnI8_pet.gGL/ is tracking the eng team’s progress. They’re already made large and substantial improvements. I’ve seen the performance speed up by over 2x already.

Working through this example reveals a lot of ways in which we could help to communicate everything above without an expert walking through the timeline.

Connecting back to source

Angular’s dominance of the runloop means the developer has few options, aside from large refactors.

SFGatePocalpyse | the pageload of sfgate.com (google only, sorry!)

Not only does it load in 80 scripts, connect to 80 origins, create 70 frames, and load 5MB of content…  but, as you can imagine, it thrashes the main thread in no particular pattern, so there's not much fruit hanging low on these sfgate trees.

Greg Simon said this destroyed his Chrome Pixel. Indeed, this particular site is a great stress-test for our entire platform.

Yelp published a blog post, Animating the Mobile Web, describing how they got to 60 FPS.

We dug in to look a bit closer. 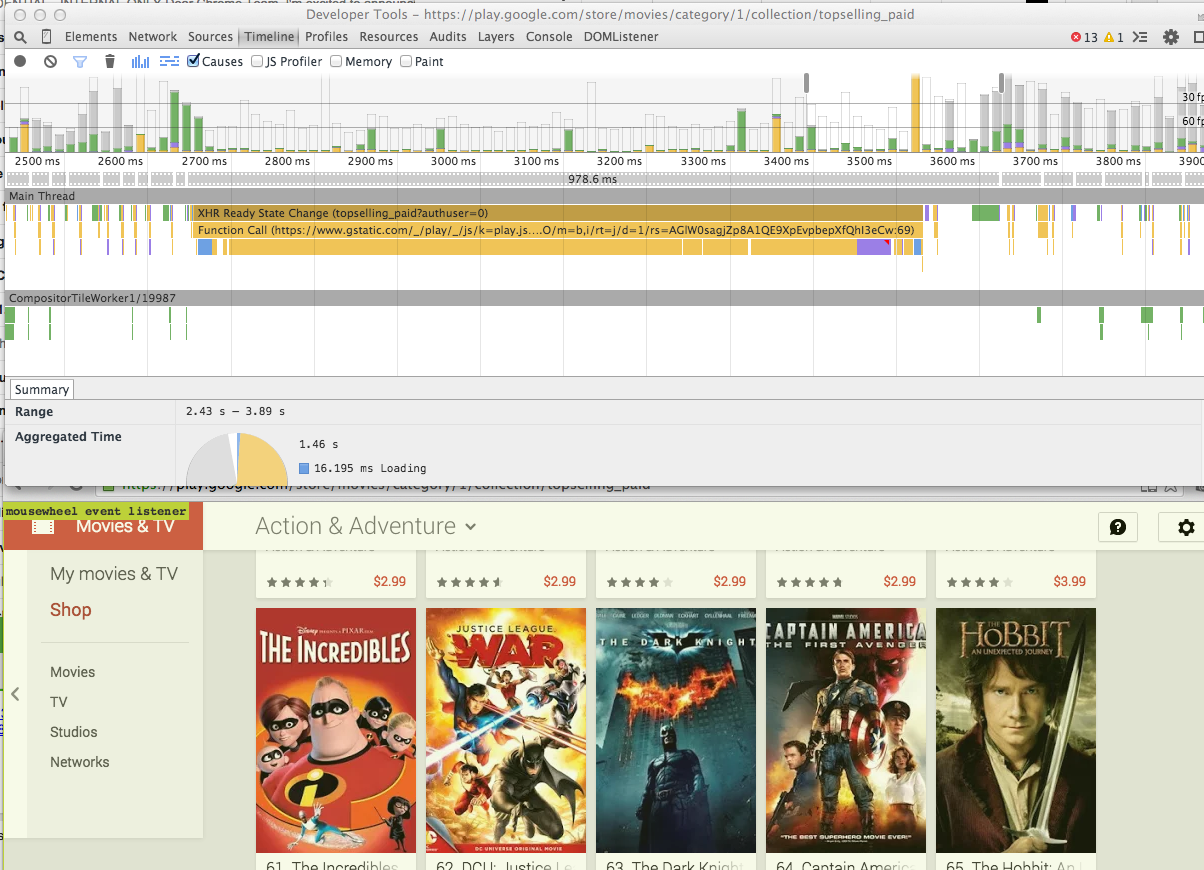 The XHR handler should definitely yield instead of creating all their DOM immediately.

But while they do their work in one go, the mousewheel handler means the user scroll is blocked.

At the end of our Timeline recording are these gray towers.

This points to work that DevTools doesn’t have instrumented.  But tracing likely does…

As a hunch, we thought this cost was ballooning with layer count.

While we’re here, that red looking layer is the one with the wheel handler. But oddly it’s showing up behind the root layer, which shouldn’t probably be possible. In fact, if we look at google.com: 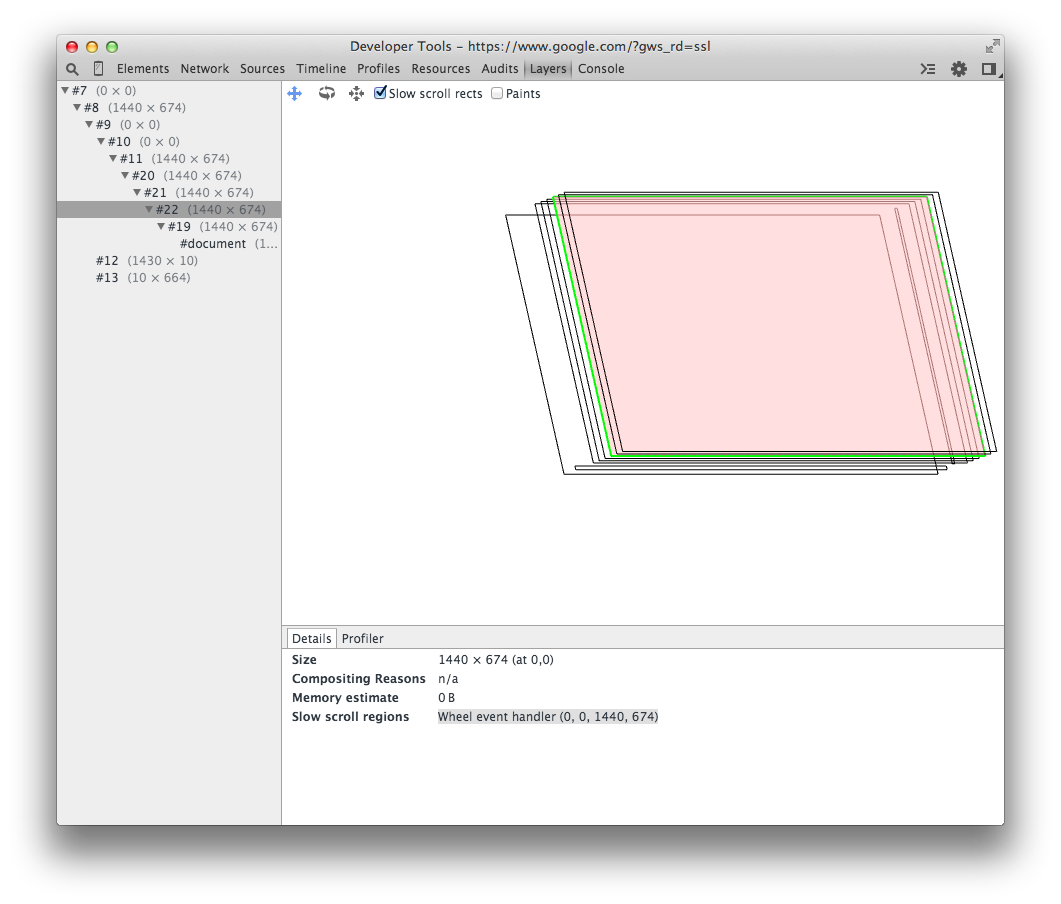 So let’s park this, because it’s just how Chrome’s internals are set up that there’s a wheel handler.

If we drop backface-visibility from the card, our layer count drops to 1.

And we’ve vanquished the timeline’s gray towers of layer management.

However, we have a new problem.

Every time we render a new card to the page we need to re-rasterize the entire viewport. 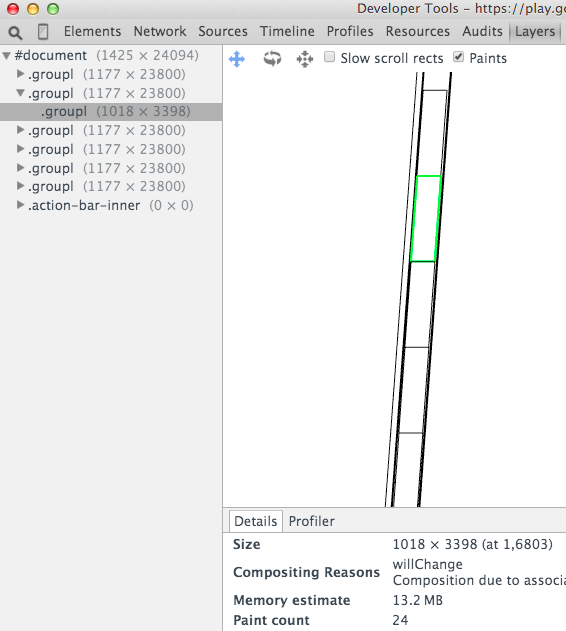 For fun, I used DevTools LiveEdit to edit the XHR handler’s JavaScript live and put a wrapper around each new “page” of elements, which I then promoted with will-change:transform.

Now our layer creation and repaint is synchronized with the DOM changes.

It ended up making a great improvement: 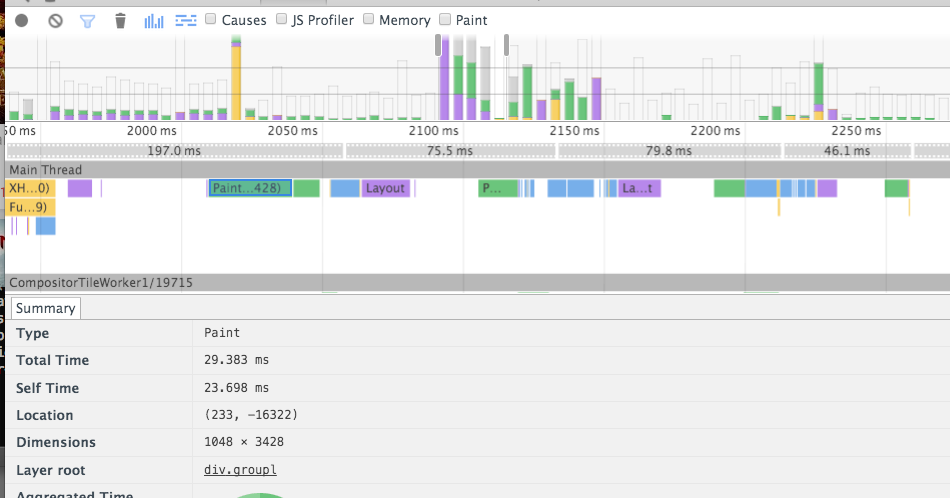 Remember that big XHR?    Upon further inspection, it interesting: 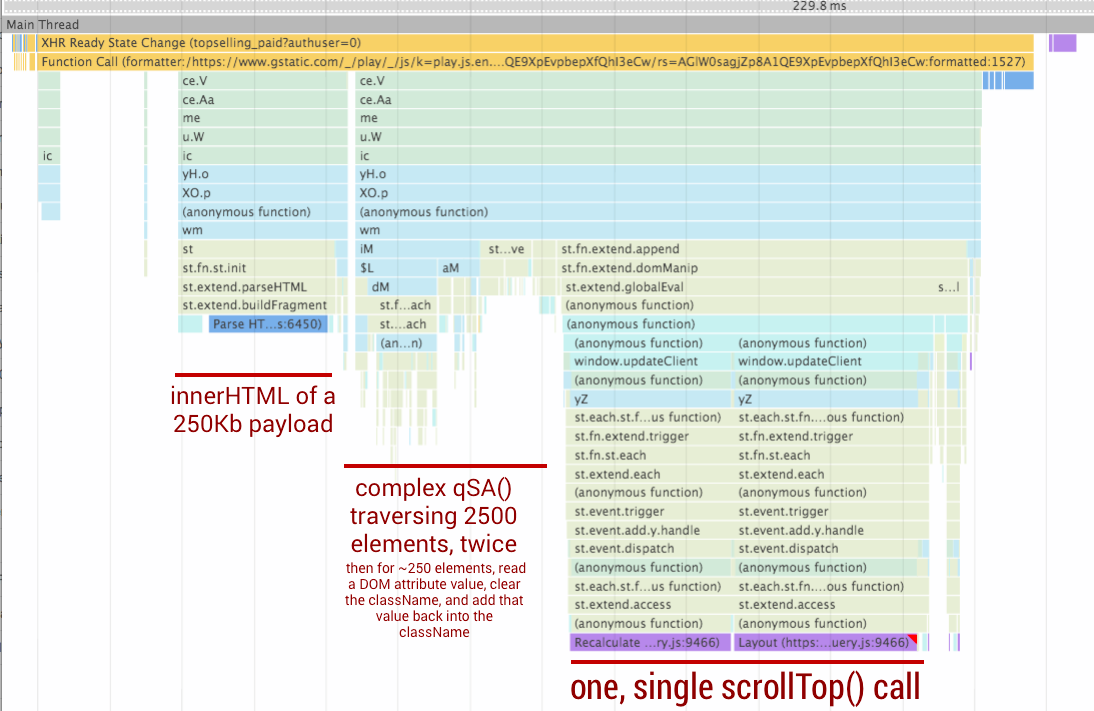