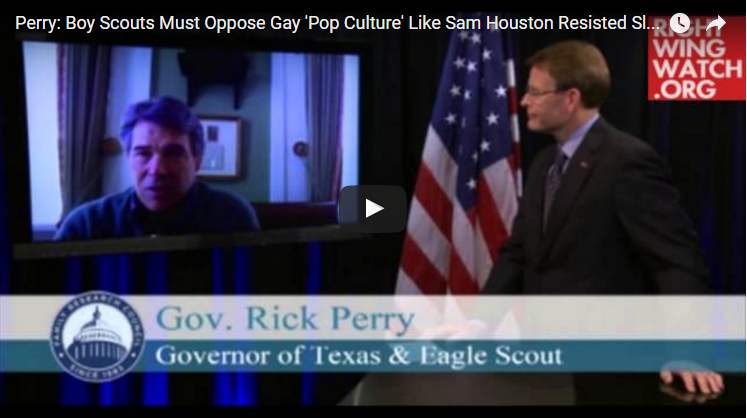 Video: Texas Gov. Rick Perry speaks from the Governor's Mansion on May 6, 2013, against proposed changes to allow gays into the Boy Scouts of America; his video appearance was part of the Family Research Council’s “Stand With Scouts Sunday” webcast.

As the Texas-headquartered Boy Scouts of America moved closer to a vote on allowing openly gay members, Texas Gov. Rick Perry revisited his opposition to such a change, while calling for leadership that hews to principles even when they are unpopular.

Speaking May 6, 2013, via video as part of the national, conservative Family Research Council’s "Stand With Scouts Sunday" webcast, Perry cited the example of Sam Houston, Texas’ first president and seventh governor, whose portrait hung behind Perry on a wall in the Governor’s Mansion.

"From this library that I speak, he made a powerful decision that cost him his governorship," Perry said. "He was against slavery, and he stood up and very passionately said, you know, ‘Texas does not need to leave the Union over this issue of slavery. We need to stay. We’ve only been’ -- he thought, a terrible decision. He was right. But it cost him his governorship."

That’s "the kind of principled leadership" we need today, said Perry, a former Eagle Scout who wrote a 2008 book defending the organization’s "American values" and saying it was the object of an anti-religious "cultural war" being waged to force the inclusion of gays, agnostics and atheists.

His comments touched off an Internet flurry of debate over whether opposing slavery could or should be equated with opposing gay admission, but we wondered about the underlying facts. Did Sam Houston, the leader of Texas’ military insurrection against Mexico, oppose slavery and say Texas shouldn’t split from the United States over it?

Houston did lose his job as governor over secession, ending a career of representing Texans in elected office almost continuously from the Texas Revolution to the start of the Civil War. The military hero of San Jacinto became the first president of the Republic of Texas in 1836; then a representative in the Republic’s legislature; president a second time; U.S. senator when Texas became a state in 1845; and, finally, governor starting in 1859.

But Texas’ secession convention removed Houston as governor March 18, 1861, after he refused to sign an oath of loyalty to the Confederate States of America. Historians have written that Houston’s views on secession had earlier cost him his seat in the U.S. Senate.

As a senator, according to the Texas State Historical Association’s Handbook of Texas, Houston angered pro-slavery factions by voting in 1848 to prohibit slavery in Oregon; supporting the delicately balanced slavery/anti-slavery decisions in theCompromise of 1850; and opposing, in 1854, the Kansas-Nebraska Act that let territories decide their own slavery status, repealing previous law that banned slavery north of latitude 36°30'.

What guided Houston’s thinking in these disputes was his belief in the "glorious Union" he had worked hard to get Texas into. The Handbook says, "As senator, Houston emerged as an ardent Unionist ... a stand that made him an increasingly controversial figure. He stridently opposed the rising sectionalism of the antebellum period and delivered eloquent speeches on the issue."

Perry spokesman Josh Havens referred us to the 2004 biography "Sam Houston," in which author James Haley described Houston the politician as treading a fine line on slavery for decades: "He disliked it," Haley wrote, but "recognized it as a fact of life to be dealt with."

Via email, Haley told us, "Gov. Perry is right that Houston was against slavery, but as a Southern senator he was chained to it and could not openly oppose it."

Haley pointed us to a key speech by Houston on slavery, delivered Feb. 22, 1855, in Boston, in which the senator said the Union should not be sundered for "political opinions," that slavery was natural to the Southern economy and that the North would still have slaves if it were profitable there. Emancipation, Houston said, would cast the freed man into jobless destitution: "You might call him free, but he would be an object of want and wretchedness."

Haley wrote, "To Sam Houston, what was paramount at that time, and in that place, and during that crisis was keeping the Union together."

Houston’s personal views on slavery are unclear. He was a slaveowner; according to his biography online at Sam Houston State University in Huntsville, an inventory of his property upon his death in 1863 listed "12 slaves valued at $10,530.20."

Yet "almost all acts other than his ownership of slaves support the idea that he disagreed with slavery as an institution," the university biography said. Among examples given: "While in office as president of the Republic of Texas and later as governor, he refused to permit payments to bounty hunters of escaped slaves. He also prohibited slave ships from trafficking in Texas."

One of Houston’s slaves recalled hearing him speak against the institution on the day Abraham Lincoln was elected president. In the 1940 memoir "My Master," Jeff Hamilton said, "I heard the General say that slavery was a damnable thing at best, and that he didn’t believe in human slavery nor in secession or disunion either. He said he hoped God might in some way perform a miracle as of old and save the country from destruction."

After Houston had helped shepherd Texas into the United States, he spoke publicly and often against ripping the Union apart over slavery. His pro-Union views and Senate votes made him anathema in Southern politics.

His Senate career, the Handbook of Texas says, "was effectively ended when, in 1855, the Texas Legislature officially condemned his position on the Kansas-Nebraska Act," which Houston opposed "because it allowed the status of slavery to be determined by popular sovereignty, a concept he saw as potentially destabilizing to the nation."

Somewhat of a lame-duck senator, Houston returned to Texas and ran unsuccessfully for governor in 1857. Opponent Hardin Runnels advocated reopening the slave trade with Africa, which Houston had called an "unholy and cruel traffic" as Texas’ president. Houston was portrayed as a traitor to the South; the press accused him of "voting against all bills in the interest of slavery," according to a July 1914 analysis in the Southwestern Historical Quarterly that summed up his defeat: "The people had not yet forgiven Houston for his support of the Kansas-Nebraska bill."

Before leaving Washington for good, Houston defended his Kansas-Nebraska vote in March 19, 1858, remarks to the Senate: "I was not the enemy of slavery, nor was I its propagandist, nor will I ever be."

Houston ran for governor again as a pro-slavery candidate, according to T.R. Fehrenbach’s 2000 "Lone Star: A History Of Texas And The Texans":

In 1859, Houston, now past his sixty-fifth year, determined to appeal to the people once again. His platform was clear: he supported slavery, he supported the Constitution, but he pledged allegiance to the Union, come what may. It was not a popular platform, but Houston could not believe that the Texans were prepared to forsake the greater nation he had done so much to build.

From the gubernatorial pulpit, Houston kept arguing against secession on practical grounds.

In a Sept. 22, 1860, speech in Austin, Houston said slavery was not threatened if Southern states stayed in the Union: "We still have the institution of slavery. All the legislation on the subject for the past twenty years has been to secure it to us, so long as we may want it."

Civil war would destroy the Southern states, he said, and there was no need for secession: "Are our rights invaded and no government ready to protect them? No! Are our institutions wrested from us and others foreign to our taste forced upon us?  No!  … if the battle is to be fought for the Constitution, let us fight it in the Union and for the sake of the Union."

The institution of slavery "is our own," Houston said, "and the North has nothing to do with it. The North does not want it, and we have nothing to do with that. … We have the right to abolish slavery -- they have the right to establish it. It is in our interest to have it. Climate, soil, association -- all make the institution peculiarly suited to us. If it were to their interest, the people of the North would have it."

In a Nov. 14, 1860, open letter to residents of Huntsville who wrote to seek his advice on secession, Houston said a revolution should not be launched without "some more weighty reason for overthrowing the Government, than rash enthusiasts have yet given."

As Texas moved toward secession, Houston told the Legislature in a Jan. 21, 1861, message that the slave states should be able to keep their rights, but "hasty" action could be disastrous for cash-strapped Texas. "The millions now spent by the United States, the support of our postal service, the defense of our commerce, must all come from the pockets of our people."

Houston’s appeals failed, but Lincoln was impressed by his courage and according to the Texas State Library’s web site "made secret contact with him through intermediaries, offering the old general command of 50,000 troops and the rank of major general if he would lead a force to restore federal control of Texas."

Houston turned down the offer in a March 29, 1861, letter; some accounts say he sat up late into the night discussing the question with friends in the mansion’s library and then dropped Lincoln’s offer into the fire.

We asked Havens for reaction to our findings, and asked whether the Lincoln offer or another event was the "powerful decision" Perry had referred to. Haley’s book mentions a "family tradition" that says Houston paced the mansion’s floors all night before refusing to sign the Confederate oath.

Havens said, "Gov. Perry was referencing Gov. Houston’s strength of character, standing up for what he believed was right in the face of public opposition. There were a collection of events that occurred over that period of time, including burning Lincoln’s letter in the mansion library, when Houston was pondering an issue that would not only shape the fate of our state, but also his personal future."

Houston did not live to see the war’s end; he left Austin to return to Huntsville, where he died of pneumonia on July 26, 1863, at age 70.

Perry said his long-ago predecessor "was against slavery, and he stood up and very passionately said, you know, ‘Texas does not need to leave the Union over this issue of slavery.’ "

But he did exhort Southerners and his fellow Texans not to secede over slavery -- an unpopular stance he stuck to in hopes of preserving the Union he revered.

We rate Perry’s statement as Half True.