Note:  This report describes work carried out in Spring 2014 for an Undergraduate Advanced Project in the MIT Department of Electrical Engineering and Computer Science.  Funding to support this work was provided by Google ATAP

App Inventor is a visual “blocks” based language for programming Android apps. It gives users the ability to easily learn, create, and prototype in a plug-and-play environment by connecting various blocks of code.

Currently, AppInventor’s toolset primarily focuses on enabling prototyping of software experiences, with many blocks created to utilize Android system services such as sending and receiving SMS messages or reading information from the web. The focus of this effort was to extend AppInventor’s toolset into the physical space, allowing users to easily interface with external sensors, actuators, and other hardware.

The MOIO board[1] is a low-cost, programmable microcontroller and can provide input/output functionality for a wide range of applications. By building out IOIO/MOIO board support for AppInventor, creating a robotics kit and accompanying tutorials, we hope to make hardware programming more accessible.

For sensors, the kit includes one light sensor, some photoresistors, and two ultrasonic sensors.  These should suffice for a variety of applications, such as light-following and wall-following.  Here is an image of the finished kit:

Here is an image of the finished kit: 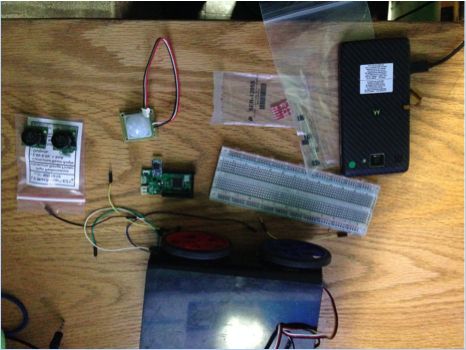 The App Inventor blocks designed for this kit are simple, easily parsable methods such as “MoveRobotForward”, “TurnRobotRight”, and “StopRobot”. These blocks also do not take in any parameters to reduce user confusion. One consequence of this approach is that the hardware must be the same for all users and follow a prescribed wiring schematic. The pre-determined, hardcoded ports are as follows:

In order to initialize all of the motors for use, the method “SetupMotors” must be called when the app starts and the screen is initialized. Here is an example of how simple the new blocks are to use:

A tutorial for using the blocks has can be found  here

Aside from App Inventor code, the following website provided code to hook up the luminosity sensor to the IOIO board. Code from this blog was directly used and modified. BrianDorey.com