Calum and the Corporate Juggernaut

Calum’s mind was awash with pride. The level of intelligence required to perform this, the greatest crime in the history of corporate espionage, was staggering. But it was not too staggering for him to grasp, for within him swam the collective intelligence of the world’s greatest thinkers. Gallileo, Einstein, Lovelace, Babbage, Darwin, that triangles guy.

He looked down at the poster tube in his hand. So innocuous. So timid and unassuming. Little did They know that the brown cardboard cylinder contained the instrument of Their inevitable destruction. Little did THEY know.

The plastic end to the tube popped off easily in his mighty grip. The sheet of thick, glossy paper within glistened under the fluorescent lights. Coiled like a snake, waiting to strike, like a panther’s tail as it readies itself for the kill, the paper sat, in silence and waited for action.

How many pins should he use? Two, maybe? Just for the top corners? No. Not this time. This was no time to skimp on office supplies. Four pins would secure this weapon of mass destruction to its vertical throne.

Calum sat back in his uncomfortable (but swivelly) office chair and admired his greatest achievement.

“I Hate Mondays”, exclaimed the poster. As loud as a poster could. The unidentified Orange and Black cartoon cat, did indeed appear to hate Mondays. He exuded this hatred from every deft stroke the undoubtedly brilliant artist had poured into his plump torso.

This was truly a great victory. Not just for him but for Calum’s colleagues. His downtrodden inmates at The Credit Control Department would soon be free from the tyranny of corrupt management and would finally be allowed to produce the high quality work they were capable of.

Calum arrived early to work on Monday to view his handy work in its perfect contextual setting. He hurried through the empty office dropping his coat and bag on the floor as he went. Almost sprinting now he turned the corner to his desk.

The poster was gone.

A letter-headed post-it not hung in its place.

A Subsidiary of Dubious Industries Ltd

The letterhead and the logo (which seemed to be a mermaid hugging a smiling clipboard) took up most of the post-it note but there was still enough room for a handwritten note at the bottom.

No personal items are to be hung on the walls.

James, Alex and the Bird

“Is it a starling or a sparrow?”, asked James Wendt, leaning back in his chair. The chair was the DubiousOffices S23 Deluxe Manager’s Chair. Upholstered in faux-leather, it boasted adjustable height, tilt and seat angle. It was a good meeting room chair but probably not something you’d want to sit on all day.

James’ notepad had only one word written on it: BIRD

“It doesn’t matter what kind of bird it is, we have to do something about it.” Alex Osbourne responded, desperation creeping into his voice. James did not understand why everyone was getting so worked up. A bird had flown into the office and everyone was behaving as if it were armed men kicking down doors.

“What if it builds a nest in the office?”, said someone from the back of the room.

The entire management team had gathered together to deal with the problem but they didn’t seem to be getting anywhere.

“What does it say in the company handbo-”, James was cut off by the sound of tiny, clawed feet scratching around in the cavity above the meeting room. The team of fourteen fully grown adults all looked around the room, trying to will a solution into existence without actually being the one to propose anything.

“We have to...”, Jane Warren stammered, her voice awash with panic, “We have to do something”

Due to some shocking negligence on the part of one or more of you colleagues we are forced to enforce a change to Employee Policy.

The change(s) are as follows:

Any employee caught or suspected of bringing a wild animal or wild animals into the offices or by action or inaction allowing a wild animal onto company property or into a vehicle owned by the company or into the home of any other employee, unless that employee has consulted with HR about their wish to have wild animals on their personal property, shall be subject to the full extent of the disciplinary procedures as stated by UK and EU employment law including but not limited to pay reduction, dismissal, suspension or legal action.

“Did  anyone really think that was going to make the blindest bit of difference?”, James said smugly.

The Management team were in the meeting room again. Pallid faces stared at each other. James was beginning to feel the pressure the bird was putting on them but was trying to stay positive. For the rest of the team, however, hope was trickling away. The bird had made it very clear that it was here to stay by beginning construction on an adorably small nest in the ceiling cavity using shredded paper, hair and air-con fluff.

“Why would it not make a difference? We’ve made it clear to everyone that they are not to bring birds into the office - “, Alex stated matter-of-factly, punctuating his sentence with downward cutting motion with his right hand.

“Nobody brought the bird into the office and it’s still here!”, James was beginning to lose his cool, “I’m sorry, Alex,” James apologised at a more reasonable volume, “but we have to get rid of this damned bird”.

We feel these changes will better improve communication and productivity in the office environment. Below is a proposed floor plan for the changes. 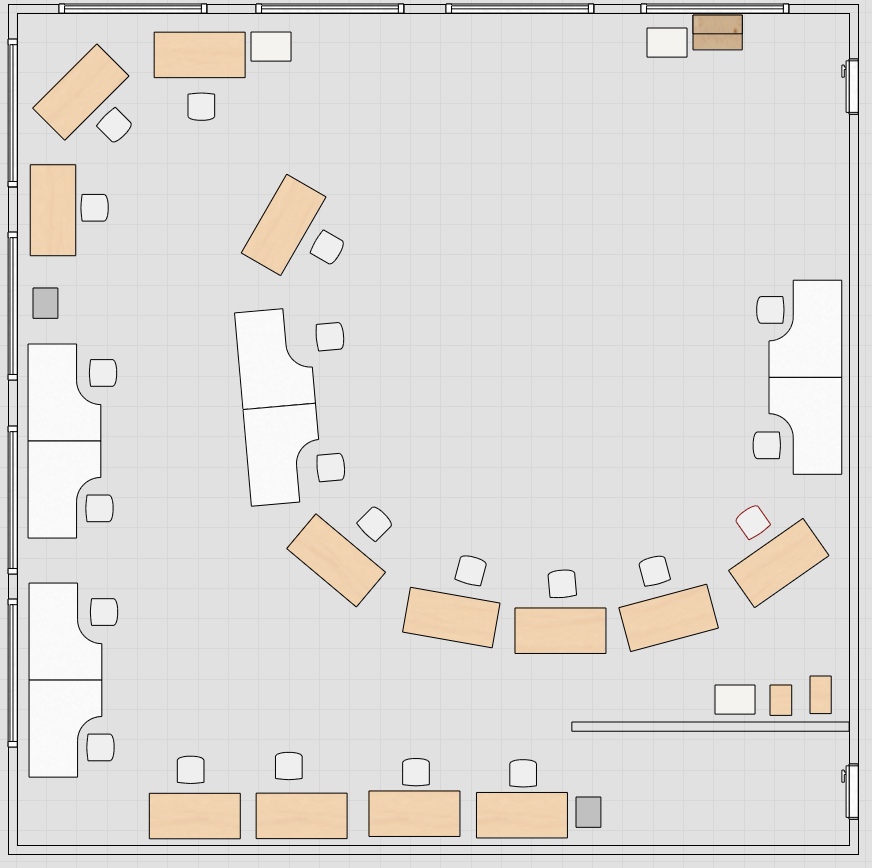 Thank you for your co-operation.

“Well… Did it work? Did facing everyone away from the bird make it go away?”

“I’m not sure I really appreciate your tone, James.”

“I can’t imagine why, Alex? I’m only stating what I stated before: Your ideas are stupid.”

“Well, I think that’s a very unprofess-”, Alex began in that contrived managerial tone of someone who has no idea what they’re doing.

“Do any of you have any ideas?”, James was addressing the rest of the room. The management team were particularly silent today but only in the way that if you came across a boulder you might consider it an especially quiet boulder.

“There is one thing we could try,” said a timid voice from the back of the room, “we did it at WorcesterTech when I worked there.”, the room murmured with disapproval at the mention of WorcesterTech. James was worried the small voice would lose confidence: “I’d like to hear your idea…?”

Alex butted in before James could speak: “Really anything you have to say might be helpful. There are no bad ideas when we’re in the brainstorm zone. Blue-sky thinking is what we need, and I think you’re the woman for the job.”, He was grinning like the Cheshire Cat.

There was a pause whilst half the room stared at Alex with utter contempt and the other half regarded him with the kind of awe that is usually reserved for great Musicians and Artists.

When James had finished glaring at Alex, he turned back to Sofia, “What is it, Sofia?”

Due to ongoing issues with staff productivity and time management we are forced to make the rather drastic decision to ban any communication (verbal, telephony, electronic, written etc) on company time or using company resources, regarding certain subjects. Specifically, the subjects in questions are, as follows:

After this one, no more company communication may mention birds or bird related subjects.

We regret this extreme measure, but in order to ensure productivity and profitability, sometimes we all have to make sacrifices. If you would like to discuss this policy please speak to your line manager.

Gemma McArthur slid the ceiling tile up and to the right so she could see into the cavity above the suspended ceiling. Alex and James stood at the bottom of the step ladder. James had helpfully placed one foot on the bottom rung to keep it steady and Alex was attempting to do the same in order to demonstrate that he was helping. Gemma could see the bird’s nest to her left. Light from the office below crept up into the otherwise dark space above the ceiling. She carefully grasped the bird around its tiny body.

Gemma climbed down the ladder weary of the her delicate cargo. She held it up to her face and looked into its terrified eyes. She looked at the two sheepish men standing in front of her, each trying to out-do the other in the not-making-eye-contact olympics. This marvellous little creature had outwitted and almost destroyed these pathetic men just by simply existing and going about its normal businessf. With her free hand Gemma clicked her fingers, with all the politeness that these two deserved, first at Alex and then at the nearest window.

The bird, a chaffinch, flew away and landed in some nearby trees. It lived for two more years and successfully reared 4 four chicks to weaning age.