In the last challenge you created a passive (fixed in place) attachment, and used it to get your robot to pick up and retrieve several objects in its path.  You used the motion of the robot to help it pick up the objects.  In today's lesson, we are going to build a motorized (claw) attachment, and use it to accomplish a task.  We will also learn how to use LEGO Mindstorms "My Blocks" to simplify our programming.

Because we need to be able to attach a motorized claw to our robot, we're going to build a whole new robot, with room underneath for a motorized attachment.  Follow the steps below to build your robot: 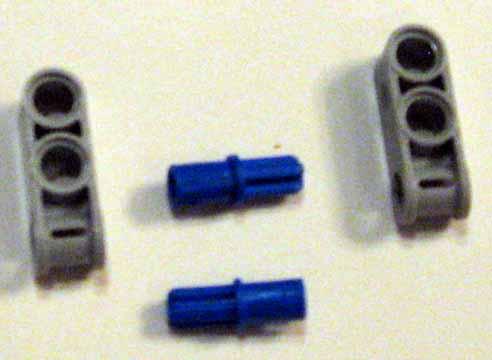 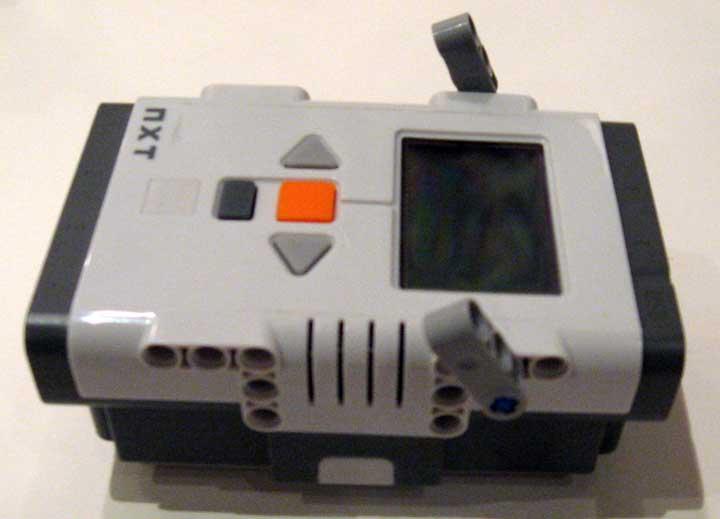 Step 2:  Build attachments to the motors, and add the tires. 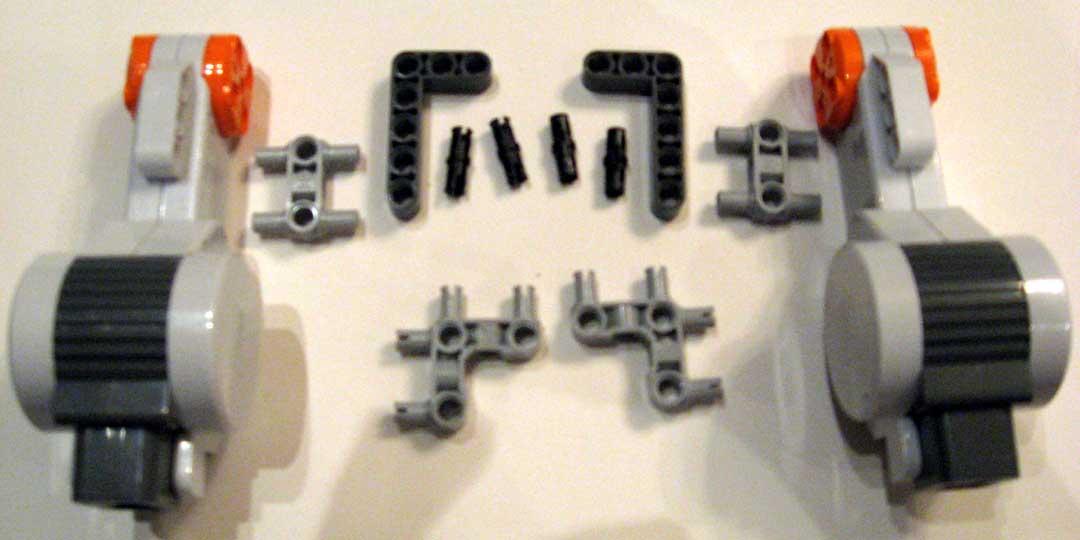 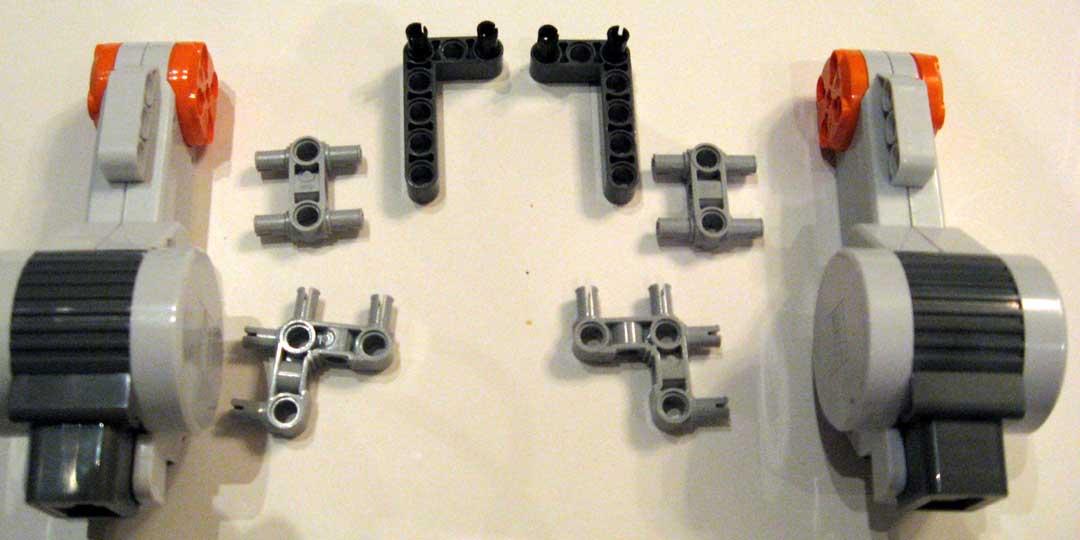 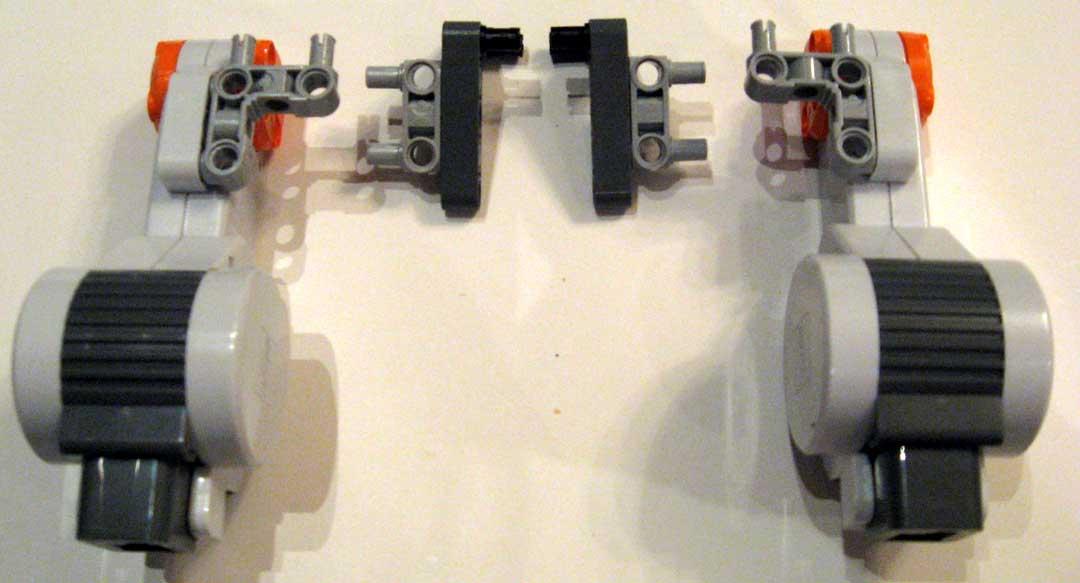 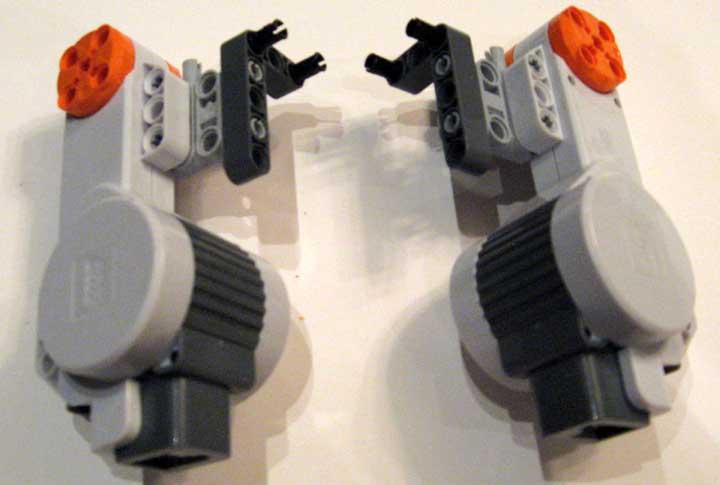 Step 3:  Build a rear crossbar to hold the motors in the right place. 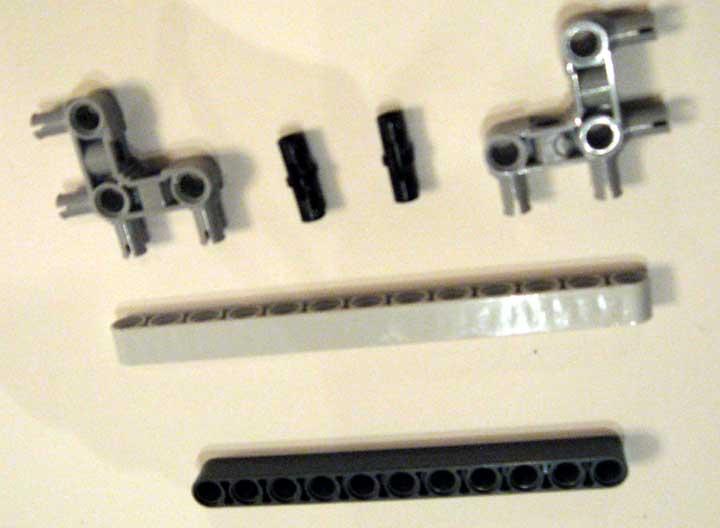 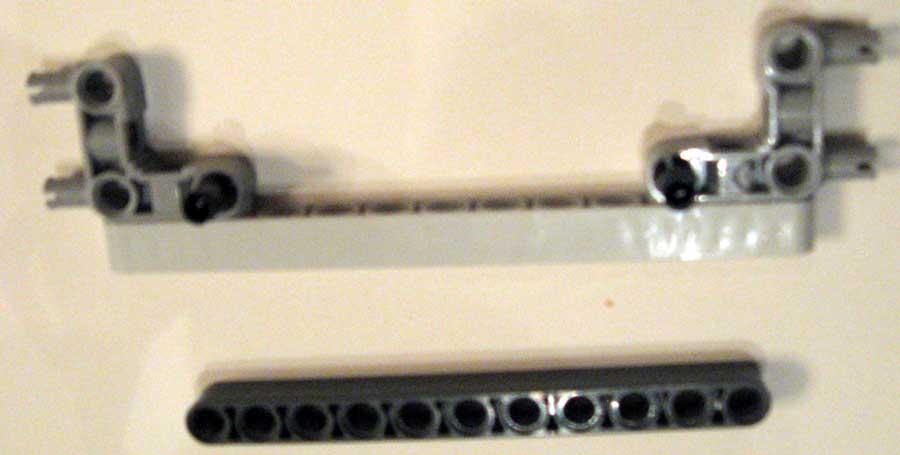 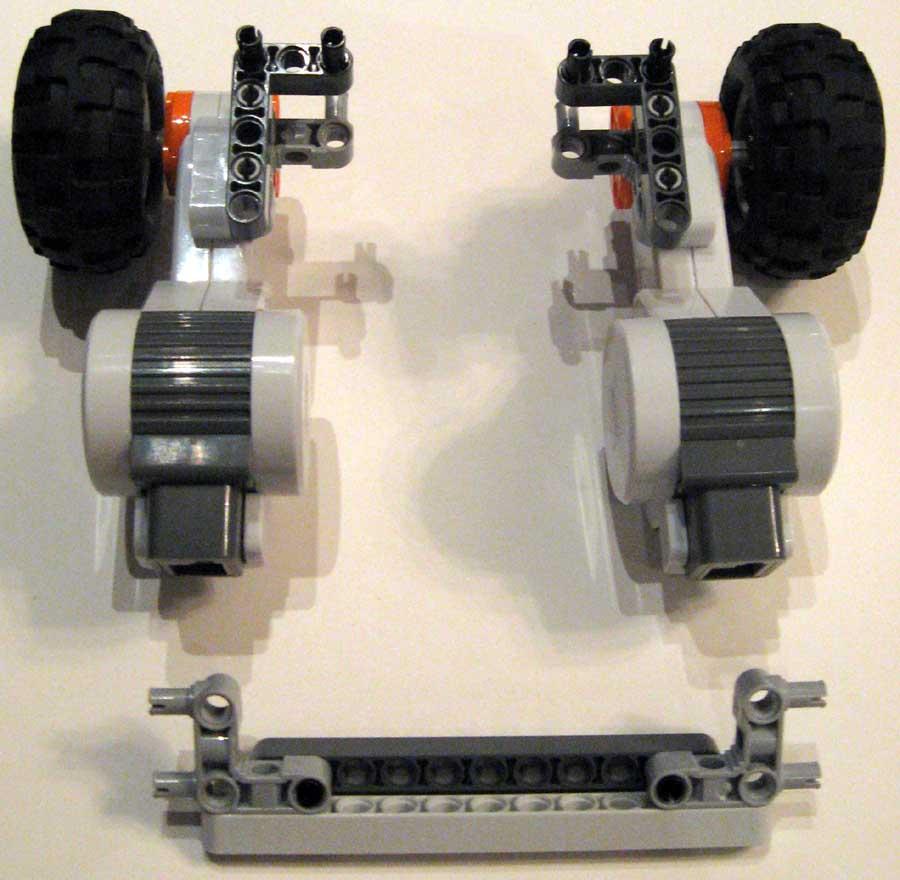 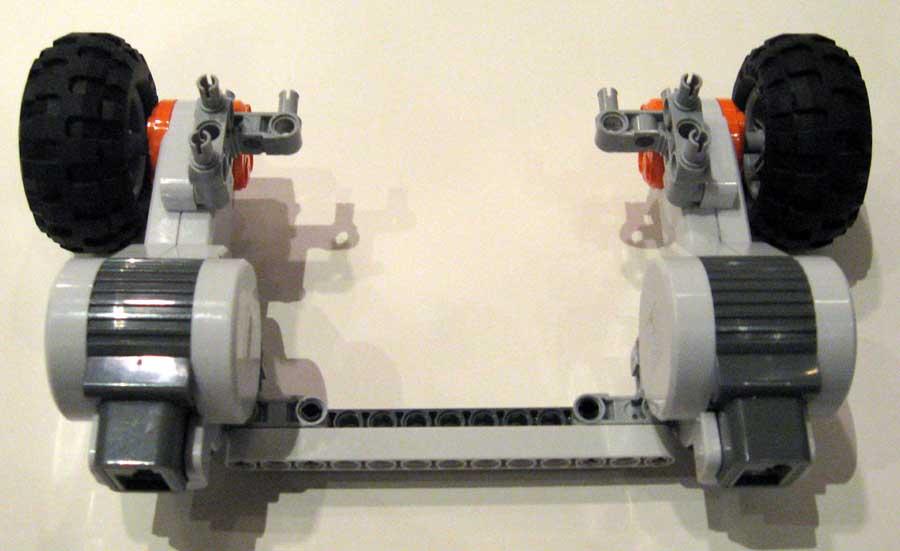 Step 5:  Attach the front crossbar to the motors. 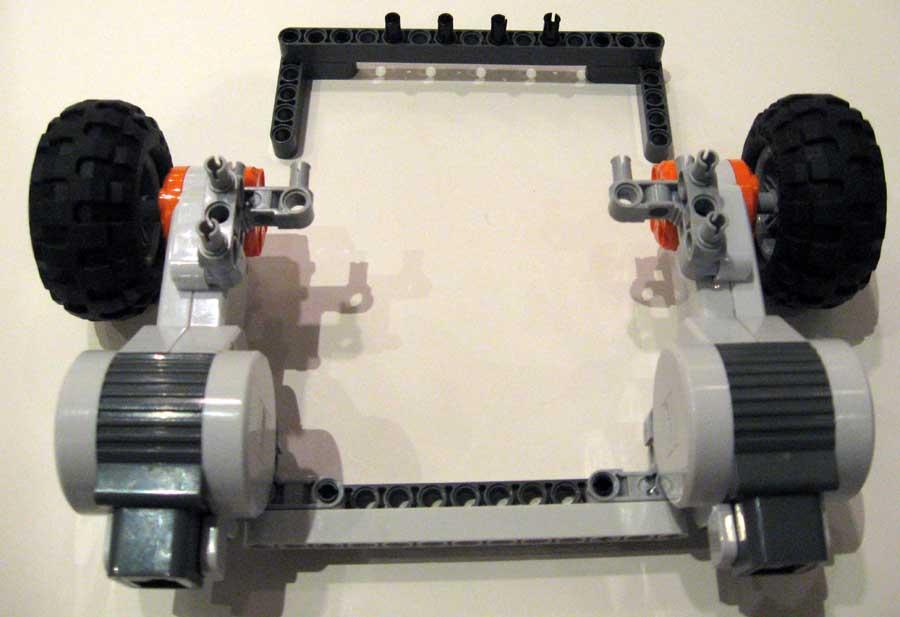 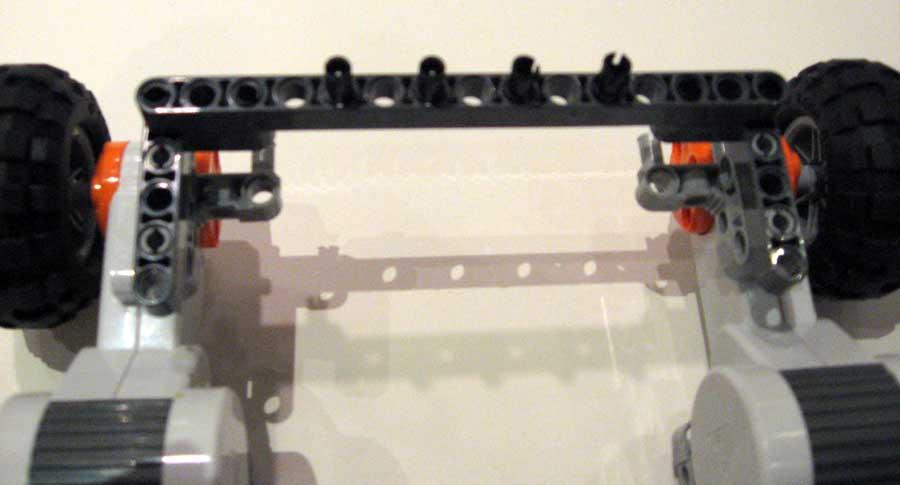 Step 6:  Build the caster wheel for the rear crossbar. 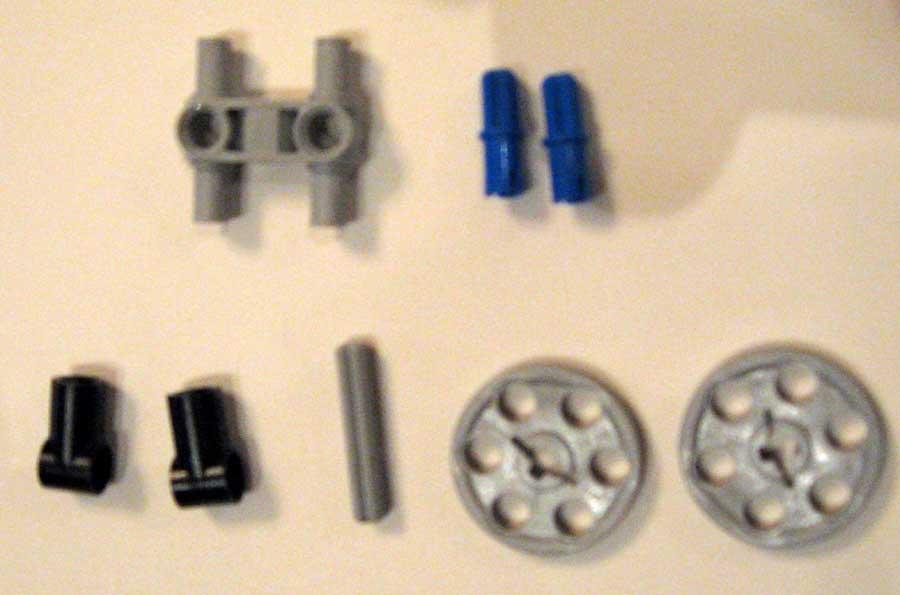 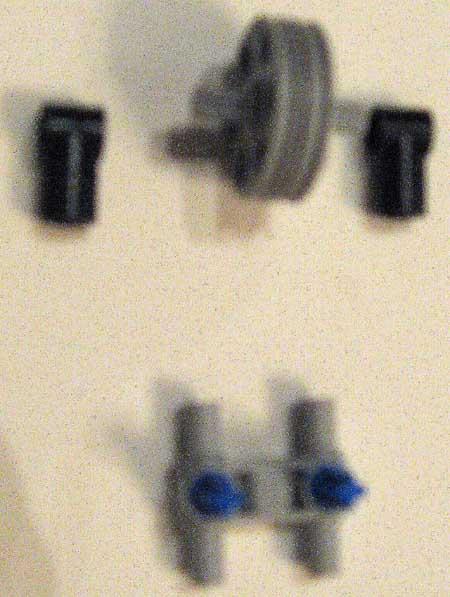 Step 7:  Attach the wheel and some vertical struts to the rear crossbar. 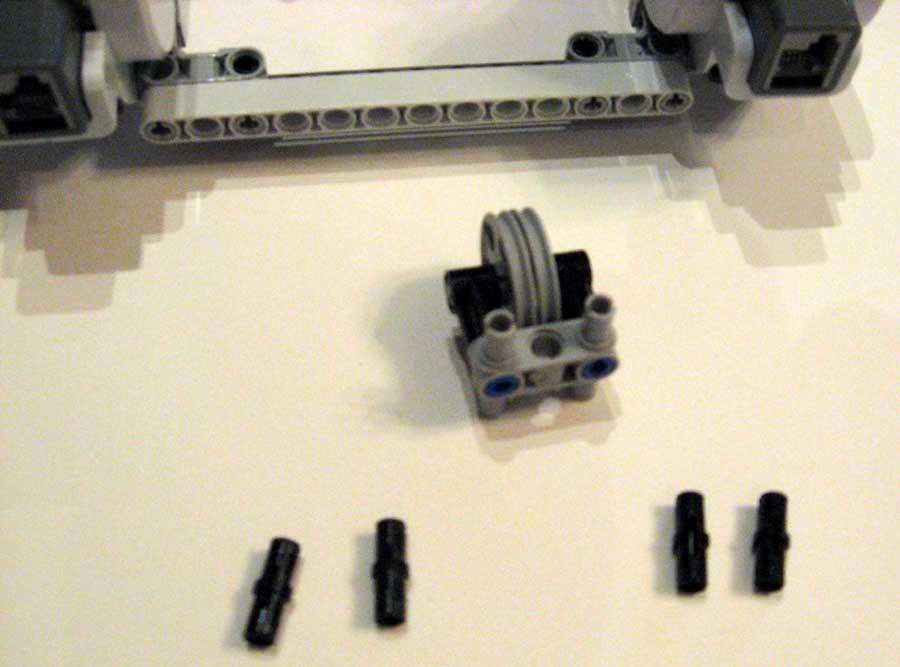 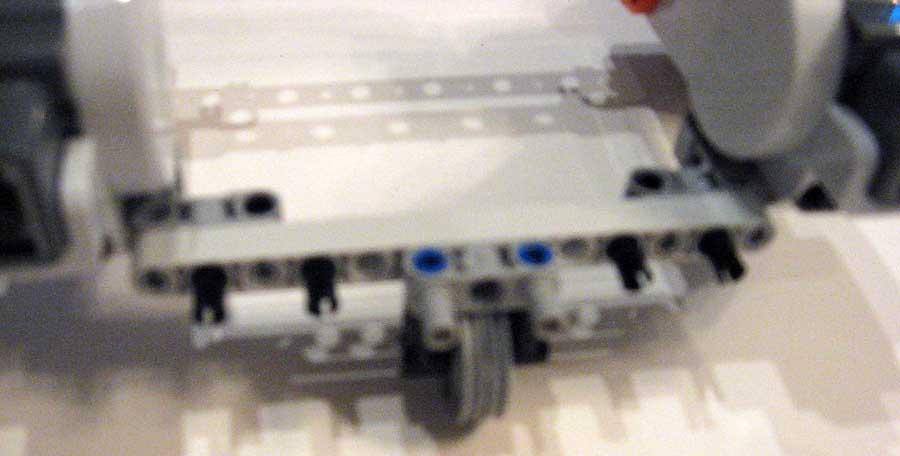 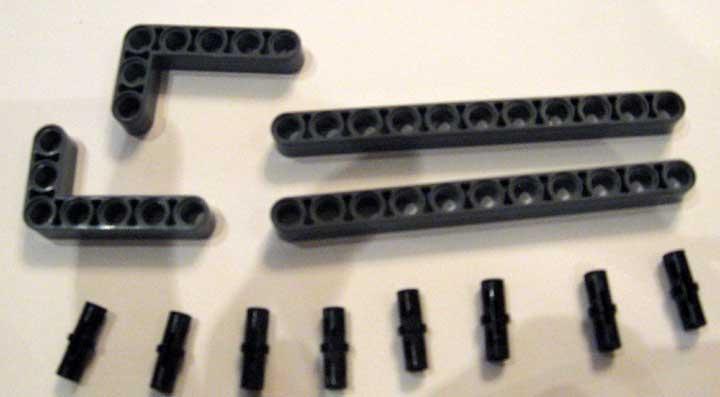 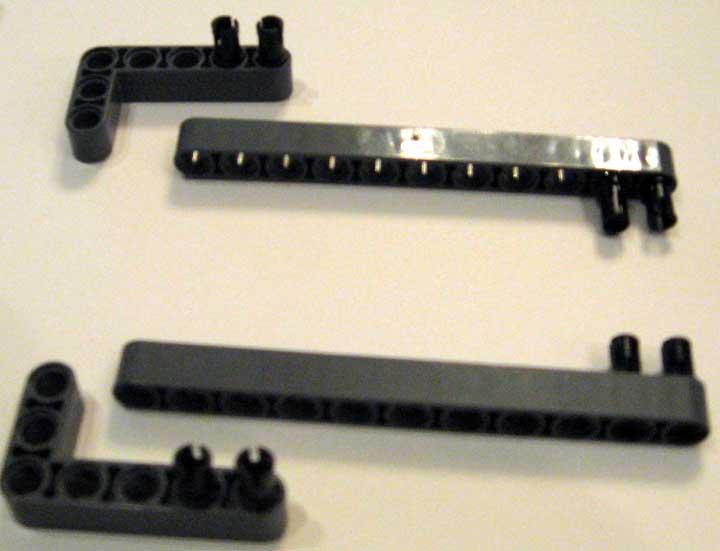 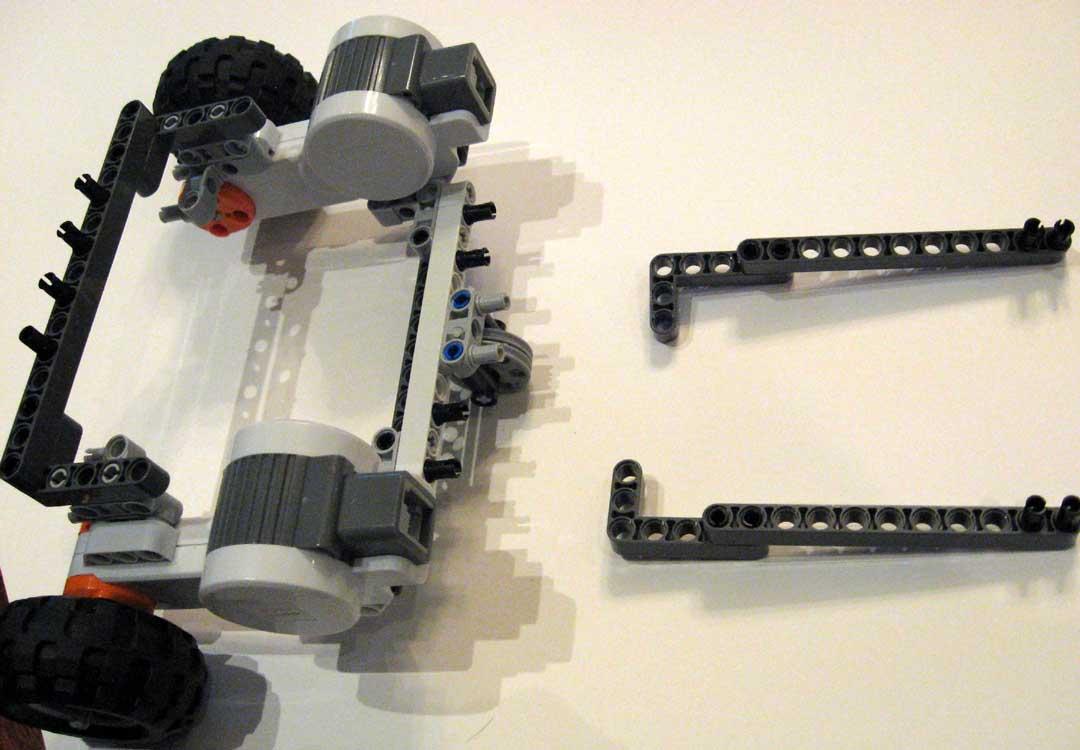 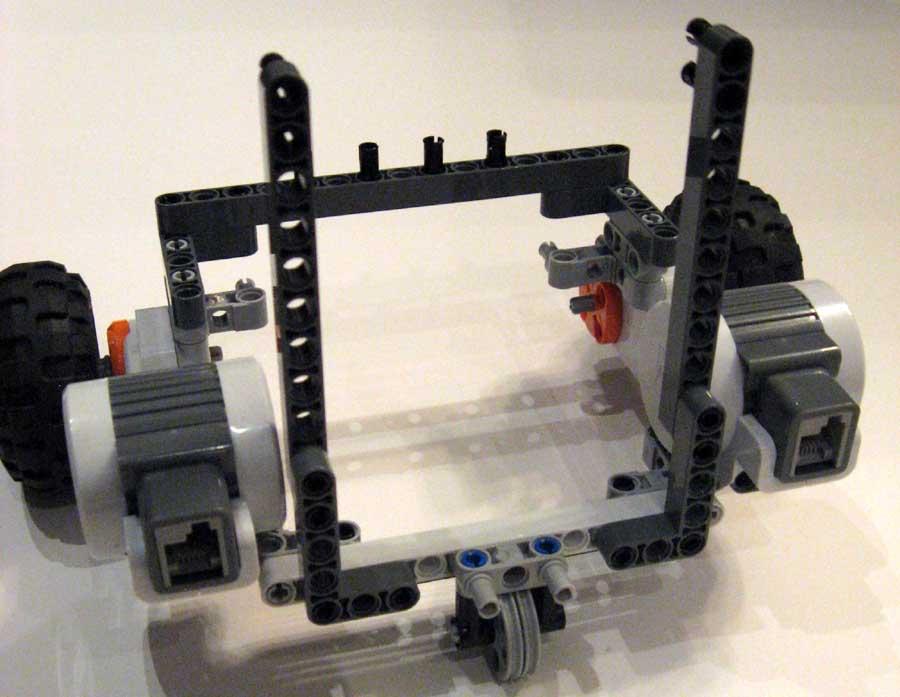 Step 8:  Attach the Mindstorm Brick to the frame. 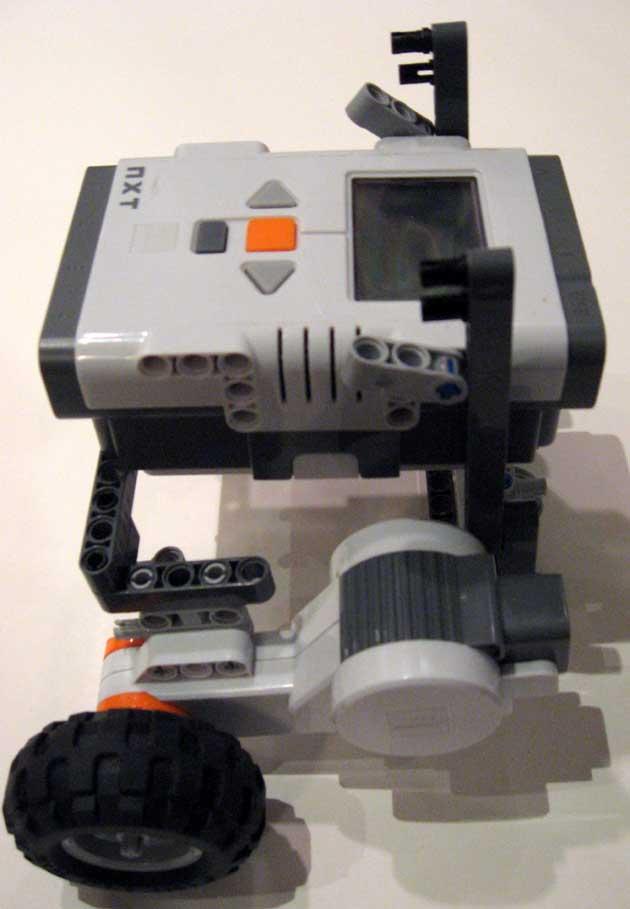 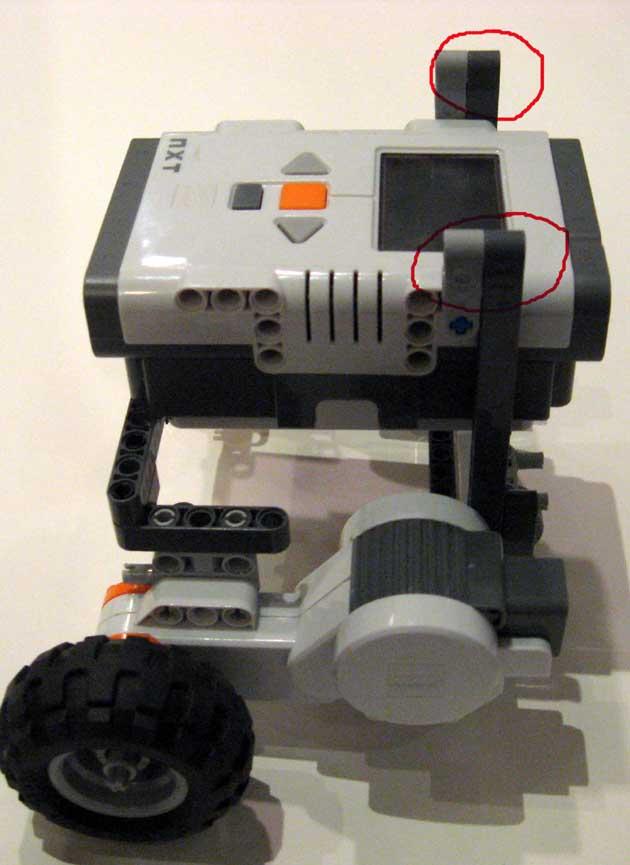 Step 9:  Build and attach the claw. 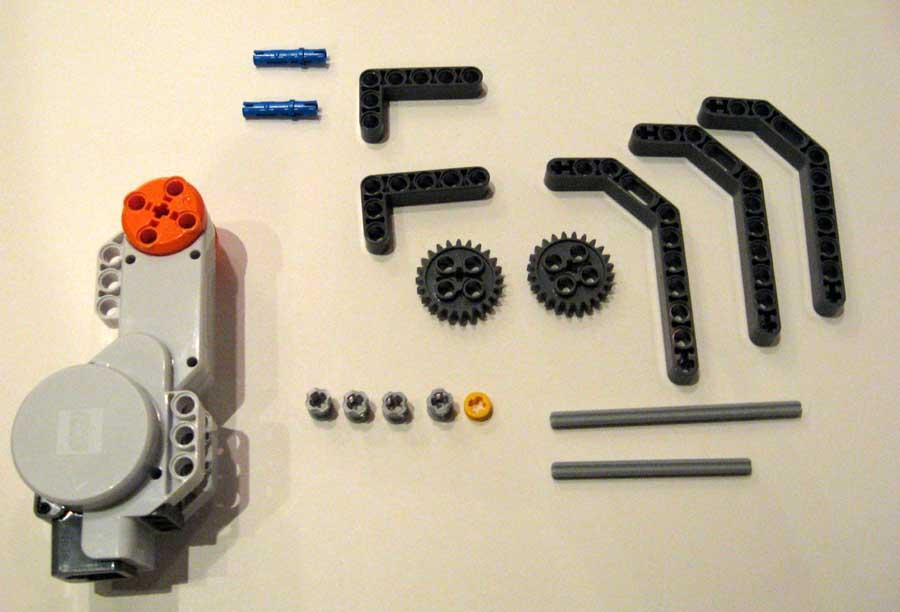 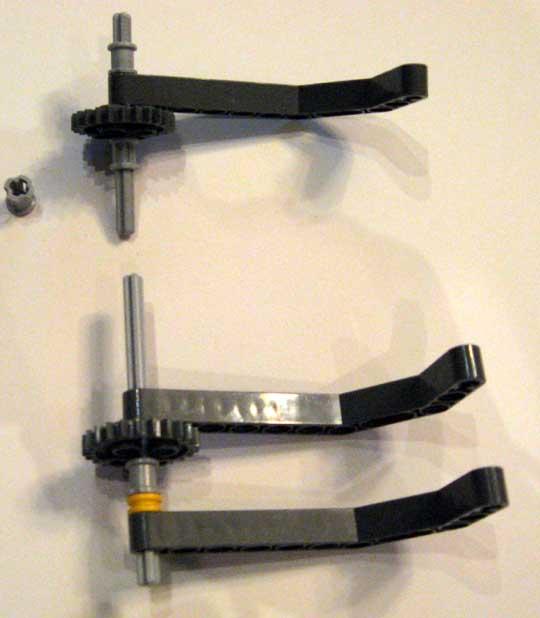 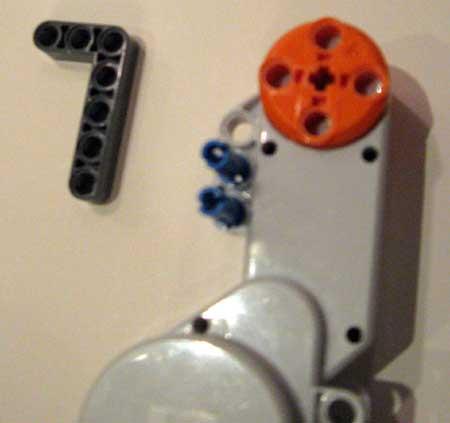 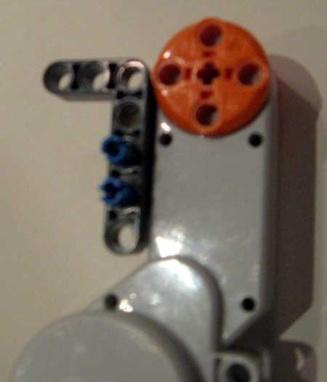 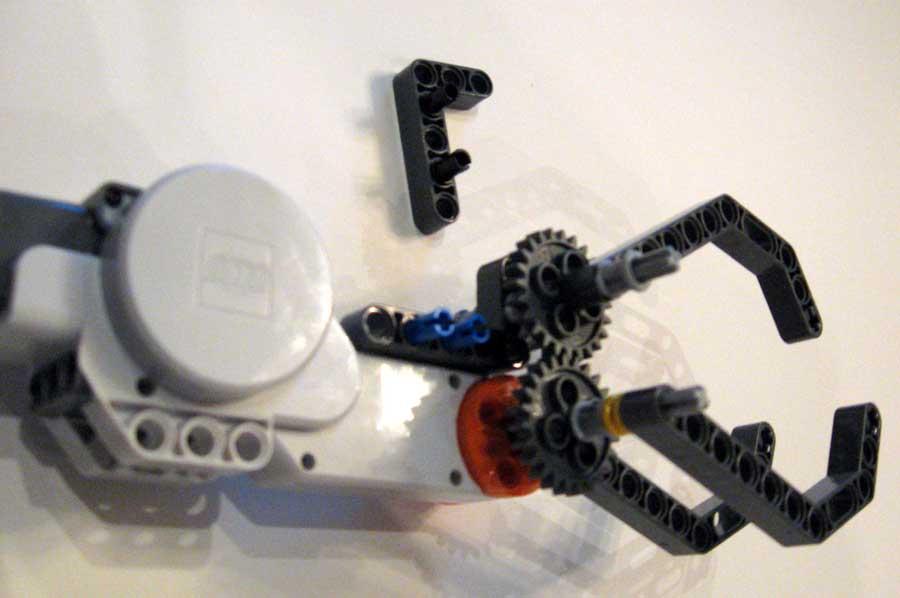 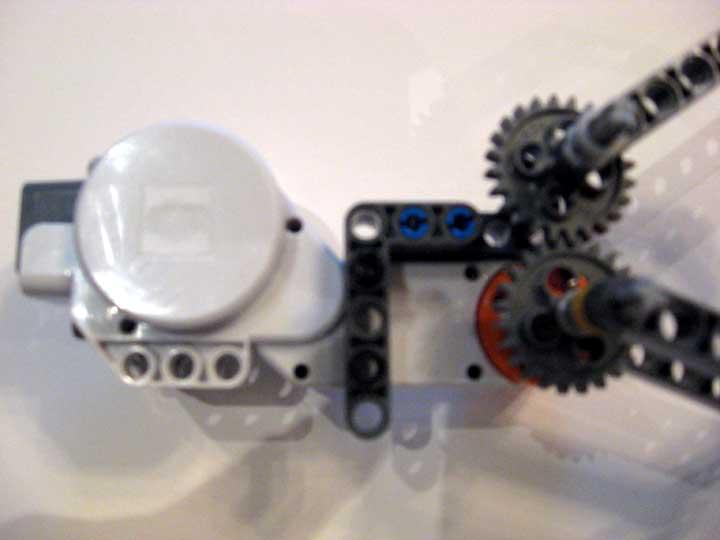 Step 10:  Attach the claw underneath the front crossbar, and attach wires to the motors.  Remember  the "B" and "C" motors drive the wheels, and the "A" motor powers the claw: 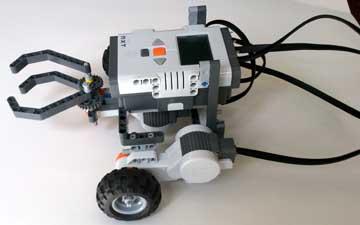 Exercise 2 - Moving the Claw:  Figure out how to get the claw to open and close.  Remember, to rotate a single motor, you'll want to use the "Move" block.  Can you figure out how to get the robot to drive to an object, grab it with the claw, and roll back to you?  Write a program called "grabobject.rbt" to accomplish this.  Your instructors will provide an object for the "Claw Bot" to grab.

Exercise 3 - Open the Claw all the Way, no Matter Where it Starts:  It can be difficult to open the claw just the right amount to grab something, so we're going write a program that will fully open the claw, no matter how opened or closed it is when it starts out, and then stop Motor "A" just when the claw is fully open.  Before we write our program, we're going to attach a bar to the motorized part of the claw, that will stop the claw from opening too wide.  Add the piece circled in the picture below to your claw: 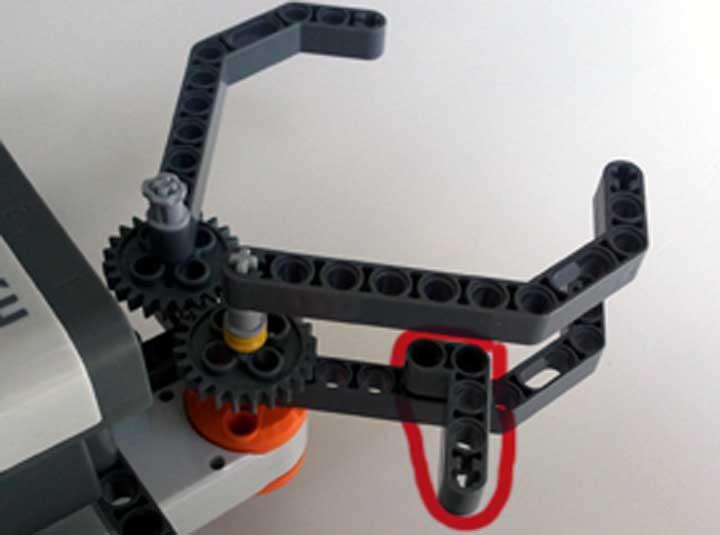 Now your new block will show up on the "Custom" Block menu that you can reach from the tabs at the bottom of the menu pane on the left side of the NXT Programming environment:

.  Create a new program (with any name), and click the rightmost tab (the two blue lines) on the menu pane.  Click the top icon