The Azizi biorepository is a research service unit at ILRI tasked with ensuring safe, secure and efficient collection and storage of biological materials and their related data. The unit aims to develop a collaborative network of partners who share their samples and the associated data, by encouraging the use of common protocols and systems hence creating a virtual, distributed resource for probing the diversity of African livestock.

The biorepository preserves a wide range of biological materials, including blood, serum, insects, DNA, RNA from a wide range of species including livestock and wildlife. Currently it has over 84,000 samples which are open source and available to the research community.

The Azizi Biorepository system comprises of 7 LABS-80K freezers, 2 liquid nitrogen (LN2) generators refrigerators and a 3000 litre bulk holding tank and an external fill point for drawing LN2 for field and lab use.

Each freezer has a capacity of 75,400 2ml cryo vials creating an installed capacity of 527,800 biological samples. Recently the biorepository floor space was expanded from a holding capacity of 6 to 18 LN2 freezers which increased its capacity from 452,400 samples to approximately 1.4 million samples when full. Currently the 7 installed tanks are 78% utilized holding 414,700 samples with a rich set of metadata for all the samples.

The LN2 generators make LN2 at the rate of 21L per hour or around 500L per day when running concurrently. This is enough to sustain the operations of the biorepository and also supply the laboratory users for LN2 to be used in the field and in the labs.

The samples are held entirely in vapor phase liquid nitrogen (LN2) in the freezers at an average temperature of -190 degrees celcius. This reduces the chances of cross contamination between samples to zero since at those temperatures there is no activity in the samples.

The freezers are automatically filled whenever the level of any freezer falls below the set threshold by triggering a refill request from the bulk tank consequently starting a daisy chain of requests where all the tanks are filled automatically. This is done to ensure efficient use of the LN2 making the system efficient and highly reliable.

The Azizi biorepository currently has over 450,000 samples from different projects of which ~84,000 are open access and can be accessed from Azizi landing page, http://azizi.ilri.org . A further interrogation of the samples is found http://azizi.ilri.org/repository/mod_ajax.php?page=samples_vis

The biorepository has an active portal, http://azizi.ilri.org/repository which hosts various modules. 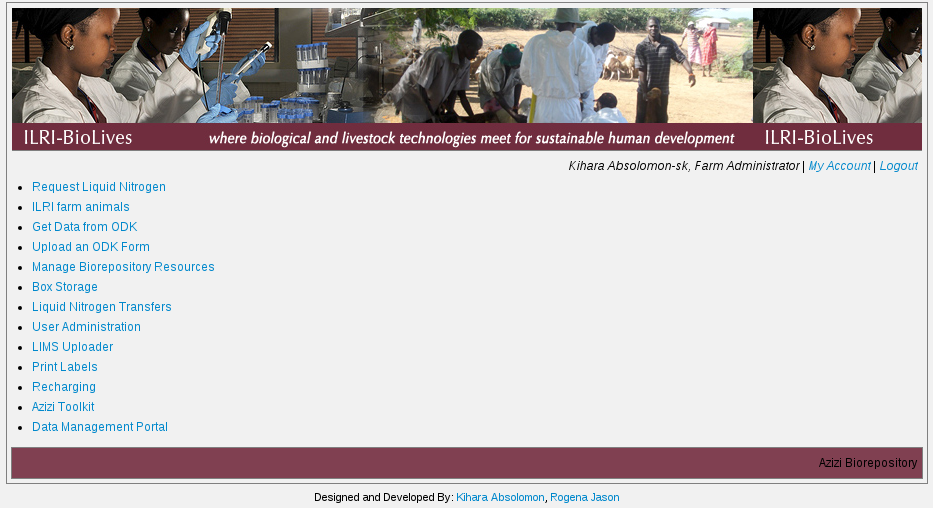 The portal is used to offer various services to users. Key among these modules are:

The data management portal is used to manage data being collected by various projects. This data is collated held here is still raw and the various researchers are usually working on it. When the data is ready to be released, it is submitted to ILRI’s data portal, http://data.ilri.org/ . The DMP currently holds data belonging to Tanzania Dairy Genetics (AgriTT) http://tdg.ilri.org/ , Urban Zoo Project (UZP) http://www.zoonotic-diseases.org/project/urban-zoo-project/ , African Chicken Genetics Gains Project (ACGG), http://africacgg.net/ among others.

The ODK tools are used to manage ODK forms which are used for data collection. The tools allows users to upload their forms to the aggregate server http://azizi.ilri.org/aggregate/ and also download the data which has been collected.

The Azizi portal hosts the farm management system which is used for day to day reporting of activities that goes on in the farm. The system is used by a host of users including the farm staff, the health and safety team among others.

The Biorepository provides support to various projects in proper sample and data collection, proper labeling of samples from the field, long-term storage of materials and retrieving of samples among other duties. The unit has developed a range of robust field sample and data collection tools and procedures which are currently being used in the field by the various projects. It has developed appropriate sample processing systems which are used to ensure proper traceability of samples from the field to the biorepository as well as ensuring that the appropriate data is captured for each and every sample that is collected. Some of the systems developed include tarakibu https://github.com/ilri/tarakibu/ , ukasimu https://github.com/ilri/ukasimu , a robust management system for the Open Data Kit (ODK) suite of tools http://azizi.ilri.org/repository/odk/  and a robust management system for the biorepository http://azizi.ilri.org/repository/ . In addition the unit has developed a robust mobile based data collection system called Ng’ombe Planner which uses feature based phones as a tool for data collection.

Azizi is in collaboration and partnership with various projects and institutions. Some of them are:

The Biorepository is providing high quality trypanosomes to the university, through a collaboration between ILRI and the center for biotechnology and bioinformatics, led by Dr. Ben Kulohoma. Under this collaboration the Biorepository will provide 46 trypanosome isolates for the university to conduct multi drug resistance on them. The biorepository will receive sequences from genes which are associated with multi drug resistance.

The Biorepository is involved in this project as a member of 5 work packages and as a testing site for the eB3Kit that will be developed. In addition, the Biorepository will provide the data collection systems that it has developed so far and that are being used by the different projects in ILRI.

Under this collaboration, the Biorepository is providing EADD II a mobile based data collection tool for its longitudinal monitoring activities. It has provided and ODK platform for data collection as well as the Ngo’mbe Planner tool for production monitoring.