A Corner of Canaan: 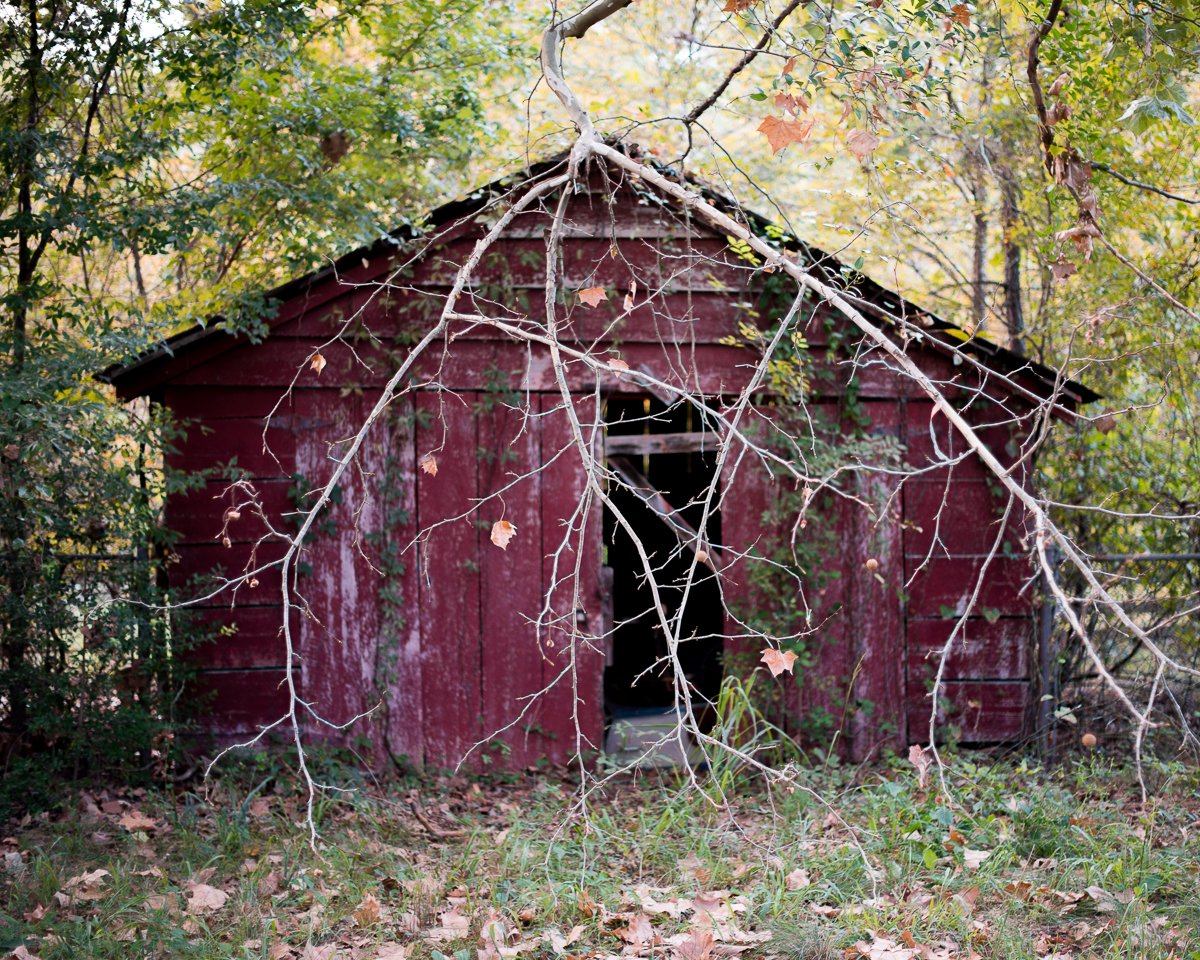 Historic homes are beautiful, the craftsmanship is exquisite, hand craft. They also function as primary sources and historical evidence. These images account for the remarkable change in our environment, and in some cases persistence of tradition. In either instance they remind us that a particular future cannot be guaranteed. In essence, these images attest to the people who lived in and built these homes. The historical records relevant to the research of historic homes include: plat maps, deed records, tax rolls, and census records. The census, especially, can offer clues as to whose hands may have built these structures. The census is a gateway to the lives of the people who lived at historic sites, especially antebellum sites, because it is the most democratic record available, listing all members of a society regardless of race, age, or gender. The structures in this body of work were all built before the Civil War, a testament to Texas’ rich, but unresolved history. Each structure bears marks of careful design considerations and sophisticated joinery, executed with astounding skill, usually with a broad axe or a draw knife. Eccentric decorative elements allude to the design sensibilities of each builder. The issues raised by looking at these sites over time has contemporary relevance as we continue the conversation of place and the effects of time.

Ben Davis’ work investigates the social experience of architecture by documenting the historic structures that have accommodated cultural rituals for over 150 years in Texas. Davis uses traditional photographic methods as well as contemporary digital technology. His work is included in the Wittliff Collections at Texas State University. He was the recipient of the Priddy Scholarship at the University of North Texas in 2012, and the CVAD Student Project Award Fund in 2013. Davis’ work has been exhibited in venues across the United States including: Photo Center NW (WA), The Center for Fine Art Photography (CO), and in numerous solo shows in Texas. Davis is currently working in conjunction with the Gregg County Historical Association to document antebellum homes in East Texas for a book publication.

Davis was born in Houston Texas in 1981. In 2007 he moved to Kerrville Texas to attend Schreiner University where he received a B.A. in Creative Arts. Davis currently lives in Denton Texas where he completed his MFA in Photography and is currently working toward an MS-LS (library science) in Archival Studies & Imaging Technology. Davis makes frequent excursions to East Texas to document the region’s remaining vernacular buildings and to maintain relationships with friends and family in the region.

In the title, “Culture,” implies people, this is ultimately a project about the lives of the people who lived at these sites, essentially this is a study about the social experience of architecture. “Canaan” is a reference to the promise land to which the Israelites were delivered, the South is clearly no land of promise with its legacy of slavery, and “Corner” is a reference to the particularity of the place I chose to photograph, San Augustine Texas. The phrase is a quote from William Faulkner’s “The Bear.” I think the phrase captures poignantly the basic ironies of romance and inequality in Southern culture.

A Corner of Canaan, is a series of photographs that focuses on preservation of antebellum, pre-Civil War buildings in East Texas. Pre civil war culture in Texas consisted of socially stratified spatial arrangements that were meant to remind people of their place in society. Why these buildings should be saved is a question that can only be considered by comparing two diverse views, and histories, one anglo and one African American. These photographs offer a comparison between two points in time, and two points of view. By writing census data from the year 1860 on two panels on either side of a photograph depicting a plantation home, time has been frozen at the height of antebellum society in Texas, the very next year the Civil War began and the Southern economy was destroyed. The work is meant to reference the ledgers and records kept for generations in the courthouse archives and as family heirlooms, these are the very documents that record and too narrowly define land and people. Text and photographs are mounted to large sheets of hot-press watercolor paper showing the unfinished deckled edge and floated in the frame. Ten of these panels combined with individual detail images comprise the entire exhibit, with each separate panel devoted to one historic site. That the photographs are meant to be formally beautiful is a deliberate irony, because anyone who has lived in one of these places knows that they are not the grand mansions Southern lore would have us believe they were.

My interest in researching family histories in relation to historic homes culminated from spending time in the warm embrace of friends in two African American congregations, one in Kerrville Texas and one in Jasper Texas, my parents hometown. Family names in these churches transcend cultural barriers and are connected to members of the Anglo community and to historic sites. My own family history in Jasper has been well documented, but many of the people in these churches can not trace their heritage because material artifacts are thin to the point of invisibility, leaving their ancestors nameless. One story connected to Mimosa Hall Plantation, North of Jasper, caught my attention when two Greyhound buses from an African American historical society came to visit the private residence of then owner Philip Hirsch. All members of the society had traced their lineage back to one slave girl on the plantation. Realizing the potential for a larger project dedicated to exploring questions of diversity in preservation, I began documenting these antebellum buildings in early East Texan communities. Some 36 antebellum historic sites have been identified in Jasper and San Augustine counties. The University of North Texas has supported this project through grant money from the Priddy Scholarship and the Portal to Texas History Fellowship.

This exhibition is comprised of 25 pieces that measure 41” x 27” each, and accompanied by 24” x 28” pieces for a total of 50 pieces. The exhibition requires 300 linear feet of horizontal wall space, no shorter than 8 feet in height. Daylight balanced light bulbs are required to display this body of work.

Each piece is mounted using a D-rings on the back of the frame. Two fifty pound hooks are required for each piece. I will absorb the shipping cost. 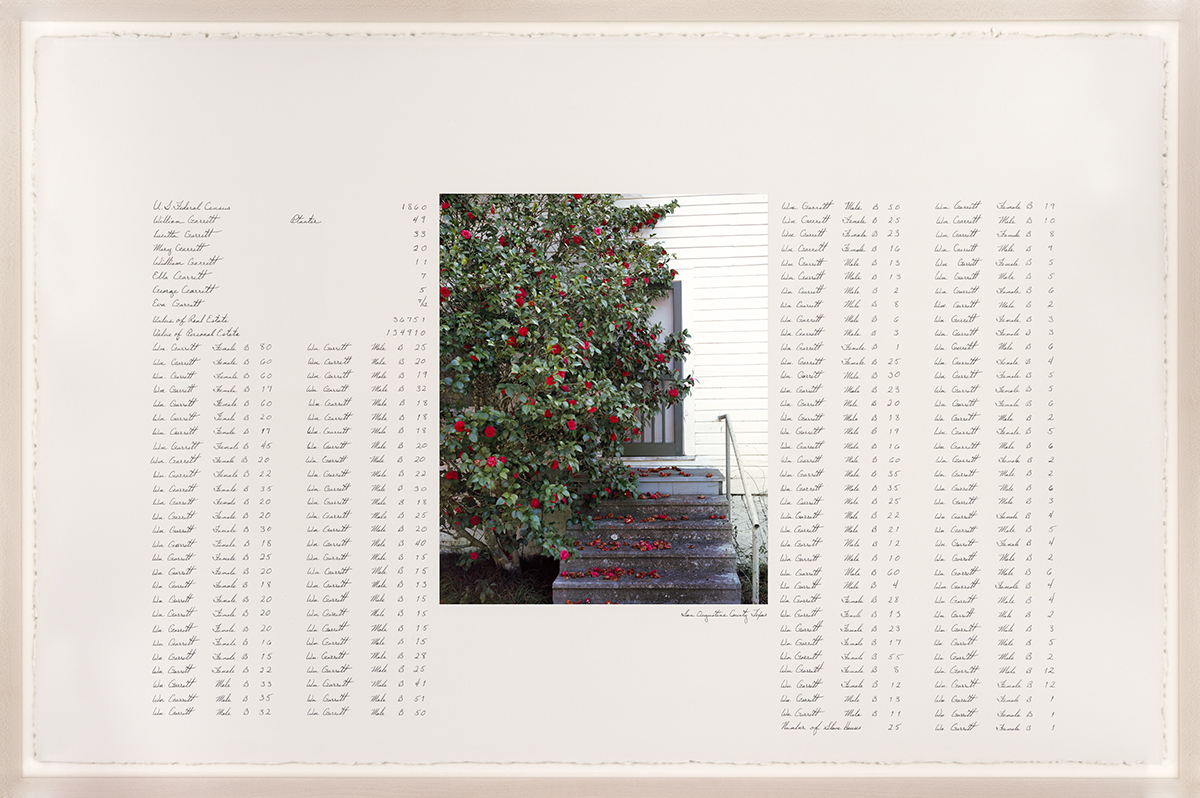