". . . Taylor has managed to make [jazz viola] work through his deft touch and improvisatory skills. " The Washington Post

Imagine what might happen if you dared to blur all these boundaries between pop music and jazz, between rock music and classical music, between the musical realm and the lyrical realm, between the honky-tonk and the church, and in the spirit of art and fun and experimentation, you reached out for something . . . transcendent? more. . . .

The last few years have seen local strings player/composer Will Taylor engaged in numerous musical collaborations, many jazz-based, some pop-oriented, a few highly curious, and all, in the end, responsible for the creation of some wonderful new music. more. . . . Austin Chronicle

"Austin's claim to being the live-music capital might be hyperbolic, but this finely nuanced, gorgeously recorded CD by violist Taylor speaks volumes for that city's scene. . . . there's still much to love, from the imaginatively reworked "Cherokee" to the pensive, original "Raga". " Entertainment Weekly

" Local jazz viola virtuoso Will Taylor is one of the most unusual and exciting young instrumental talents on the national scene. He swings, he soars and he never ceases to amaze. " Austin American Statesman

". . . a well-rehearsed and sensitive ensemble, one whose members demonstrate professionalism as well as cohesiveness." Jon Poses Columbia Daily Tribune

". . . Taylor possesses a versatility, drive and passion that would be the envy of musicians twice his age." Albuquerque Journal

". . . Will Taylor is a serious composer who bridges classical and jazz traditions. His "Bob and Dave" partakes of Stravinsky and Ravel without really imitating them, yet is a full-fledged jazz composition for string quartet and jazz band." Mike Greenberg San Antonio Express-News

". . . what lifts Taylor, beyond the novelty category is the originality of his Music. . . . he somehow manages to take some of the swing of Stephane Grappelli and the Hot Club of France into bracingly modern territory that avoids fusion and avantgarde cliches." Boston Globe

"Taylor is breaking all the rules, in a good way. . . . Simple Gifts is haunting, engaging, sexy, intelligent and even humorous. There's a distinct possibility that Taylor will join the ranks of Harry Connick, Jr. and the Marsalis brothers as a classically-trained young artist with mass appeal. " Shepherd Express

". . . a jazz violist and composer who absolutely transcends his instrument's stereotypical European refinement and restraint. His work is dynamic, colorful and, yes, even edgy." Houston Post

". . . There's no one else doing what he's doing and the chance to hear the rich sounds at the edge of jazz is something you'll wish you could wrap up and take home." Austin Chronicle

As to the quality of the music and the professionalism, this production is far superior over the numerous recordings issued by the major record companies. Esquire, Dutch Version

If there are any pitfalls to the concept of Austin's Strings Attached, it's that Will Taylor's group can at times overwhelm the artists they work with. A match with A-town's feral songsmith James McMurtry, then, posed an interesting question. Would he bland out or would they turn it up and meet him in the middle? A spin of McMurtry's magnificent new album, Childish Things (Compadre), offered an easy answer. On it he's branched out a bit from the guitar, bass, and drums he uses live to include fiddle, organ, and horns, each an important part of Strings Attached. In front of a nearly full church, Taylor's quintet opened the performance with a couple of jazzy originals that flaunted the act's impressive ability to work as an ensemble. McMurtry was then introduced and immediately put any fears to rest by pronouncing half seriously, "Remember, if it's too loud, you're too old." Ringing with tunes from Childish Things and with Strings Attached augmented by Ronnie Johnson, McMurtry's bass player, the altar at St. David's rocked like it seldom, if ever, has before. One thing Taylor's group is best at is bringing out undiscovered nuances from the songs of others, and the String-benders' magic was in full bloom, especially on the two-stepping "Memorial Day" and a jam that approached liftoff in the middle of "Choctaw Bingo." With the church's refined acoustic setting, McMurtry's lyrical genius – his ability to grasp distinct moments of time – was explicit on acoustic versions of the lonesome "Lights of Cheyenne" and fervent "Holiday." The encore, electric protest "We Can't Make It Here," a roaring fiddle fueled freakout, served as the perfect nightcap for a hallowed helping of art and grit.

I found the Strings Attached's performance to be one of the best Austin music experiences I've ever had; talented artists, uniquely arranged songs, in a venue that allows you to focus on the music—not the distractions typical in the club scene. Will has Extra talent all over the stage.. upcoming super soulful Nakia, multi talented John Pointer, and the beautiful Natile Zoe are all singing back up and lead at special moments. World class drums and percussion from Pat Mastelotto and Jason Mckenzie. Shawn Sanders on cello with Steve Zirkle on trumpet and Glen Rexach on Bass round out Will's highly ambitious quartet and these guys pack a huge punch so wear proper head gear! Overall the collage mixed with live cameras light show and the church itself mixed in with the performance to give me a feeling I remembered having in the late sixties when the underground all age psychedelic dungeons of Houston Texas forever shaped my mind. And when Phil and the crew did their encore..ARE YOU EXPERIENCED...it was truly one of the best things I have heard in this century. One of the most amazing things happening in this was John pointers unbelievably cool microphone hip hop mouth orchestration..he was doing backwards drums and vocals that sounded like five thousand dollars worth of rack mount gear...keep it up John!!! So do yourself a favor and visit myspace.com/stringsattached or philbrownguitar.com and maybe you can obtain the live recording from this performance...or anything else you can get your hands on! 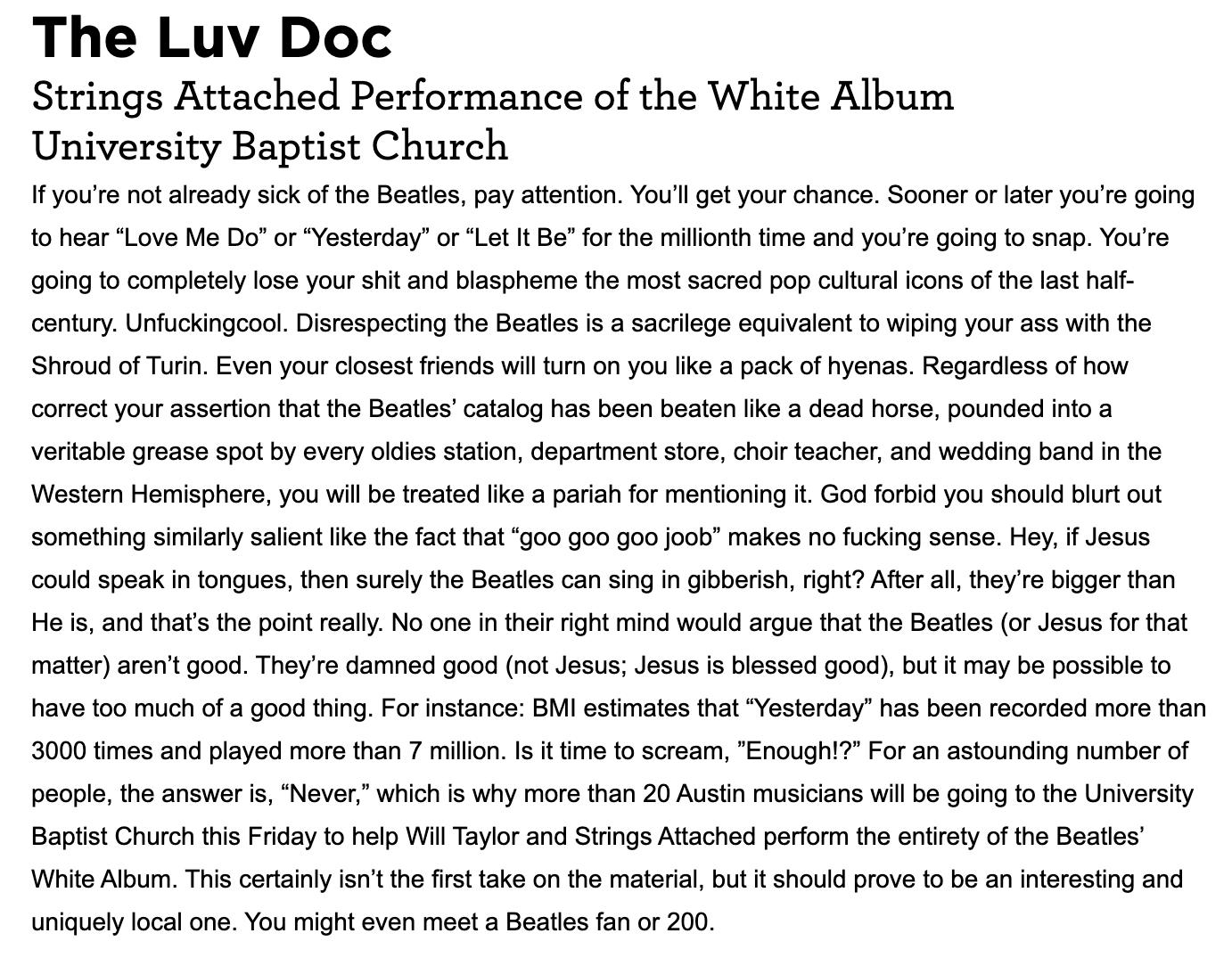