An Analysis of Gold Efficiency in League of Legends

A common distinction in League of Legends is the difference between a “Support” champion and a “Marksman” champion. Supports, as the name implies, are generally there to ensure that the Marksmen perform well.  To ensure that the Marksmen perform better, the supporting role often gives up their gold to allow the Marksmen to become richer. The implicit assumption here is that the Marksmen will make better use of this gold. In order to analyze the effect gold income had on champion performance, I sampled the recent games of the Challenger players and recorded how well each champion did and compared that to their relative amount of gold earned. I found that, as expected, the Marksmen tended have a larger increase in performance as they gained gold than the Supports. However, this was not the case for every Marksman and Support. A select few supports actually seemed to have a larger increase in performance when they received gold than a select few Marksmen. This suggests that in some cases, the better strategy would be to give gold to the conventional support rather than the conventional marksman.

Marksmen are notorious for complaining when a support takes their precious last hits.[1] Common knowledge has it that the Marksmen are more dependent on gold than the support and therefore the support’s only job is to help the Marksman do well. But what if the complaints of all the angry Vayne players[2] are unfounded? Each champion does better when they have more gold, but the question is: how much better do Marksmen do with gold than supports?

To evaluate this, I looked at the performance of each champion as a function of their portion of gold. Win rate as a function of gold may seem to be the best measure for performance, but the data for win rates is noisy. For instance, a single player could perform very well, but there are four other players that could ruin the good performance. There are too many factors that go in to into a victory or a loss and it becomes hard to tell who really was instrumental to the result. I chose to measure performance using a score based off just kills and deaths. The use of a kill and death score creates a more accurate portrayal of performance than a win and loss ratio because it is not an “all or nothing” measure. Additionally, the margins for a win-loss metric are extremely small. This means it would require much more data to create a meaningful prediction of gold income to a win-loss ratio.

I obtained the data using Riots API and a Python library called Riot-Watcher[3]. I analyzed the 10 most recent games from each of the players in the Challenger league. After removing duplicate games, I recorded the kills, deaths and assists of each champion along with their share of the game’s gold. While it may seem more intuitive to use the actual amount of gold each champion earned, this causes some issues. A champion with 15,000 gold in a 15 minute game could be rich in that game, but in a different 45 minute game, having just 15,000 would mean that champion is very poor. Instead, I recorded each champion’s share of the total game gold for each game. For example, if a champion has 10 gold in a game where all of the champion’s gold pooled together is 100 that champion would have a gold percentage of 10%. This means that any champion with more than 10% of the gold is richer than would be expected if the gold was shared evenly.

Next I combined all of the kills, deaths and assists of a single champion into a single “score”. To create this score, assigned a weight to kills, deaths. I opted to keep it simple and assign each kill a weight of one “point” and each death a weight of negative one “point”. It may seem logical to include assists in a score metric, I found this to be very arbitrary. An assist can range from being as important as the kill to as useless as a single point of damage. Assigning a general value to an assist became a very biased process and led to removing them from the calculations altogether.

To make sense of the data, I fit each set of ordered pairs to a linear regression, providing a prediction for a score based on the gold earned. The slope as of this function is the predicted increase in score per percentage of the games’ gold. I will refer to this as gold scaling. 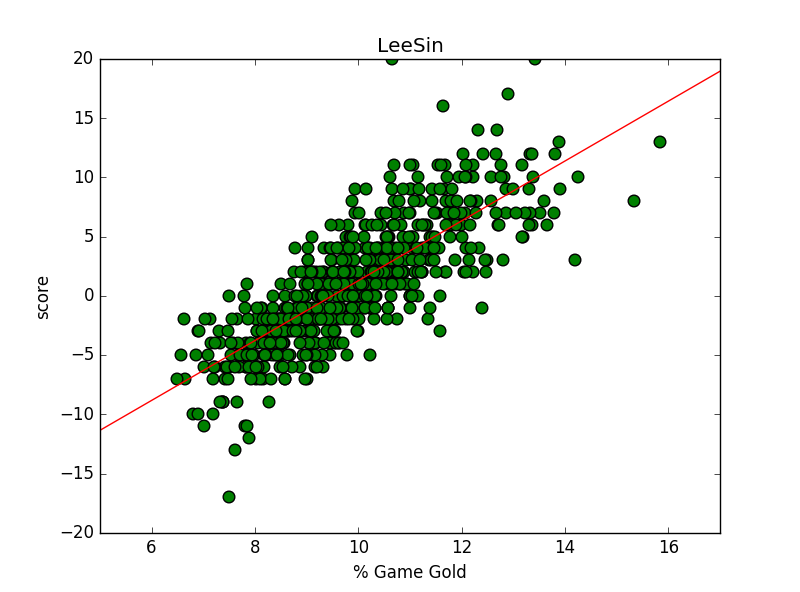 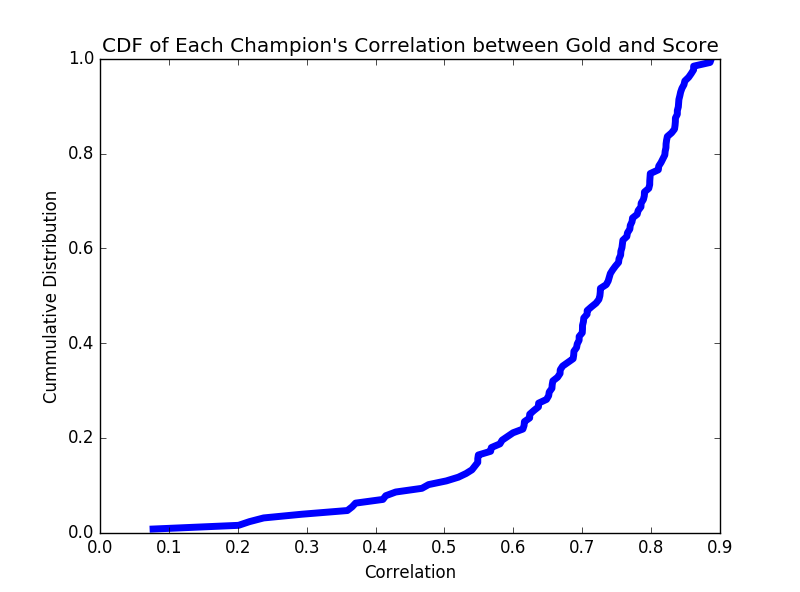 Figure 2 depicts a Cumulative Distribution Function (CDF) of the correlations of the linear regression for each champion. The correlation coefficient is the value that explains how well the variation in the data can be explained by a linear model. In other words, it is a measure for how well a straight line represents the data. The CDF depicts the probability of a champion having a correlation less than a given x axis value. For example, the x axis value of .3 would be read as the probability of a champion having a correlation of .3 or lower. Around 90% of the champions had a correlation of .5 or greater. That implies that for that 90% of the champion pool, at least 25% of the variation in their score can be accounted for by the variation in their gold. Any champions that had a correlation lower than .5 I discarded as their data could not be explained in a meaningful fashion by a linear relationship. This included:

This does not mean these champions did not have higher scores when they obtained more gold, but rather that their relationship could not be described as linear.

The linear regression slope is the value that indicates how much better a champion would perform as he or she gained more gold. In other words, the champions that have greater slopes are the ones that seemed to scale better with gold.

To visualize each of the champions in a meaningful way, I sorted the champions into their most common role as defined by RIOT in their API and created a CDF of the slopes of each champion. 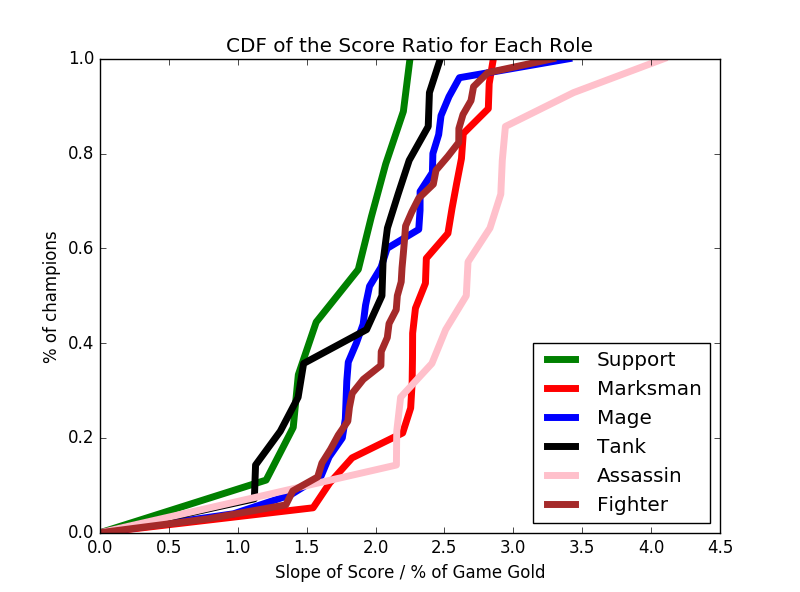 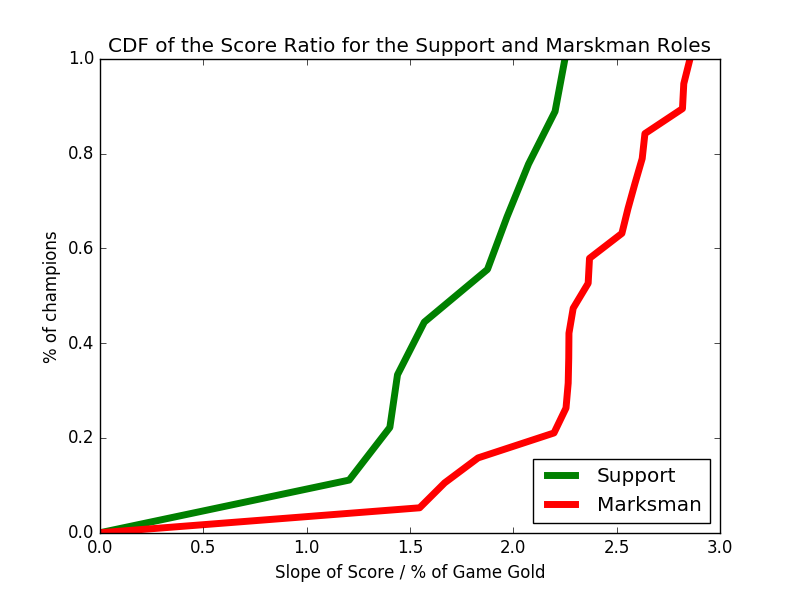 Table 1: Numerical values of the gold to score ratio of Marksmen

The right column is the increase in score per percentage of the games gold.

(Other roles can be found in the appendix)

Table 2: Numeric values for the gold to score ratio of the Supports. The right column is the increase in score per percentage of the game’s gold.

As expected, roles such as Assassins and Marksman tend to have higher gold to score ratios. This can be seen in figure three as most of the Assassin and Marksman lines fall to the right of the others. This means a higher percentage of Assassins and Marksman have higher score to gold ratios. This follows the intuition that Marksmen are supposed to get more gold than the supports. But, the interesting part is that not all of the marksman have greater gold to score ratios than the other roles. For example, when looking at the CDF of the Marksman role and the CDF of supports role, there is a sizeable overlap. The top 20% of the supports seem to have a better gold to score scaling than the bottom 20% of the Marksman. For example, Bard has a ratio of gold to score of 2.20 as seen in Table 2. This means for every additional percentage of the total game gold that Bard obtains, he is predicted to have a score of 2.20 points higher than his average performance, or two more kills than deaths. Sivir, a common Marksmen, only has a gold to score ratio of 1.55 as seen in Table 1. This means that for each additional percentage of the game’s gold Sivir earns, she is only predicted to have her score increased by 1.55, or one a half kills more than deaths.

These results only indicate a relationship between score and gold, not a causation as it relies on correlations. It may be that some other factor is the cause of this relationship and it is not gold that causes the increase in score. For example, the Supports that have a high gold to score ratio might not have this because they perform better with gold, but rather in games where they happen to have gold, their team does better. Additionally, scores are not standardized by time. In longer games, scores will tend to deviate farther from the mean, 0. In the future, it could prove more accurate to use a metric that takes time into account, such as kills and deaths per minute.

The data supports the common assumption that the marksmen roll will perform better with gold than the support roll. But, this is found to not be not true for every combination of Support and Marksman as some Supports scale better than some Marksmen. This analysis focuses on the Support and Marksman rolls because these two role’s share the same source of income. But, the appendix section includes data for each of the roles. This could lead to a similar analysis of the other roles. For example, Leblanc has the lowest gold to score ratio of the assassin category. This could indicate that Leblanc would perform nearly as well in a supporting role where she is expected to gain less gold. This would allow another champion to use the middle lane and gain more gold.

Because this work relies solely on correlations, it is impossible to conclude that difference in gold is causing the variation in score. The only way to see if this relationship is truly a causation is true is through play testing. This can be done informally through the switching which champions take the last-hits bottom lane.

This appendix contains the raw data for each champion. Below is a table for each role and a table for all roles.

Table A: All Roles

[2]2 Vayne is a typical Marskman