So, where are we? Why is this all so confusing?

Building out the Data Pipeline Pattern

A push toward everything “In the Cloud”

My Suggestions for becoming a “Data Scientist”

So, where are we? Why is this all so confusing?

“a cultural, technological, and scholarly phenomenon that rests on the interplay of technology, analysis, and mythology that provokes extensive utopian and dystopian rhetoric.” - danah boyd & Kate Crawford (Critical Questions for Big Data)

“Big data is what happened when the cost of storing information became less than the cost of making the decision to throw it away.” - George Dyson

The cliffhanger: What do we need to invest in?

Despite the (IMO) unfortunate term, defining the role of “Data Scientist” is important to identify, and to help define this increasingly important role in organizations.

DJ Patil: What is a Data Scientist?

“It’s a high-ranking professional with the training and curiosity to make discoveries in the world of big data...  If your organization stores multiple petabytes of data, if the information most critical to your business resides in forms other than rows and columns of numbers, or if answering your biggest question would involve a “mashup” of several analytical efforts, you’ve got a big data opportunity.”

“Many social/digital scientists are reluctant to invest in making data because it’s much more costly and risky than analyzing data you already have available.” - Sean Taylor

It’s not as easy as just throwing a bunch of files into a cloud storage provider.

Goal: Understand who the audience is, what your budget dictates,

Tendency for confusion around use cases, results in re-inventing the wheel, and incredible niche technology. Example: Cassandra vs MongoDB vs CouchDB vs Redis vs Riak vs HBase vs Couchbase vs Neo4j vs Hypertable vs ElasticSearch vs Accumulo vs VoltDB vs Scalaris

Building out the Data Pipeline Pattern

A common pattern often seen in this space is the use of a schema-less non-relational database to collect data, a read-only structured schema analytics databases are being used to run queries quickly over this data, with MapReduce transformation step in the middle. 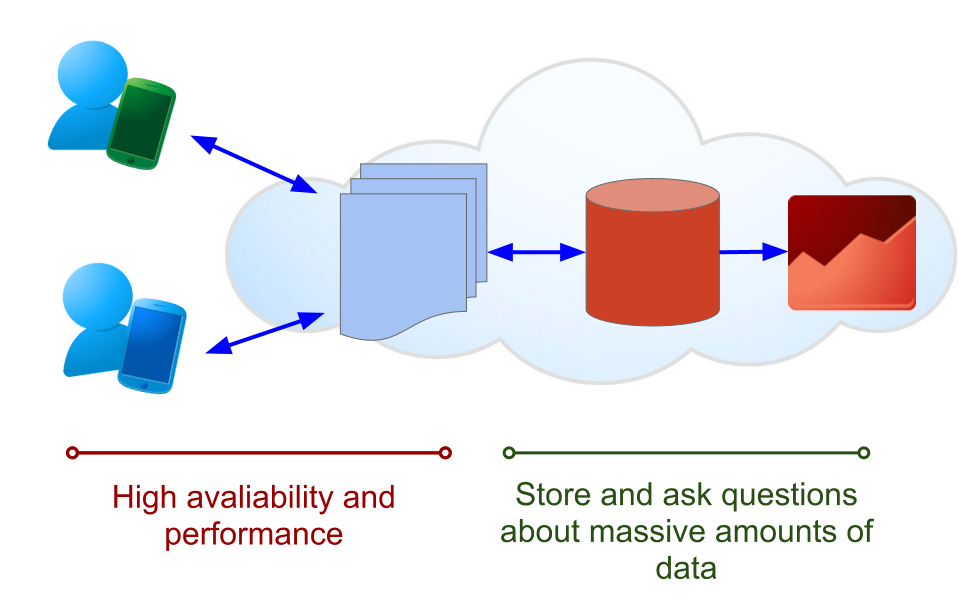 Because of the process for open-source application, there is a lot of “mismatch” between the tools needed to build this pipeline pattern.

Visualization is a rich field with much cultural history (and the potential for telling a dishonest story).

There are a multitude of tools, both commercial and open source, for exploring data visually, such Tableau, QlikView, Gephi, etc

Building your own, or graphing as you explore:

Combination of technologies: memSQL and BigQuery

Visualizing all the Ships in the World

A push toward everything “In the Cloud”

Convergence: Tools that offer a best of many worlds

What will be automated, what will require even more skilled professional... humans?

My Suggestions for becoming a “Data Scientist”

Moving and asking questions about data