The LEGO Mindstorms Set comes with all sorts of gears, but up to this point we haven't explored how to use them.    Today we're going to see how gears work, and how they can be useful in building robots and other devices.  Below is a picture of some of the basic gears that come with the Mindstorms set, as well as a definition of some of the different gear types that are included.  The different shaped gears have different purposes, but we'll focus on the spur gears. 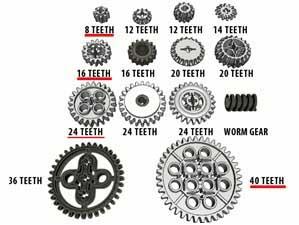 Question 1:  In the pictures below, what types of gears are being used in the hand mixer and the electric mixer?  Write the answers in the spaces below the pictures: 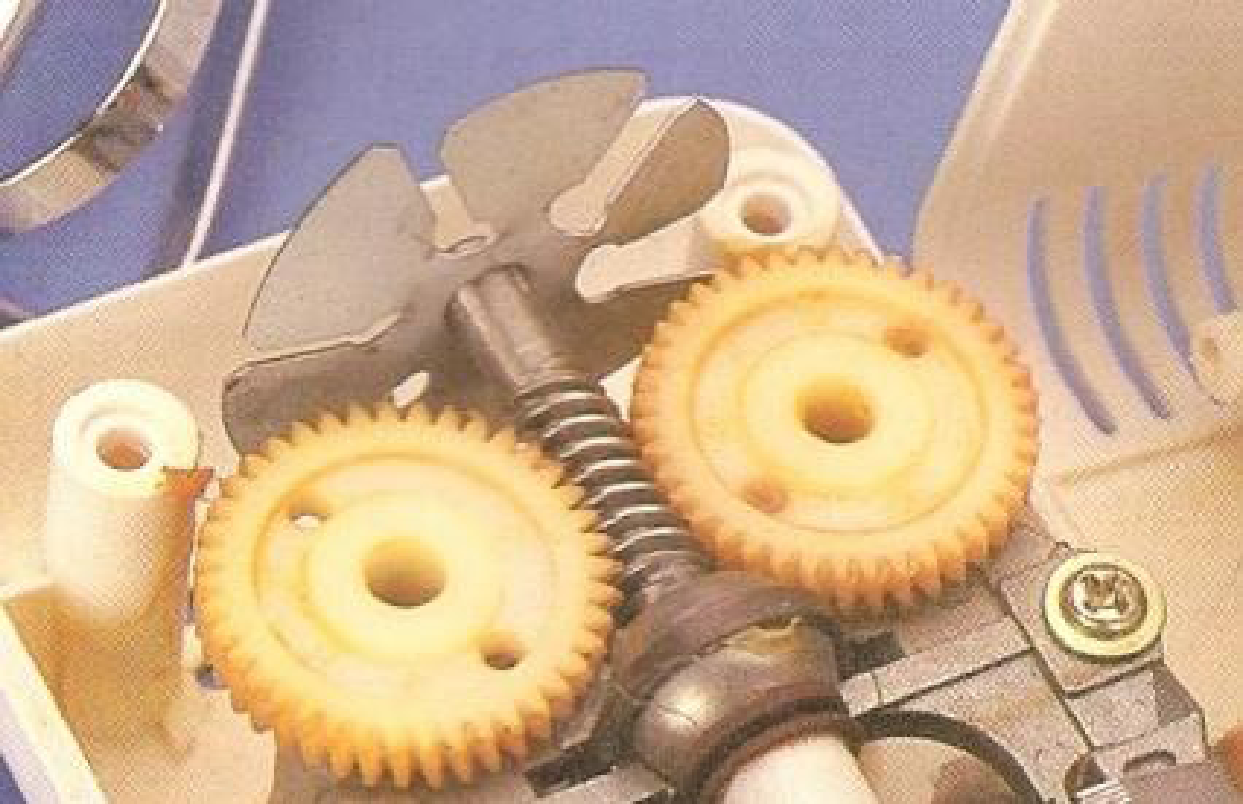 To make the Mindstorms robot move, motors provide power to turn the wheels.  We use gears for three main reasons:

Let's see how that works.  Gears have "Teeth" that mesh together, so when one gear turns, it makes the other gear turn, too.  Notice that the gears turn in opposite directions.  The driver gear is the one that provides the power, and the follower gear gets turned by the driver.  The gears in the first picture below are the same size, so each time the driver completes one turn, the follower completes one turn.

Gearing down and Gearing Up:

You can take advantage of gear ratios to put together a set of gears where the follower goes much more quickly than the driver (or vice versa).   An example of a gear chain is shown below.  The because the big gears have 40 teeth, and the small gears  have 8 teeth, the small gears turn around 5 times for every turn of the big gear (5 x 8 = 40).  That means, if we are gearing up, each set of gears increases the speed of the axle by a factor of 5.  Since we have geared up twice, we have increased the speed by a factor of 5 x 5 = 25 times! 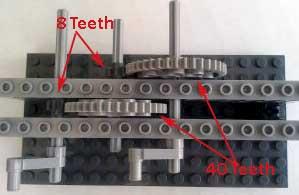 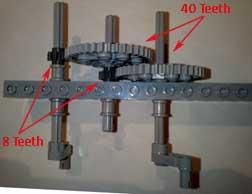 As we said above, turning the rightmost crank in each picture, makes the leftmost crank turn 25 times faster.  There is a trade-off for this increased speed, however.  The faster crank will have a factor of 25 times less power.

Exercise 1:  Build a gear chain similar to the pictures above, and see if you can feel the difference in power that you get when turning each handle.  You can feel this with your hands by trying to hold one handle still while trying to turn the other.  You will notice that one of the handles will be harder to turn than the other one.

Exercise 2: Can you build a gear chain so that the follower gear goes more than 100 times faster than the driver gear?  Try it!

Question 2:   In the picture below, if gear A is turning clockwise, as shown, what direction are each of the other gears going (clockwise or counter-clockwise)?  Which gear is turning the slowest?

Exercise3:  Build a "Gear-Bot"  This is an engineering challenge.  Can you build a robot that uses gear ratios to increase its speed?  Your instructor has a geared robot that you can use as an example.  How fast can you get your robot to go?