Rather than indulging a lengthy philosophical discussion about the nature of reality, knowledge, and what is or is not science, I’m going to describe in a very general manner how I think all the science I know works. If something has a hard time fitting into this description, I’d have a hard time calling into science. The words theory, model, scope and system are at the core at this discussion, and I will define what I mean my each of those.

However, if you’d feel more comfortable because they are already loaded with meaning and think it might help you think more clearly about things, you can replace them with himperninckle, flatterbask, pogglepy and klutternusk, or whatever you like better.

At the end there’s also a bonus discussion about my take on the nature of reality, which you can keep calling that with no problem, since I think it’s a word sufficiently devoid of meaning to avoid any serious impairment of our discussion.

A system is a subset of reality. I’m sorry that’s a little broad, but a system can be really anything (that’s why I like it).

A model is something you can use to make a measurable prediction about reality. They can be really anything, a piece of math, some computational calculation, an actual physical entity that can represent what you want to observe.

A model is different from a theory in that a theory is just a framework for thought, and it may or may not relate to reality or let you derive a specific expectation. A hypothesis would a piece of a theory that you can test, and in my definition would be a type of model.

Models and theories pertain to a given system, and within that system they have a scope, the extent to which they are relevant. A model may have a very limited scope in a system, but within that scope it might work very well and make good predictions.

In order to do science, you must observe some aspect of reality and collect data about it. You would think that, in principle, you could collect the data first and think about it later. However, turns out that there are so many things you can measure and different ways you can perform an experiment that if you don’t know exactly what you want to measure, your data will be most likely rubbish. So the first thing you really need to do is to define an expectation about the aspect of reality you want to observe.

To do that you need a model. Once you have an expectation about something you can observe in a given system, you go and measure it.  Let’s say you’re measuring aspect A and aspect B of reality, and you expect they have a linear relation like this: 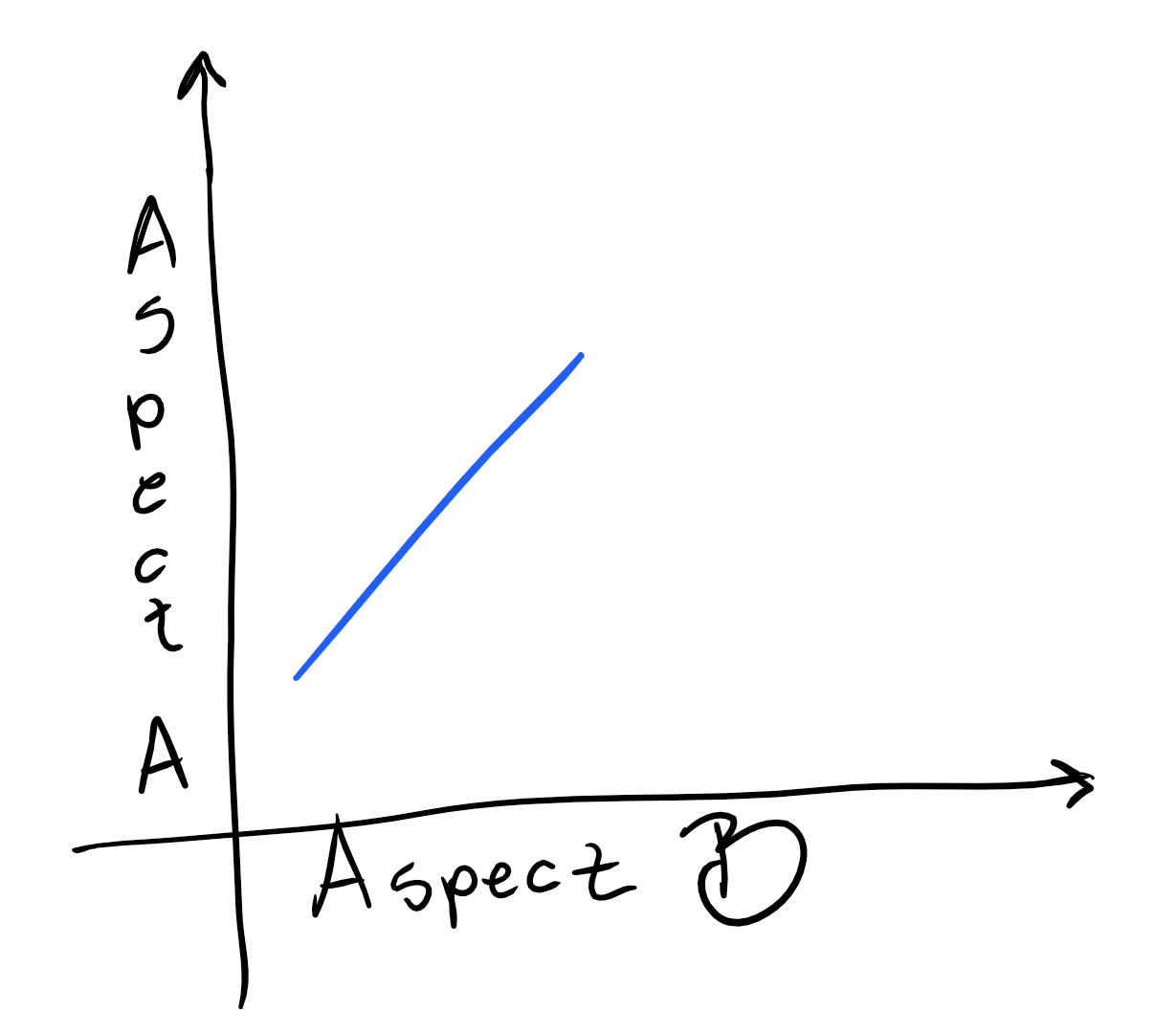 So you go out and make a bunch of measurements by measuring A in relation to B (data points, in red) and you get the following: 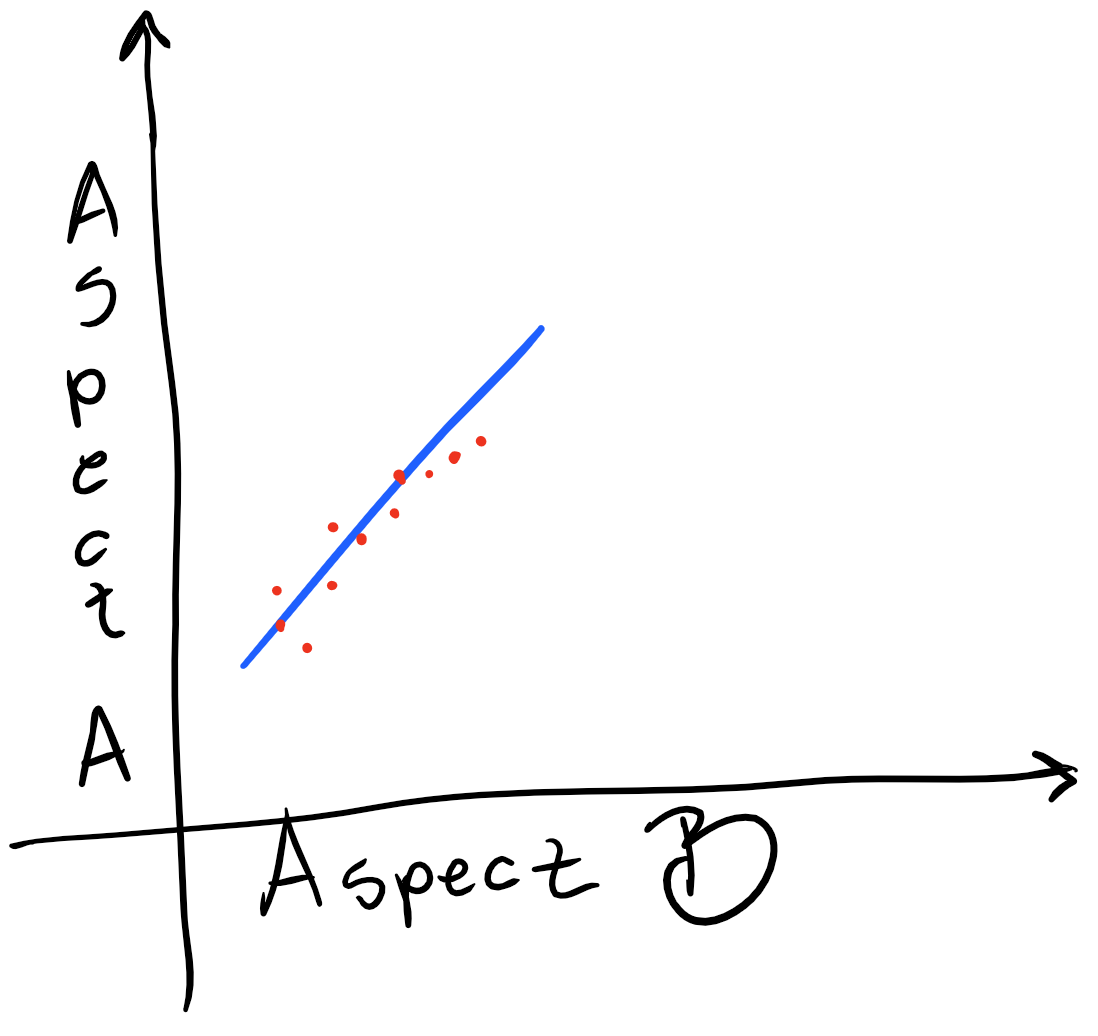 That looks great! Your model is correct! You’ve captured the essence of reality! You can go home and celebrate. But first you decide to make some more measurements: 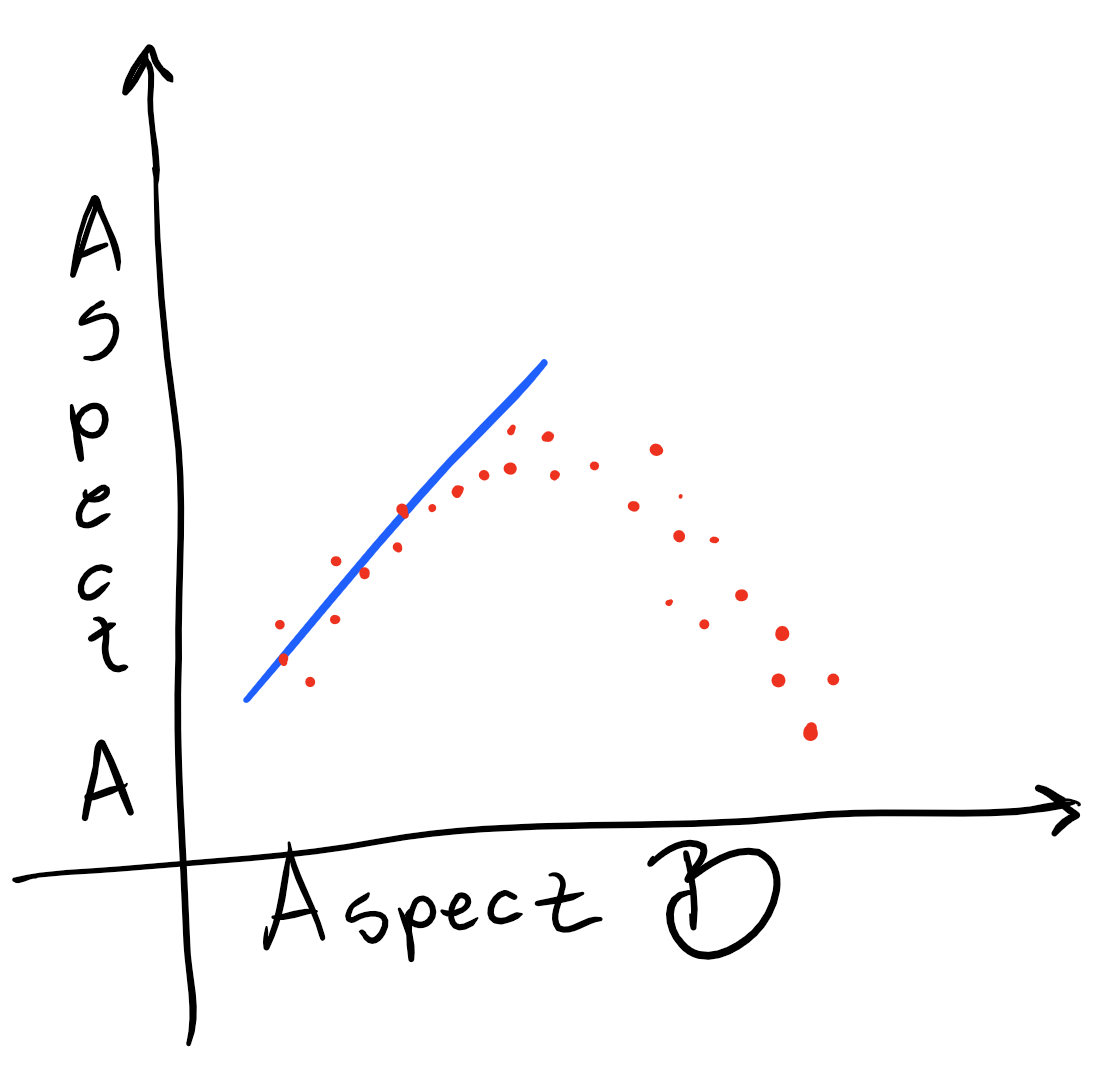 Oh no! Your model is wrong! You’re no better that the guys who thought the sun circled the earth! What you do now? Well, you could just say the model is fine, and works great within a given range for A and B. You could also come up with a new model. Because you had an expectation, the fulfillment or not of that expectation tells you something about the assumptions you used to generate that expectation. You could revisit your assumptions, and see what you could change in order to derive expectations that align with your observations. You might end up with something like this for your new model: 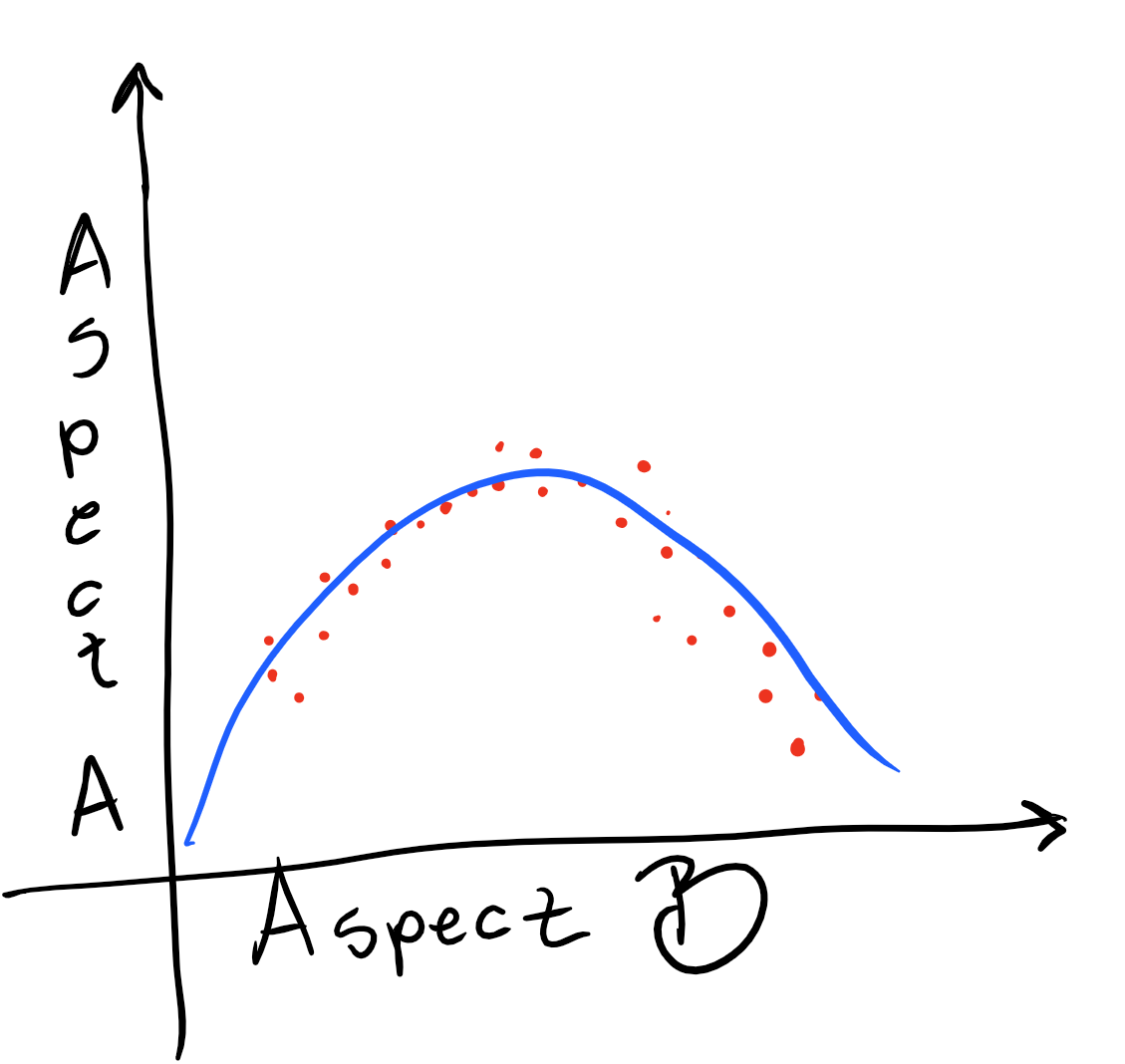 And the nice thing about that is that you might make new predictions, about things you didn’t think about before. You might even find out that your model is valid to an extent much greater than you initially thought: 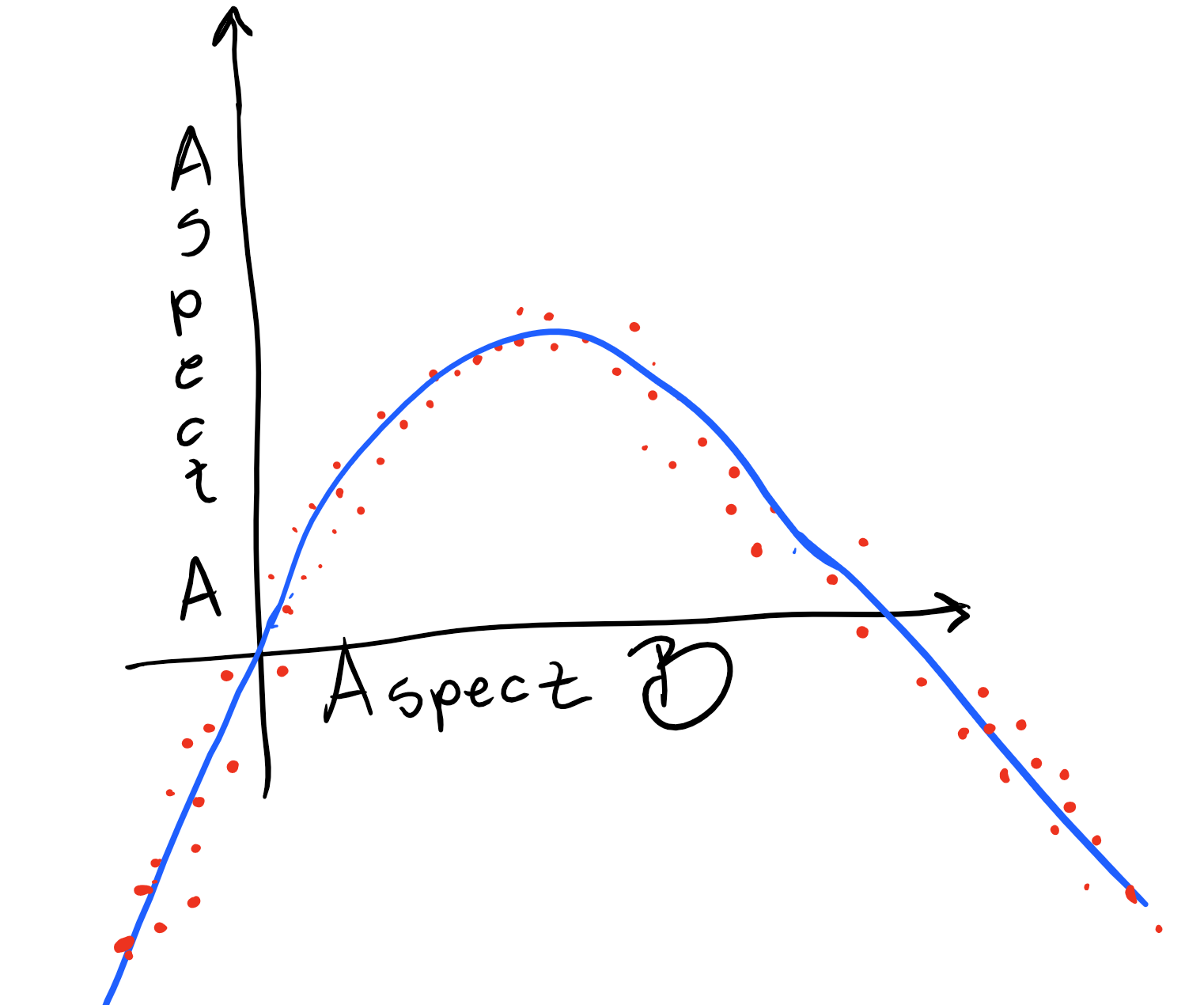 But you have to keep in mind that for as good as they may be, models always have a scope, the extent to which they make good predictions within a given system. And the scope of a model is really dictated by how good you want your predictions to be - how much disagreement between predictions and observation you’re willing to tolerate. You might even use a model that makes worse predictions because it’s easier to use - such as describing our observations using straight lines rather than curves: 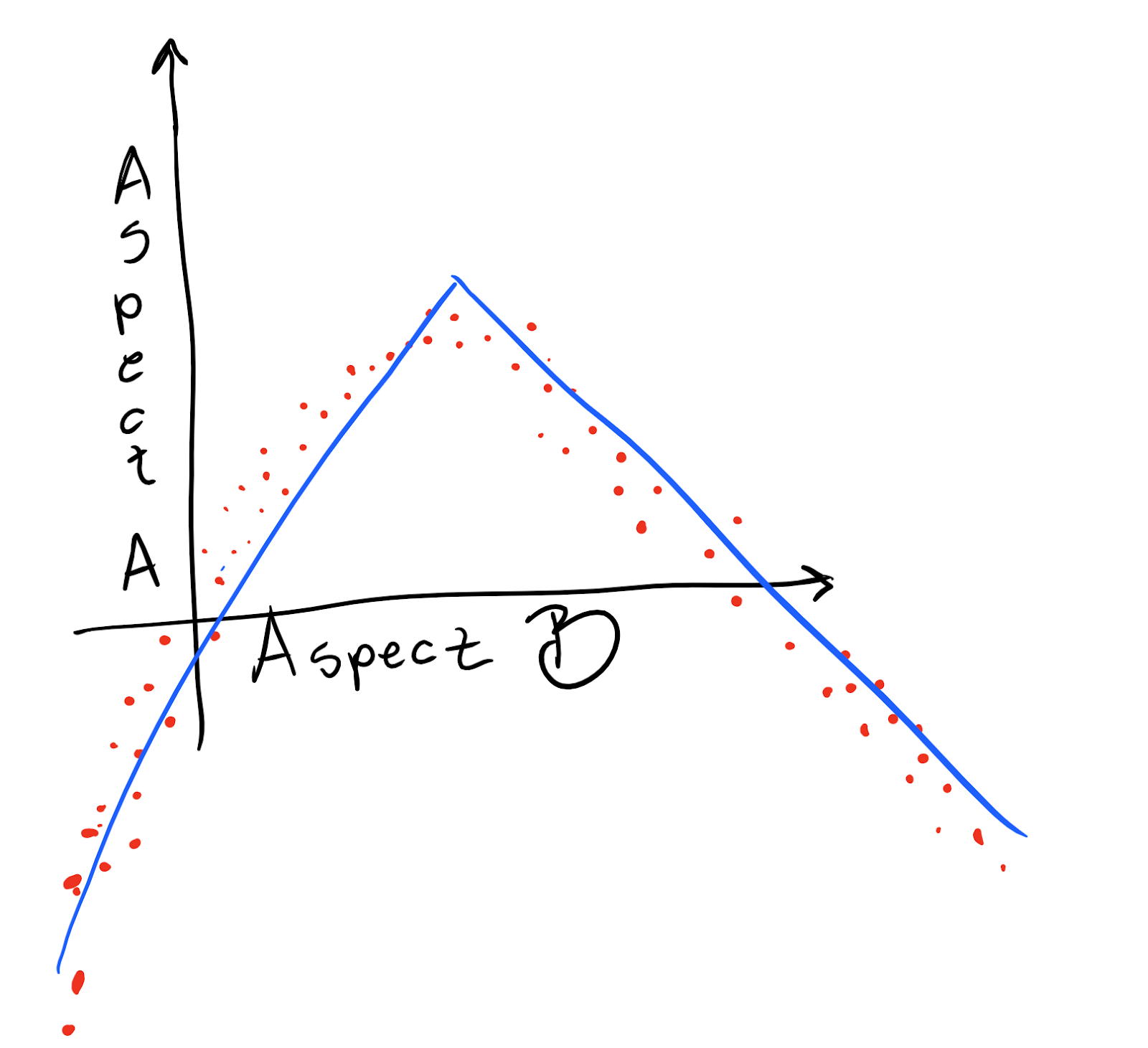 Bonus: Eduardo’s take on the nature of reality

There is no such thing as objective Reality, with capital R (or we don’t have access to it, which is equivalent). Also free will is an illusion (and the greatest joke on earth). Our sensation of progress regarding our knowledge of reality stems from asymptotically increasing better descriptions of the aspects of reality to which we have access, as shown  below (you can only do so much when squishing all accessible aspects of reality in two dimensions). 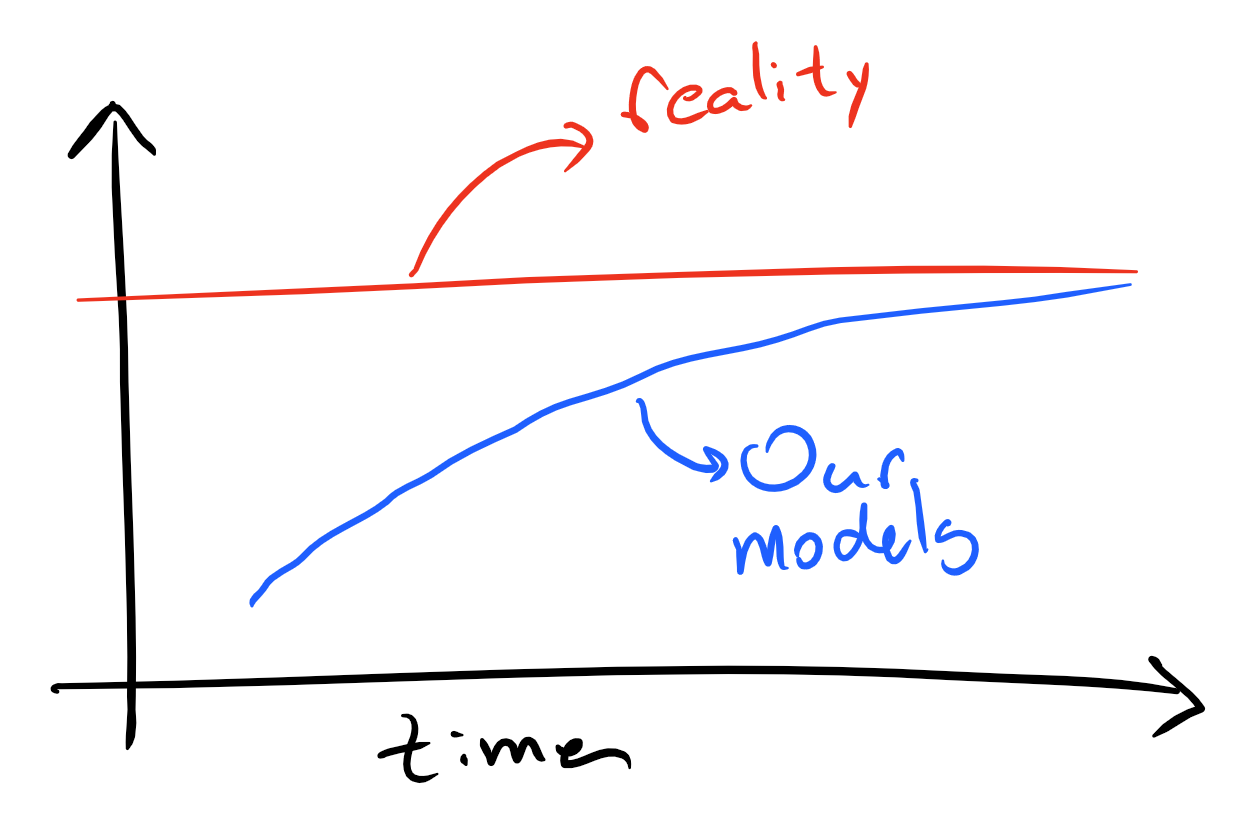 Because we have some pretty good models, most people confound models with reality itself. I remember doing that with newtonian mechanics. One day I read about relativity, and I had a really hard time:

“So they were LYING to me all this time?? The textbooks??”

But eventually I came to grips with it:

“Ah! I get it now! Einstein got it right, this is Reality! Phew, I’m glad they got it all figured out already!”

I rest my case.