About speeds and rates

About base rates and rate adders

All motion stops on Y axis when RateAdderTime expires: fixed in V94

The X axis in the SiTech controller corresponds to the Declination axis (on an equatorial mount) or the Altitude axis on an Alt-Az mount.

The Y axis in the SiTech controller corresponds to the Right Ascension axis (on an equatorial mount) or the Azimuth axis on an Alt-Az mount.

About speeds and rates

The controller loops 1953 times per second. Fields that reference a speed/velocity/rate (e.g. the XS command) express this speed as a 32-bit number representing the number of ticks the motor encoder should advance per loop, multiplied by 2^16 (= 65,536) to express fractional values.

For example, if you want to advance the motor 1,000 counts per second, this corresponds to:

which is expressed as the integer value:

The SiTech Operations Manual describes the following “C++” functions (converted to something like Python here) to do similar conversions:

These coefficients can be derived as follows:

The SiTech ASCII command set has a lot of commands that can be typed in from a terminal program.  But this was problematic when communications were not very good (noisy RS232 lines, etc).  Sometimes when SiTechExe sent a binary command, the controller did not receive it as a binary command.  Then, by chance, some of the binary data would equal an ASCII command, such as "Reset Controller", or other commands, and the controller would do unpredictable things.

To solve this, I devised an Ascii Checksum Mode (ACS).  If you are in the ACS mode, you send another byte after the <cr> byte, which is the 8 bit sum of all the bytes, inverted.

If controller is in the ACS mode, and it is receiving characters, if the character stream stops for more than 50 mSecs, the controller resets the serial stream, and the next character will be placed at the beginning of the receive buffer.

If the controller is not in the ACS mode, you can send characters with any time spacing, and it will always respond.

Example of a "YXS" command, in ACS mode:

One more oddity: If controller is in the ACS mode, and you want to "talk" to the focuser/rotator, then you replace the first 'X' with 'T', and the first 'Y' with 'U' (same as previously), but you calculate the checksum based on if it had been the 'X' or 'Y'.

The following  commands affect both servos, and only have an X command

XBits is for the X axis

YBits is for the Y axis

SiTechExe flips SlewRate and GuideRate to negative values to indicate that the mount is “through the pole” (e.g. beyond zenith in an Alt-Az, or through the celestial pole on a GEM) and the handpad directions should be inverted.

The motor position reported by (for example) the YXR command needs a bit of explanation. Each axis has a motor setpoint, which is the position where the controller wants the motor to be at a given instant. The difference between the actual motor encoder position and the setpoint is the error, provided by the XE and YE commands. 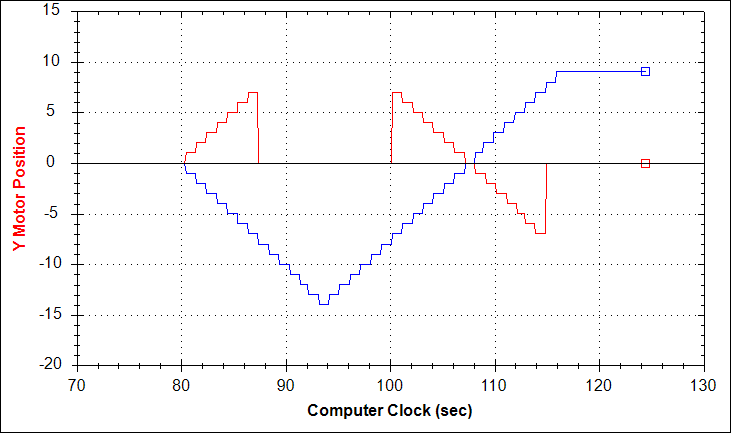 As another example, if the motor is stopped (but still in Auto mode) and an external force is applied to the motor, the reported position and error changes as follows: 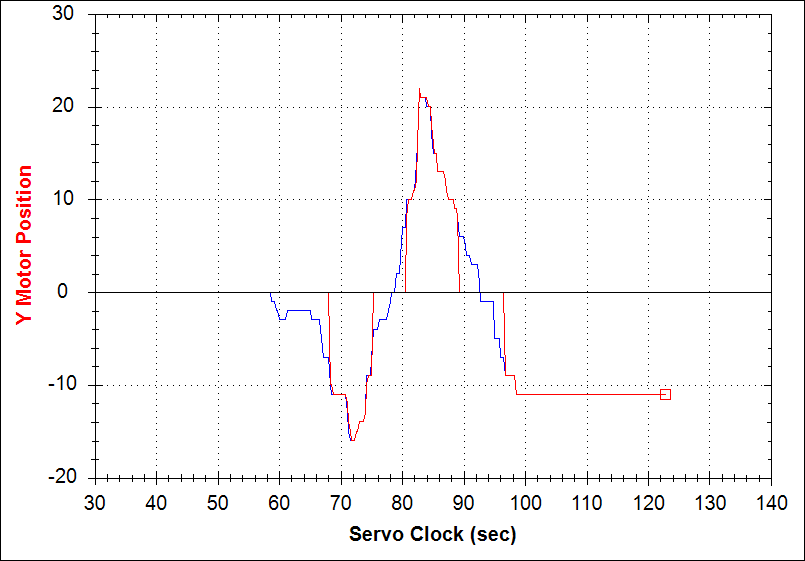 Notice that the reported motor position remains 0 (the setpoint) until the motor has been forced out of position by more than 7 counts.

In pseudocode, the behavior seems to be as follows:

Or, from the point of view of a client who wants to retrieve the actual motor position:

This has been tested on firmwares V89 and V94.

When the controller receives a 'Q' as the first character in a line, it responds emulating the Tangent “Q” protocol.  The encoder resolution is always 18000 (the controller uses the configured values for encoder ticks per revolution for the Scope Encoders, and converts it to 18000).

0AAh Puts the servo into the PicServo Emulation mode (no CR required).  See http://www.jrkerr.com/psdata.pdf for a description.  There are some items different, all motion control is the same.  The differences are descibed below.

The controller supports a few ASCII commands that combine with binary data to allow reading and controlling the servo in a very efficient manner.

When packing binary data, all multi-byte values (ints and longs) are encoded LSB first. For example:

Checksums are calculated as the 16-bit sum of the bytes in the binary payload (not including the checksum bytes themselves), with the high-order byte inverted. The low-order byte comes first in the data stream. For example, the (artificially short) payload:

would have a checksum of:

About base rates and rate adders

The Rate Adder is added to the base rate for the number of servo loops specified.  For instance if the base rate is 2000 and the rate adder is -2100, then the rate will be -100 for 66 servo loops.  This in effect will change the direction of the motor for 66 servo loops.  Note that in SiTechExe, the total rate is truncated to 0 so it never actually changes motor directions, because, if the controller has backlash enabled, it will toggle back and forth.

Prior to firmware V89, the Rate Adder time appears to be ignored, and both the base rate and rate adder will be applied indefinitely.

All motion stops on Y axis when RateAdderTime expires: fixed in V94

With firmware V89, there have been cases where the controller stops all motion on an axis (both base rate and rate adder) when a non-zero Rate Adder time expires. If the Rate Adder time is 0, then the Base Rate applies indefinitely. It is not yet known how the controller enters this state, but it likely applies to controllers prior to V94.

The problem usually manifests when homing the telescope. SiTechExe reports “Slewing First Slew” but the axis does not move. In contrast to tracking and directional controls (which continuously send new commands at intervals roughly equal to the RateAdderTime), the Home command sends a single command to send the axis towards the home sensor transition point. When the RateAdderTime on that command expires (normally 60-80 msec later), the axis stops.

This problem may also result in the tracking error spikes seen below. This could happen if the RateAdderTime expires just before the next command is sent, causing the axis to briefly fall behind. 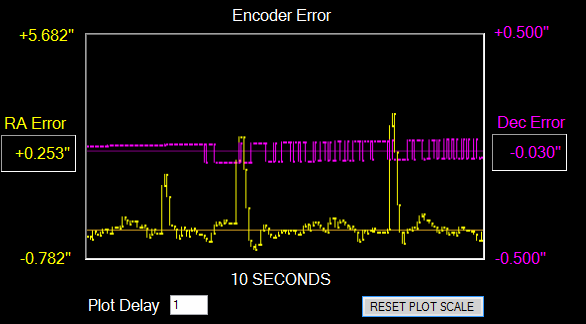 Only the Y axis seems to be affected by this bug. When the bug occurs, a negative rate is returned by the YS command. (Normally YS returns the absolute value of the currently applied rate.)

In cases where BaseRate+RateAdder is negative, an incorrect rate will take effect when RateAdderTime expires.

Note that the checksum is calculated as:

If you use the above binary command to control the servo controller, be sure to have a way to restart communication if the command gets out of sync by a communication fault.  If you receive a bad checksum, you should resync communication by sending a few of XXS commands.

and a command followed by a carriage return generates an appropriate response:

It seems that any non-uppercase characters are ignored, so this still generates a valid response:

More generally, it seems that all characters are thrown away except for:

Also, the input buffer on the controller seems to take the first 3 uppercase letters, and will ignore anything after that (up until the final \r) unless a numeric argument follows. For example:

Suppose the controller’s ACS state is unknown. Is it safe to always send a checksum even if it is not needed? NO, not in general. For example, “XA\rY” has a checksum byte ‘Y’. If you were to send two back-to-back XA commands:

the second command would be interpreted as “YXA” instead!

However, it is ok to send YXY\r\xe8 (Get ACS mode, with checksum appended) in either ACS or non-ACS mode since the \xe8 character will be ignored in non-ACS mode. Of course, this may not work if you are in the middle of sending an XXR or YXR payload, or if you are in the middle of receiving a PEC table (the first non-\r character will abort the table command/response loop), so you may need to send some extra bytes first to re-sync the command stream.

Note that it is possible to send commands to quickly if you don’t do strict request/response alternation. For example:

The first X\r would be a "return short status" command, but the second \r is treated as an invalid checksum. At this point we start with a fresh slate. X\r\x9A has a valid checksum, and returns the position of the X axis

The flash RAM values are loaded from the flash ROM to RAM on reset. Both the X and Y parameters are stored to the flash ROM.

Use X and Y for module address 1.

XEL / YEL / XE# / YE# can be used to get/set the error threshold, but these are only applied if the motor is moving “fast enough”.

According to Dan Gray:

The ServoII firmware will keep a motor moving if it’s already moving fast enough, and in the proper direction, and it will hold the error at the error limit. The threshold for this is 6 ticks in 1/1953 of a second… that is, if the motor has moved more than 6 ticks in the past ~512 usec, it will not trip. (This corresponds to an average speed of 11718 ticks/sec)

Also, if the output goes high for a long period of time, but the motor does not move, then it is sensing a jam up and will go to manual.

// Advance setpoint no more than MaxError ticks away

When the Servo II controller is connected to the computer via USB but the unit itself is powered off, it is possible to get garbage data back from the controller (perhaps because the serial pins are floating internally). For example, sending \r\n might result in the following response (including pin change events):

;He even figured out the code, all I had to do was re-compile!

;made the routine ResetCPU: really reset the cpu.  (added the load sfrpage, #0 instruction)

;PEC only collects data when guide buttons are pressed.

;Made safety provisions for CEMF.

;increased the tracking settings for runaway on bad encoder settings.

;This started at the yerkes telescope. THat one was increased to maximum almost.

;Checked that the offset tracking rates actually stop.  Kevin I. noticed this.

;Fixed the problem, it was in IFZERODptr

;added the voltage stabilized detection on startup, so if you spin the servomotors,

;and they backfeed into the controller, it won't erase the flash.

; Fixed bug in using CalcNewOffsetYScpEnc instead of CalcNewOffsetXScpEnc, so forcing the X scope encoder forced Y instead.

;fixed the FC function in interpret

;Added longer delay for the encoder chips to initialize.