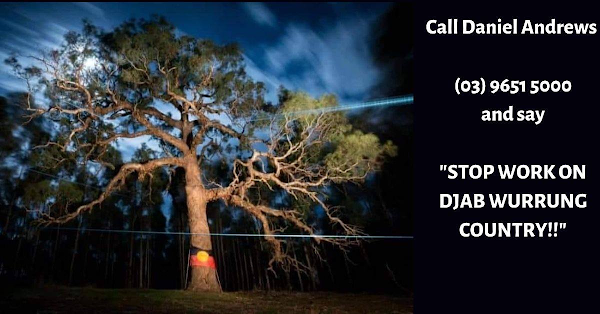 This document is for those in solidarity with the Djab Wurrung people who are protecting their sacred cultural sites against the Victorian Government’s highway extension plan. At least 250 trees that have been deemed sacred or culturally significant are under threat to build a highway that will save drivers THREE MINUTES of travel time. Below are the key actions needed at this time and background information drawn from the Djab Wurrung Protection Embassy. At the end of this document are email templates to send to relevant ministers, calling guides to provide to involved groups such as Vic Roads and Major Road Projects Victoria, details of the project managers, and the security and construction companies involved in the project.

COURT CASE DECISION: The state has decided that there is a strong case to answer in relation to the proposed road alignment upgrade that is currently set to destroy sacred Djab Wurrung trees. They are not allowed to destroy any more trees in the area surrounding the trees.

Things you can do to support:

Resources for those traveling to camp:

Click here for Facebook group for organising lifts: lots of action in this group with current updates and carpooling *pls note no guarantee this is a secure page*

If you are heading to camp, ensure that you have your own gear to be self sufficient and aren’t relying on people there supplying things for you.

Notes on solidarity from the Djab Wurrung Embassy: 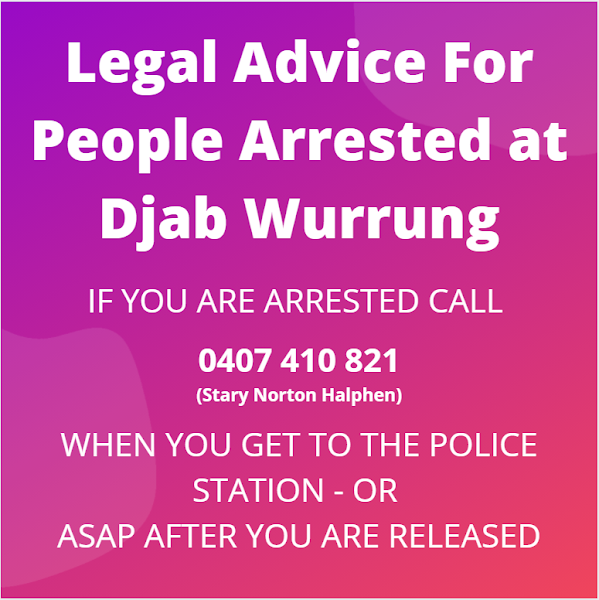 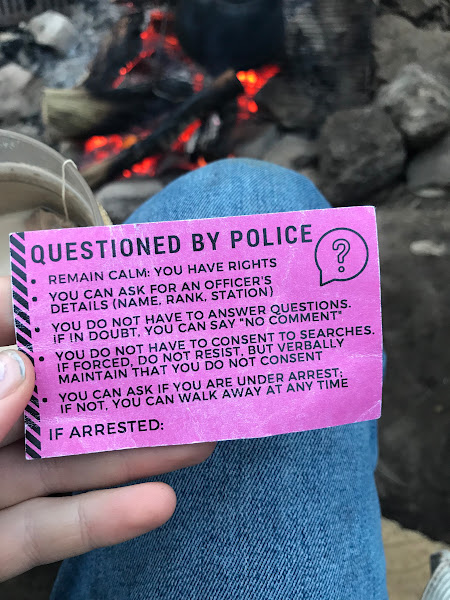 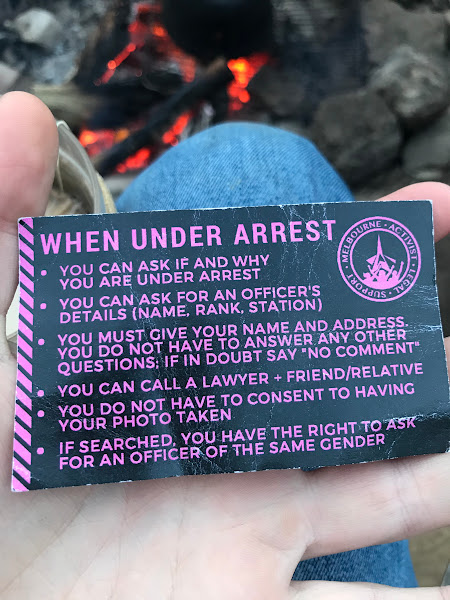 Contact government and relevant figures - and keep contacting them!

(TEMPLATES AND GUIDES AT END OF DOCUMENT)

The following people are obligated to listen to your concerns - this is their job:

** David Thomas is the Acting Manager of state-wide heritage operations in Aboriginal Victoria. He called someone back after they phoned Gabrielle Williams’ office and gave some information below:

“He explained the process of consultation with the Recognised Aboriginal Party - Eastern Marr and the Victorian Aboriginal Heritage Council who have both signed off on this plan and therefore giving Major Roads Victoria this supposed mandate. If we put some pressure on them and ask them to reconsider or to properly consider the wishes of the Djap Wurrung, this approach could have some merit. If those groups even slightly rescind their permission, it’ll make the case for saving the trees a lot stronger if the govt’s official consultation process approval was taken back and make give Aboriginal Victoria some power in advocating for the trees.”

CorSec: security guards still on country even after work agreed to stop. CorSec was hired by Major Roads Projects - call to demand why they are still on sacred Djab Wurrung land and complicit in cultural genocide

(update: Steve is on leave until 11 December and email contact regarding the Western Highway should go to contact@roadprojects.vic.gov.au)

Donating funds to the Embassy

For reference - a press release issued by Premier Andrews in February in which he declares that the freeway extension plans will be adjusted:

“The Embassy is protecting against the planned destruction of sacred trees that lie among the planned highway upgrade, which sit among a highly sensitive and significant landscape.”

Below are templates for emailing and calling. Feel free to use these, although it is always good to modify it with consideration of who it's for. You might also mention another related issue in order to prevent an auto-generated response on the part of the politician and their team. Suggestions are indicated below.

> If you do not cease work on this project, we will be boycotting your company

Note: They will try to handball you around to other contacts, you are speaking to them for a reason, keep them on the line.

I'm writing in regards to the removal and destruction of sacred trees on Djab Wurrung land as part of the Western Freeway Extension, urging you to cease works immediately. In particular, to cease the removal of trees and an unjustifiable police presence. The press statements from VicRoads regarding the consultation with Traditional Owners are false, and misleading, and the world is watching as you knowingly desecrate this sacred site. The recent destruction of the directions tree is abhorrent, particularly because it was done at a time when there were numerous barriers to accessing the site for Traditional Owners and supporters. What you are knowingly doing today is comparable to Rio Tinto’s destruction of the sacred Juukan Gorge caves.

The destruction of these sacred sites, which is inevitable under the current plans for the Western Freeway extension currently being undertaken by VicRoads, is an abrogation, fundamentally, of honouring and respecting current Victorian Treaty negotiations. If treaty is to be in any way meaningful it has to mean that non-Indigenous society understand and give way to Aboriginal law. This is Aboriginal law in practice, and VicRoads and the Victorian State Government is literally bulldozing over the top of it.

As a company that cites an Acknowledgement of Country in your email responses and purports to be “just and inclusive for all Victorians”, I am confused as to how VicRoads thinks these current works are appropriate given the cultural and environmental consequences. Further, I ask how the government can justify a Vic Roads and Victorian police presence at the site of trees that are no longer under threat, according to the Victorian Government's previous statements.

I'd also like to remind you of your duties under the Vic Charter of Human rights and the UN Declaration on the Rights of Indigenous Peoples (specifically Article 32 on free, prior and informed consent). These are blatantly being ignored, undermined and disrespected under the government's current plans.

I'm writing in regards to the removal and destruction of sacred trees on Djab Wurrung land as part of the Labor party's western freeway extension, urging you to cease both the removal of trees and use of police force.

Disturbingly, this is happening during Victorian Treaty negotiations. The destruction of these sacred sites, which is inevitable under the current plans for the Western Freeway extension, is an abrogation, fundamentally, of honouring and respecting current Victorian Treaty negotiations. If Treaty is to be in any way meaningful it has to mean that non-Indigenous society understands and respects Aboriginal law. This is Aboriginal law in practice, and the Victorian State Government is literally bulldozing over the top of it.

As a government that strives to be just and inclusive for all Victorians, I am confused as to how the government thinks these current plans are appropriate given the cultural and environmental consequences. Further, in light of the press release issued in February by Premier Andrews, and the stated amended route, I ask how the government can justify a Vic Roads and Victorian police presence at the site of trees that are no longer under threat, according to your own statement.

I'd also like to remind you of your duties under the Vic Charter of Human rights and the UN Declaration on the Rights of Indigenous Peoples (specifically Article 32 on free, prior and informed consent). These are blatantly being ignored, undermined and disrespected under the government's current plans.

Finally, I ask you to consider the related issue of

(include a recent related issue here relevant to the person's portfolio or broader political responsibility. If you have the headspace, this should be worded differently among everyone and might include the recent destruction of sacred sites by RioTinto, and/or demanding a response to the ways in which politicians on both sides of the political spectrum have been complicit in normalising and enabling the spread of white nationalism. Bring up police brutality and the use of force in arresting Djab Wurrung people on Tuesday Oct 27. Ask for them to articulate what changes they are making to enact their responsibility for the safety of Aboriginal and Torres Strait Islander people and people of colour in Melbourne and Victoria. The more specific the demand, the more attention the email should receive.)

I____ of_____ am a community member, (or) Traditional Owner strongly against/opposed to the harm, destruction and forced removal of the Djap Wurrung Sacred trees.

The current actions taking place on Djap Wurrung country are a physical threat to Traditional Custodians of the land, Elders and community members and is an act of genocide and ecocide.

If this work continues, it will have lasting devastating emotional, physical and spiritual effects on people connected to the sacred site and will affect our future generations. This is against community wishes, these sacred trees are protected by Traditional Custodians and the removal of these trees is against Djap Wurrung Traditional Law.

If you have any respect or wish to walk alongside First Peoples of Australia as a member of Parliament, you will reconsider your decision immediately.

I ask that you please call action to retract and stop any orders for workers / machinery to begin action, physical interference (attack) on our sacred sites as it poses danger to our community who are there on site, within their rights, on their country, protecting their heritage and culture.

“I am calling to register my protest of the Labour party’s Western freeway extension and their implications for sacred Djab Wurrung sites. Premier Daniel Andrews himself stated in February that the freeway extension would only be done in consultation with Djab Wurrung community members, so I have been horrified and disturbed to learn of recent destruction of and around sacred trees, and to hear of police trying to evict the Djab Wurrung Heritage Protection Embassy. I am particularly outraged at Victorian Police’s readiness to arrest community members who are fighting against ongoing threats to their culture. These processes not only uphold and continue Australia’s history of destruction of Indigenous land and disregard for culture, but they also fly in the face of Victorian Treaty negotiations. I believe it would be very unwise for the government to ignore the collective disappointment at these events. I insist that action is taken to adjust plans for the freeway, and I will continue to register my objections until these plans are actually followed through with.”